The program's ban on Twitter has been lifted to allow players to speak their minds. 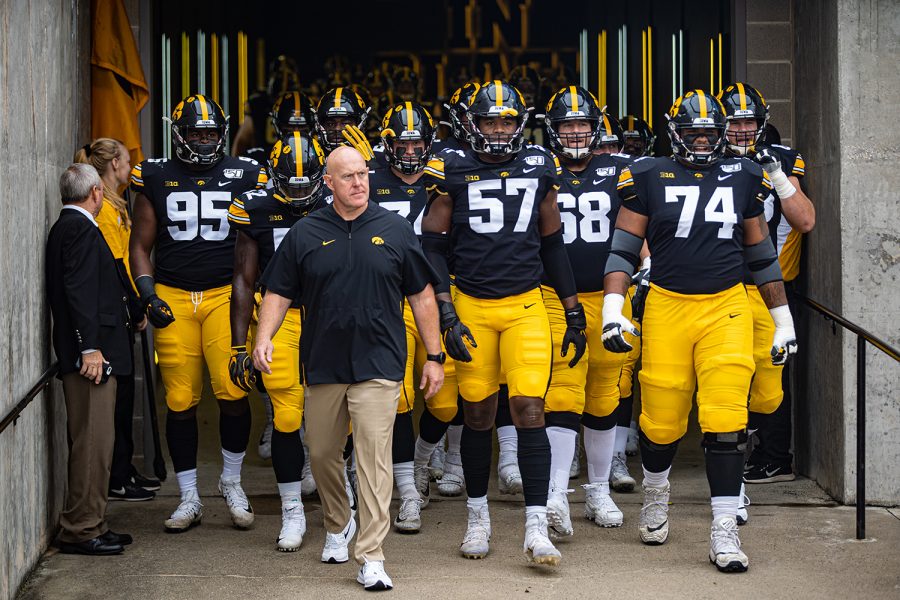 Iowa players walk out of the tunnel before a football game between Iowa and Middle Tennessee State at Kinnick Stadium on Saturday, September 28, 2019. The Hawkeyes defeated the Blue Raiders, 48-3. (Shivansh Ahuja/The Daily Iowan)

Dozens of former Iowa football players have spoken out recently with stories of racial disparities and mistreatment within the Hawkeye football program.

Iowa head coach Kirk Ferentz said on a video conference Sunday that he is committed to changing the culture within the program. One of the things the program has done is lifted its longtime ban on players using Twitter. Ferentz said that last week multiple players approached him about using Twitter to join the conversation going on nationally about the death of George Floyd.

Iowa originally was going to allow one pre-approved tweet per month. Iowa clarified Monday that it will not have any restrictions for its athletes on Twitter.

Now, current players have started to speak out on both the state of the program’s culture and the protests happening around the country.

“If you can not support us right now with this movement and with our team taking a knee during the national anthem, DO NOT support us during the football season. DO NOT watch our games on tv. DO NOT come up to us when you want photos. DO NOT ask us to give your kids autographs. DON’T COME TO US EXPECTING US TO DO FOR YOU WHEN YOU CAN’T SUPPORT THE BLACK ATHLETES ON THIS TEAM AND THE DECISIONS WE MADE AS A TEAM. I would rather play in front of 1,000 fans who care about us as people outside of football and what we are standing for, than 70,000 fans who only care about us when we are in uniform and on the field entertaining them.”

If you think you could possibly call yourself an Iowa Football fan and you can not agree with what I said and what this team is standing on. Then stop calling yourself a fan, IMMEDIATELY‼️ BECAUSE I CAN PROMISE YOU THAT WE DO NOT CARE‼️👎🏾 pic.twitter.com/DgYFY56ojv

“For the last four years I have been honored to be on a team full of people with different backgrounds and upbringings. I am forever grateful to Hawkeye Nation for the opportunity given to me to meet people from all across the country and world. Iowa, and connecting with people from such diverse backgrounds, has allowed me to see life, and people from a different perspective.

“It is our responsibility to be leaders in this community as well as within the University. We need to attack this problem at its root, to use this opportunity to make real, permanent change. In order to accomplish this, we must be able to communicate openly without fear of backlash, ridicule, threats and cancel culture. We must identify, call out, and not be taken in by instigators and violence. I will use this time to listen, learn and educate myself, to use prayer as a tool for healing and growth and to not let time and complacency destroy this opportunity to be a better person and a champion for change. Go Hawks!!”

“I am a black man in a world that is full of lots of horrific things. Throughout history African-Americans have been mistreated and we are tired of it, mothers losing their children. Now is the time when everyone stands together and fight for what is right! Yes, all lives matter, nobody is saying that they don’t but for right now everyone needs to unite because Black Lives Matter!

Everyone needs to speak! pic.twitter.com/8qTi8GSiAE

“On May 25, 2020, George Floyd, a 46-year-old black man died in Minneapolis, Minnesota, after Derek Chauvin, a white police officer, pressed his knee to Floyd’s neck for almost nine minutes while Floyd was handcuffed face down in the street whilst begging for air. This was a scene that was gruesome for the world to see and has incited a yearning for change all across the country. Sparking a revolution so strong that you’d have to try to ignore it.

“Beginning June 8, most of us Hawkeye Football players will be returning to campus to prepare for the season. Spending everyday giving our all studying film, in the weight room, and on the football field. All for the common goal of being ready to give our best to our Hawkeye fans on those beloved fall Saturday nights. It is now time to ask for our Hawkeye family to do the same for us.

“To do your best to spark change and luckily there is plenty ways for you to do it. Whether it be signing petitions, donating money to those helping the cause, educating yourself and your loved ones, or stepping out and marching alongside your Black counterparts. The time for change is now and the worst thing we could do at this time is take our foot off the gas. Thank you Hawkeye fans and I can’t wait to see the impact we can make together!”

Time for change is now, within our facility and outside of it as well. pic.twitter.com/nVsoxIIXzE

“As a white man I will never know what it’s like experiencing the injustices my teammates, family, and friends have experienced.

“As a white man it is my responsibility to educate myself on these injustices and always take a stand when I see them happening.

“As a White Iowa Football player I will stand by my brothers past, present and future and stand beside them in their fight to right the wrongs and create a world that is truly equal. Where my coach doesn’t feel like he has to put on a fake smile just so people don’t feel intimidated by him. Where my teammates can be themselves everywhere they go. Where everyone can feel the comfort I feel in every situation, no matter the color of their skin.”

I’ve marched beside teammates who I consider my brothers. I’ve chanted with them, and been by their side. This morning, I finally listened to them, and I realized the true magnitude of the issue we have in this country. I stand behind my family 100% ✊🏻✊🏼✊🏼✊🏾✊🏿 pic.twitter.com/BLQPKBXYn5

“In my time at Iowa I have had the opportunity to meet, work with and befriend players from a multitude of different backgrounds. Our experiences with the team have formed an un-breakable bond between us. A brotherhood. Although we are all unique individuals, we are all the same. Therefore, we all deserve to be treated the same. Where my teammates have a fight, I have a fight too. #blacklivesmatter”

Reposting my dog @Kaevon02 Cause he preachin to yall this morning💯 pic.twitter.com/eDvrweUvVK

“What happened to George Floyd in Minneapolis was beyond horrific. My heart grieved watching the news, and I am still stricken with sadness. My deepest condolences go out to the Floyd family as I stand in solidarity with them and the black community.

“My Iowa football family is facing similar challenges as we look to turn them into our defining moment. I condemn all injustice and pray for all who have been affected.

“It is my prayer that we as a nation will continue to be healed and through this we will seek to love God and love our neighbor as we love ourselves.”

“I stand with the black community.

“Someday must be today.”

“Over the last year in the Iowa football program my team has turned into my family. I can’t begin to imagine one of my family members falling victim to an unjust system.

“I stand beside my black teammates and ask all of Hawkeye Nation to do the same.

The people I swarm the field with on Saturdays are my family. My brothers. My brothers and I want to be the solution, not the problem. The time for change is now. pic.twitter.com/JS3FgHVVzP

“Things are tough right now, but I am committed to learning and growing with my teammates on the issues that exist in our world. This will only grow our bond as teammates and brothers when it’s all said and done. The one thing about Iowa Football, is that we have each other’s backs no matter what.

“Go Hawks and excited to get back to work!”

“Today I went through something that I would have never in my life thought I’d go through. When I joined this team last year I expected to join an elite football team with talented players but never in my life did I expect to join a team full of brave men who want nothing but positive change. I’ll be honest many tears rolled down my face during an hour and a half meeting of raw emotion and pain that we as players have felt during our short or long periods at Iowa.

“This program means so much to me and so much to so many of them. I’m thankful for every word that was expressed. We will get through this and there will be change. All I can ask from Hawk fans out there that if you don’t support the change that us Iowa football players are pushing for, go find yourself a new team to cheer for because this is far greater than football. Hope everyone out there is being safe and go Hawks!”

Today could have very possibly been the most powerful and impactful day in Iowa football history. I’ve never been more proud of my teammates and wholeheartedly believe positive change is in the works. I live and breathe Hawkeye football and stand with my brothers to take action.

“My heart hurts for the numerous events that have taken place in the last few days and weeks. I have not experienced what many of my former and current teammates have in their lifetime, but I want you to know I stand with you. Racism and social injustice cannot be tolerated in our country and we all must make an effort to change.

“What I love about our football program is that we have players from different ethnicities and backgrounds, yet we can all come together and develop friendships, bonds and a brotherhood like no other. I wish our country would do the same. For us to grow as a nation and as a football team, we have to be open-minded and empathetic, educate each other, and most importantly, get out of our comfort zones. The most difficult conversations will be the most important ones.”

“It’s time to change what some look at as ‘traditional’ and work towards a new wave that’s good for everyone.”

We as a black community have been silent for a very long time! We’re done doing and being taught we have to act a certain way or do certain things to make it in this world. LETS THRIVE TOGETHER! pic.twitter.com/8lpt354vTi

“I am a BLACK man in America. When I was born I already had two strikes against me. Many people see me as a THREAT… But some see me as INSPIRATION and MOTIVATION. What do you see me as?”