Mazin Mohamedali, who has been a constant voice at Iowa City's protests for the past several nights, was arrested Sunday on violation of probation, unlawful assembly, and disorderly conduct. 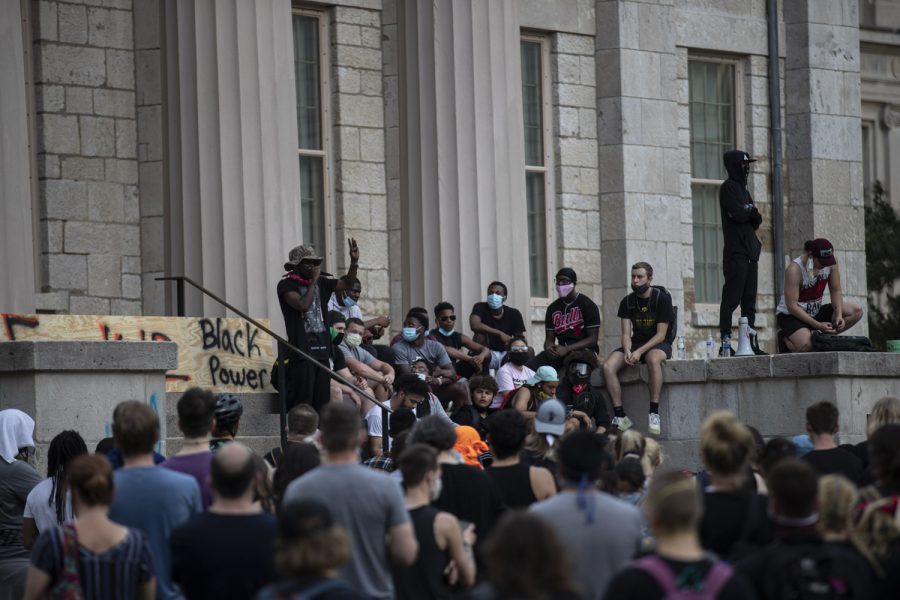 Organizer Mazin Mohamedali speaks to a crowd from the steps of the Old Capitol on Thursday, June 4 in Iowa City before beginning a march to support the Black Lives Matter movement and protest police brutality. Everyone met on the Pentacrest at 7 p.m. and then heard a handful of speeches before starting.

Update June 8: Mazin Mohamedali, a public face and constant voice in the protests across Iowa City over the past week, is being held without bond in the Marshall County Jail, where he was moved Monday, after a Sunday arrest.

According to criminal complaints released Monday, Mohamedali, 20, was arrested Sunday by Iowa City Police for disorderly conduct and unlawful assembly — both simple misdemeanors — related to a protest on June 3. He was also found in violation of probation, which is connected to a second-degree robbery conviction in 2018.

A probation complaint from the Department of Corrections references a quote from The Daily Iowan in which Mohamedali said into a megaphone in front of the Old Capitol after Saturday’s protest that the protesters should be “ready for war” when they return on Monday.

Rockne Cole, Mohamedali’s attorney, said he didn’t know whether Mohamedali had been targeted because of his activism at the recent protests.

“I’m not going to speculate as to what the motives are of the individual police officers or the public safety officers that made those decisions,” he said.

Cole said he was focusing on getting Mohamedali out of jail, but that the order regarding the Hope House would be the biggest obstacle to securing his release.

Authorities moved Mohamedali to the Marshall County Jail in Marshalltown, Iowa on Monday. Johnson County Sheriff’s Records Lieutenant Demetrius Marlowe said he did not know the reason for the transfer, but that inmates are often held out of county, and the jail tries to distance its inmates because of the COVID-19 pandemic.

Mazin Mohamedali, a public face and constant voice in the protests across Iowa City over the past week, was arrested Sunday on counts of violating probation, disorderly conduct, and unlawful assembly, according to the Johnson County Sheriff’s Office.

Mohamedali, 20, has been active in making speeches, leading chants, and talking with local leaders as the nightly protests have winded through the streets of Iowa City to landmarks including the Johnson County Courthouse, City Hall, and Kinnick Stadium.

Protesters marched through Iowa City on Saturday, some spray painting Kinnick Stadium and the University of Iowa Main Hospital. The protesters stopped on Highway 1 ahead of a line of dozens of Iowa State Patrol officers, and leaders decided to turn back rather than approach the line.

On the steps of the Old Capitol at the conclusion of the night, Mohamedali said leaders decided not to approach the state troopers because the protesters were not prepared. He said the group would be more prepared on Monday.

“Tell your friends if they care about you they’ll be here on Monday,” he said. “They will help you on Monday. They’ll be ready for war Monday.”

Mohamedali was arrested in January on an alleged controlled substance violation, possessing two plastic bags of marijuana, according to a police report. The case is still open.

The organizers of the protests, the Iowa Freedom Riders, have made several demands of local and state officials.

The demands include dropping charges against protesters, decriminalizing the use and possession of marijuana under 40 grams, the reduction of probation length, and no drug testing for marijuana.