Protest organizers decided to turn back before reaching a heavy line of Iowa State Patrol officers on Highway 1 Saturday night. 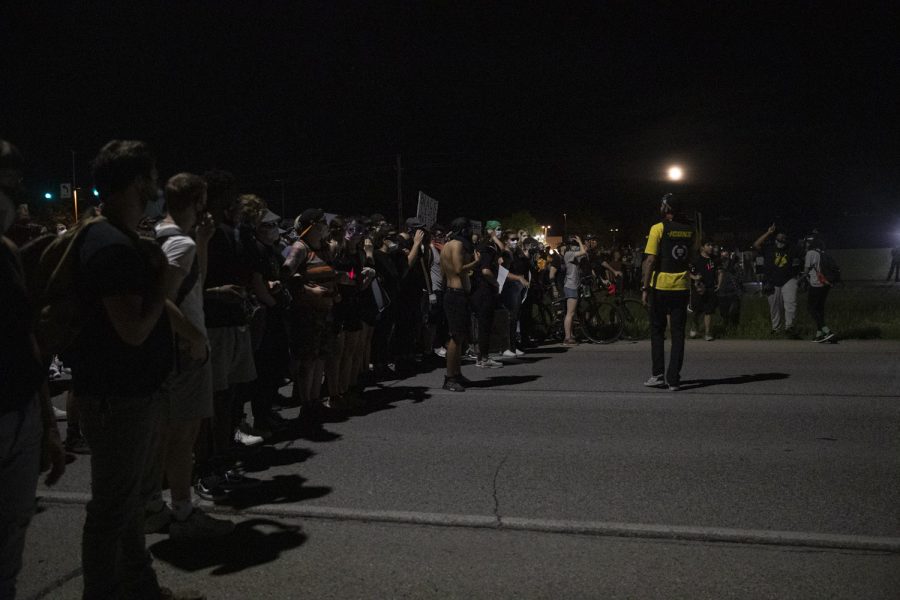 The front line of protesters participating in a march to support the Black Lives Matter movement and protest police brutality stands facing southwest across all lanes of Highway 1, west of the intersection of Sunset Street and Highway 1 on Saturday, June 6 in Iowa City. The group was planning to march towards a police line about a half-mile down the road. One protester at the front was explaining that the wind was blowing to everyone's right and that if tear gas was deployed they need to move to their left. The group would eventually decide to turn around and not confront the police.

Protesters in Iowa City avoided a confrontation with the Iowa State Patrol Saturday night that had formed a line on Highway 1 ahead of Highway 218. The crowd turned back before they reached the police line.

The protest began with remarks from several local officials, including every member of the Iowa City City Council. Protesters and leaders butted heads, and protest organizers, who have dubbed themselves the “Iowa Freedom Riders,” cut off multiple officials, asking them what their commitments were to meeting the protesters’ demands.

Among the demands of the group include removing School Resource Officers from Iowa City Community Schools and for the UI to cut ties with the Iowa City Police Department.

The group is also demanding the city to not allow the ICPD or Johnson County Sheriff’s Office to enforce evictions, and to reduce funding to the ICPD by 25 percent, and redirect that funding towards social services.

Following remarks from officials, protesters marched around Iowa City including through the hospital complex and to Kinnick Stadium.

Several people spray painted the outside of the stadium and climbed the gates.

Several black Iowa football players spoke out on social media this week about racism they’ve experienced in the program.

Standing on the statue of Nile Kinnick in front of the stadium, one protester called for the firing of head coach Kirk Ferentz.

“You know what he does to the people who make his team, who pay his salary?” she said. “He’s a racist piece of s— . We need to fire his ass.”

Ferentz earns $4.5 million a year, and is the highest-paid public employee in Iowa.

Protesters left from Kinnick and eventually reached the intersection of Sunset Street and Highway 1. Police lights flashed in the distance in both directions on the highway.

After heading Southwest toward Highway 218, the march stopped several hundred feet ahead of the police line and several organizers moved ahead to speak with the Iowa State Patrol officers on the road.

According to multiple protest organizers interviewed by The Daily Iowan, dozens of state troopers were lined up with more than fifteen squad cars. They were armed with tear gas, flash-bangs, and rubber bullets, according to the organizers.

Organizers who talked to the State Patrol said the officers had orders not to let the protesters through the line, and they told the organizers they would use the dispersal tactics if protesters moved past a designated boundary.

After a tense half hour in which the main crowd of protesters was waiting in place on Highway 1, protest organizers returned and said they would be going back to the Pentacrest.

Organizers said they decided to turn back to keep the protesters safe, and they were worried they would not be able to keep everyone from crossing past the boundary.

At the Pentacrest, protesters took down the fence that was set up around the Old Capitol and several stood and sat on the steps of the building. After more remarks from organizers and plans to return on Monday, the group disbanded at about 12:45.

12:30 a.m. – The protest has reached the Pentacrest. Organizers hand out pizza, chips and water.

After taking down the fence in front of the Old Capitol, several organizers and others gather on the steps of the building.

Iowa City resident Mazin Mohamedali, a constant voice throughout the week of protests, says into a megaphone organizers decided not to face the police line because they weren’t prepared, but he says the group will gather again on Monday and be more prepared.

“Tell your friends if they care about you they’ll be here on Monday,” he says. “They will help you on Monday. They’ll be ready for war Monday.”

Several people rush to crowd around spray painters with umbrellas and signs to shield them from photographs.

Protesters continue north on Riverside Drive toward the Pentacrest.

11:18 p.m. – After more than 30 minutes stopped on the highway, an organizer tells the crowd they’re returning to the Pentacrest.

Some are against the decision and the crowd begins to fracture, but the vast majority regroup and head northeast on Highway 1.

10:50 p.m. – The crowd has stopped on Highway 1 to regroup. Organizers call for people to spread out between the two sides of the highway.

People designated as medics, sporting glow sticks around their necks, group in the front.

One organizer tells the crowd that they’re not sure what the police presence is ahead, but that if they approach it will be “hell on earth.”

10:35 p.m. – Protesters gather facing west on Highway 1. Organizers instruct white protesters to get to the front of the group, and tell the crowd to write the number for the Eastern Iowa Bail Project on their arm in case of arrest.

They march southwest toward highway 218.

As they approach a police line, the crowd begins to chant, “Hands up, don’t shoot.“

Police lights flash in the distance in both directions, and leaders are warning the group again of the possibility of being tear gassed.

10:00 p.m. – The march stops and forms a circle at Sunset and Benton Streets.

After more spray painting, one man starts to play a song by Pop Smoke from his car and others begin dancing in the intersection.

They continue south down Sunset Street.

Protesters turn south on Sunset Road away from the police without any incident.

9:20 p.m. – Protesters indicate that an altercation with law enforcement is possible.

One leader with a megaphone tells the crowd to go home if they are scared and to take children home.

“This is your option tonight. If you feel that risk go home,” she says.

9:15 p.m. – After stopping at the intersection of For The Kids Way and Hawkins Drive, the march moves on to Kinnick Stadium. Several people spray paint the outside and climb the gates.

Several black Iowa football players spoke out on social media this week about racism they’ve experienced in the program.

Iowa strength and conditioning coach Chris Doyle has been placed on administrative leave effective immediately in wake of allegations by former players about racial issues within the program. An independent review will be conducted.https://t.co/cBgm7lqGS0

One protester climbs on the statue of Nile Kinnick in front of the stadium. She calls for Kirk Ferentz to be fired, noting he gets paid $4.5 million a year.

Ferentz is the highest-paid public employee in the state of Iowa.

“You know what he does to the people who make his team, who pay his salary?” she says. “He’s a racist piece of s— . We need to fire his ass.”

8:50 p.m. – Protesters stop at an open courtyard at UI Hospitals and Clinics. Some spray paint the walls and they continue to chant.

Leaders try to get the crowd to move out of the courtyard as hospital workers express concern about holding up operations.

8:35 p.m. – The crowd stops at the intersection of Burlington Street and Riverside Drive. Protesters chant “black lives matter,” while some spray paint the concrete.

At one point protesters part to let two ambulances through the crowd with some guiding traffic.

8:25 p.m. – Marching has begun. The crowd marches south down Clinton Street and west on Burlington Street, stopping in front of the Campus Recreation and Wellness Center.

Several hundred people are gathered as of now, chanting “no justice, no peace.”

8:05 p.m. – Elected officials and protest leaders continue to spar. Protest leaders want to hear commitments to bring about their demands, but officials push back that it will take time and policy conversations.

Iowa City Councilor Laura Bergus says the Council cannot commit to all of the protesters’ demands until the community has had a say in the decision making.

“Yes, I’m committed to the list but let me tell you something. All seven of us can’t stand up here and say we’re gonna meet every one of those demands and you know why?” Bergus said. “…Because everyone in this community has the right to weigh in our decision making and to see it in action. Thank you for being here, and we are going to make progress.”

“I’ll be damned if I’m gonna sit here and let y’all disrespect these people up here,” she says

Protest leaders challenge her as she says it takes time to affect change.

“We want to hear your commitments,” one person yells.

He invites the group to go to the State Capitol in Des Moines to speak to state legislators and the Gov. Kim Reynolds about their demands.

7:30 p.m. – Protest organizers, which have dubbed themselves the “Iowa Freedom Riders” begin to make statements for the crowd.

After two nights of going on to Interstate 80, city councilor Laura Bergus tweeted earlier tonight that state patrol may not permit protesters on the interstate. It’s unclear whether they plan to head there again.

I’ve had complaints about graffiti & noise. Calls asking for the National Guard. Someone too scared to come out of her home. Another saying all the protesters should be arrested. That is not the approach Iowa City will take. However, it’s not just up to us.

The plan is always to keep our protesters safe,” one leader said in an interview with The Daily Iowan. “That’s our number one plan.”

One leader reads off a list of demands the Iowa Freedom Riders have put together.

Among the demands of the group include removing School Resource Officers from Iowa City Community Schools and for the UI to cut ties with the ICPD.

The group is also demanding the city to not allow the ICPD or Johnson County Sheriff’s Office to enforce evictions, and to reduce funding to the ICPD by 25 percent, and redirect that funding towards social services.

7:20 p.m. – A few hundred people are gathered on the Pentacrest for the sixth night of protests in Iowa City. Spray paint covers the sidewalks and the facade of the Old Capitol, which is surrounded by a fence barrier about twenty feet out.

A stage is set up in front of the fence, which is a new addition. At the intersection of Iowa Avenue and Clinton Street a few organizers play music and hand out water and snacks.