Following a peaceful night of protests, Black Lives Matter activists and protesters against police brutality held a vigil for Breonna Taylor and led a crowd of a few hundred people in a march onto I-80. 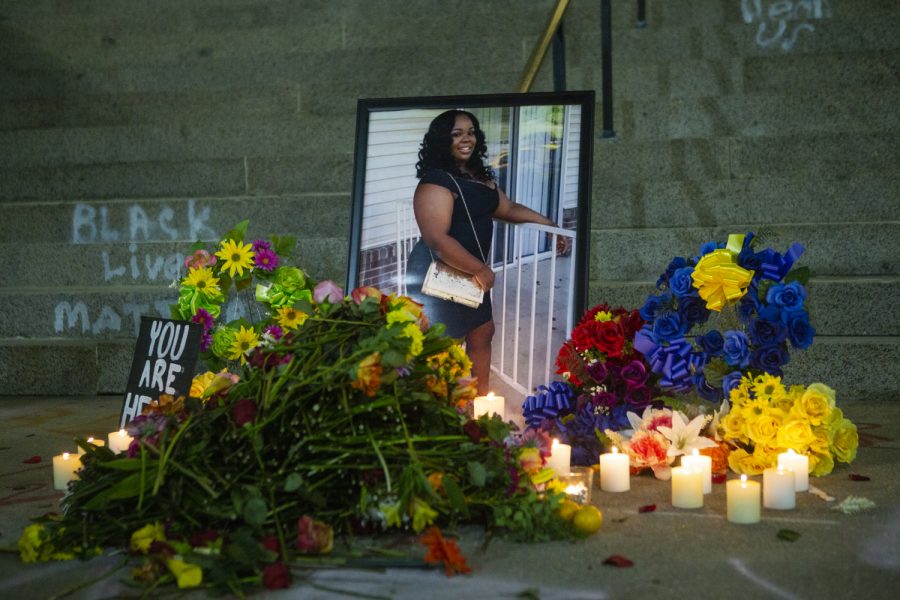 A memorial for Breonna Taylor is seen on Friday, June 5 at the bottom of the Old Capitol building steps. Protesters lined up to place flowers in front of a photo of Taylor, who was killed by police in her home on March 13, 2020. The crowd sang Happy Birthday to her on I-80 as well as on the Pentacrest lawn, as today would have been her 27th birthday.

Following a night of peaceful protesting on Thursday night, Iowa City protesters marched again to the interstate around 8:30 p.m. Iowa State Patrol blocked traffic from entering I-80, and protesters sat for more than an hour sharing personal experiences with racism.

Protest leaders also shared a list of 13 changes they are demanding from the Iowa City Council, adding that the protests will not end until changes are made by the city, or Gov. Kim Reynolds.

Friday also marked the birthday of Breonna Taylor, a black woman who was shot eight times by police in her Louisville, Kentucky home. Protesters held a vigil for Taylor on the Pentacrest after the march.

Taylor was killed two months ago by two plain-clothed police officers after they entered her home in the middle of the night with a “no-knock warrant” for Taylor’s address. Authorities believed a man involved in a drug ring lived at the residence, and Taylor’s parents filed a wrongful death lawsuit against the Louisville Metropolitan Police Department, and there is an FBI investigation.

Taylor would have been 27.

The Iowa City Police Department did not make an appearance until after the vigil around 11:30 p.m. Nearly a dozen police cars stopped in the middle of Clinton Street and police officers got out of their vehicles and lined the sidewalks. After a tense and unexplained interaction with protesters, the police officers left.

The Daily Iowan reached out to the Iowa City Police Department for comment after the protest ended regarding the reason nearly a dozen police cars were called to Clinton Street.

Here is what journalists for The Daily Iowan reported during events Friday night:

11:50 p.m. – Iowa City police have left the scene and protesters disband as well.

11:45 p.m. – Iowa City Police Department arrives on Clinton Street after fireworks were shot off in front of the Pentacrest. There appears to be a tense exchange between officers and the protesters left.

11:25 p.m. – The crowd appears to disband after holding a vigil for Breonna Taylor outside of the Old Capitol. Leaders thank protesters and announce that they will be here at the same time and same place tomorrow.

10:50 p.m. – Protesters have returned to the Pentacrest and are gathered around the Old Capitol.

10:30 p.m. – The group is passing the corner of Dubuque street and Park Rd. heading downtown.

9:30 p.m. – Protesters have gathered in a circle and leaders took turns rallying the crowd. One protest leader presents a list of 13 changes they are demanding from the Iowa City City Council. Protesters are told to follow the Instagram account, “Iowa Freedom Riders.” Individuals are now sharing personal stories.

View of protestors sitting on I-80 pic.twitter.com/SGH4cUt2pP

9:00 p.m. – Iowa State Patrol confirms with The Daily Iowan that they began blocking off parts of I-80 around the time protesters walked by Mayflower Residence Hall. There are about ten patrol cars around the entrance ramp, creating a path for protesters. The patrol officer said since protesters had attempted to march onto the interstate for the last couple of nights, they wanted to make sure no one got hurt. Patrol officers are not dressed in riot gear.

8:55 p.m. – Protesters are currently on I-80, singing happy birthday to Breonna Taylor.

8:50 p.m. – Protesters are on the ramp to I-80. Iowa State patrol cars were at the top of the ramp but did not interfere with protesters.

8:35 p.m. – Protesters are marching again, protesters functioning as medics have been instructed to stay in the middle of the crowd.

8:25 p.m. – Protesters are halting at the intersection of Dubuque St. and Foster Rd.

8:20 p.m. – Police cars are visible at the top of the hill, at the exit leading to the interstate.

7:55 p.m. – Protesters are marching down Clinton Street, chanting “Say her name: Breonna Taylor,” along with other chants.

7:45 p.m. – Things are getting started now with several hundred people gathered around the Old Capitol. Leaders have begun the protest by announcing that white supremacists are back in town, noting that the Iowa City Police Department and community leaders have been notified.

Leaders are beginning to march with the intent of returning to Interstate 80. Following the interstate, the plan is to return to the Old Capitol and hold a vigil for Breonna Taylor.

7:15 p.m. – A portrait of Breonna Taylor sits at the bottom of the Old Capitol steps. Some protesters are placing flowers and candles around it.

I will be live tweeting tonight’s Iowa City BLM protests for @TheDailyIowan. The crowd is smaller than other protests that happened this week, but there is a lot of graffiti on the Pentacrest. pic.twitter.com/pUdA3g0Jrv

7:10 p.m. – The crowd is still continuing to form, appearing to be smaller than previous nights. Last night, leaders announced that approximately 2,500 people had been present at a protest that remained peaceful throughout the night, with no clash with police as protesters were allowed down onto Interstate 80.

6:55 p.m. – A crowd is beginning to form around the Old Capitol building on the Pentacrest.