Protesters complete night of peaceful marching without police clash, march onto I-80

City leaders, including Mayor Bruce Teague, accompanied protesters around Iowa City on Thursday evening. The protest remained peaceful even as protesters made their way onto Interstate 80. 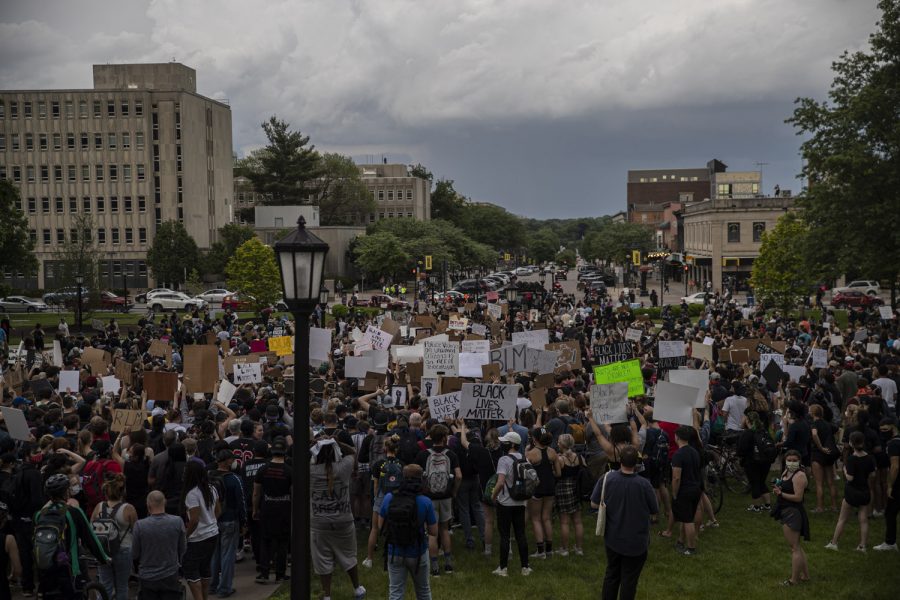 A march to support the Black Lives Matter movement and protest police brutality begins at the Pentacrest in downtown Iowa City on Thursday, June 4. The crowd, which contained about 2,500 people according to organizers, is seen here beginning the march by exiting the east side of the Pentacrest before they would head south on Clinton St.

Protesters marched peacefully for nearly five hours and ended the night with a call for legislative change at the state level and beyond by protest organizers.

Protesters reached Interstate 80 a little after 10 p.m. where police had blocked off traffic and allowed the crowd onto the highway.

Teague announced publicly earlier in the day he would attend the protests after he said he disapproved of the use of tear gas against protesters on Wednesday.

“Our heart is troubled. What happened last night is quite disturbing,” he told the crowd on the Pentacrest as the protest began. “We as a city council have made it very clear that we will not partake in such an act if you are going toward the interstate again.”

Protesters marched through pouring rain that began shortly after the crowd had left the Pentacrest, carrying drenched signs and chanting despite the brief downpour. A long line of cars followed behind, honking in time to chants or passing out water to protesters. Several people spray painted streets and buildings as the crowd progressed.

A little over an hour after marching began, the crowd headed in the direction of I-80. Teague addressed the crowd at the corner of Church Street and Dubuque Street, asking them not to go onto the interstate and to only cross the overpass above the interstate.

After marching down North Dubuque Street, protesters stopped at the on-ramp to I-80 East. Many spray painted on the road, and protesters broke into chants and dancing.

The crowd eventually made its way down the on-ramp to the interstate. The Iowa State Patrol rerouted traffic to keep the highway clear while occupied by protesters.

While Teague told The Daily Iowan he was disappointed protesters had wanted to go onto the interstate, he said he was happy that a collaboration with law enforcement had allowed the crowd to remain safe while they were rallying there.

“The good thing is that everybody is safe,” he said. “Everybody has had an opportunity to express themselves and I’m very grateful for that.”

When protesters regrouped at the Pentacrest at the end of the night, organizer and Iowa City resident Mazin Mohamedali called for legislative change at the state level and beyond to end police brutality against black people, directing his comments toward Gov. Kim Reynolds.

“We’re going to keep protesting and marching every day until we’re heard and until Governor Kim Reynolds makes a change,” Mohamedali told the DI after the protest disbanded.

Here is what journalists for The Daily Iowan reported Thursday night:

11:45 p.m. – The protest had dispersed. Some are still out downtown, but most have disbanded.

Protest organizer Mazin Mohamedali tells the DI that he feels “elated” after the night’s events and the presence of Iowa City elected officials, but that there is still more to do.

“That’s the change. That’s the power that we have. We are making our voices heard and they have to come out,” he says. “The city would have looked really, really bad if they had not supported us tonight and they did, and now it’s governor’s turn. Now it’s the state legislators’ turn.”

11:30 p.m. – After returning downtown, organizers are on the steps of the Pentacrest. They say they will be back every night until they are heard by Gov. Kim Reynolds.

10:45 p.m. – After spending about 20 minutes on Interstate 80, protesters head off the highway and back on to North Dubuque Street. Iowa State Patrol officers are cooperating with protestors, asking where they are going so they can continue to reroute traffic.

Mayor Teague follows behind the crowd. He tells the DI that although he was disappointed that protesters wanted to go onto I-80, his team was able to work with law enforcement to make it safe for protesters to peacefully rally there.

“The good thing is that everybody is safe,” he says. “Everybody has had an opportunity to express themselves and I’m very grateful for that.”

“We got this story out. We were heard,” she says.

10:20 p.m. – Crowds head down the on ramp and stand on I-80. The interstate has been blocked off by police. Crowds are chanting “black lives matter” and spray painting the medians. Cars are honking in the distance.

Police are blocking the interstate with at least five squad cars, both Iowa City Police and State Patrol. None are near the crowd.

Protesters are rallying on the interstate, many are lighting the way with their phone flashlights. About 5 police cars were present at the exit but have let protesters pass onto I-80 which is blocked off. One leader said there are approximately 2,500 people out here tonight.

People are dancing and spraying the crowd with bottled water. Some people have their backs and shirts sprayed with messages in spray paint.

Maybe tough to see on video but people are dancing, cheering and throwing water bottles. pic.twitter.com/XQ0rr4uwov

9:50 p.m. – Protesters encounter the police line at the exit. Police cars lined up along the road back up to let the crowd advance.

Police have closed off the interstate and are allowing protesters onto the road.

9:30 p.m. – Protesters stop at the intersection of Foster Road and Dubuque Street, the last intersection before the I-80 on ramp. The crowd stops and forms a circle around organizers.

Teague says they will go over the bridge and not on the interstate. Scouts on bikes are going further ahead to determine what the police presence near the highway is like.

9:15 p.m. – Protesters cross the Park Road bridge and go north on Dubuque Street past Mayflower Residence Hall, still going in the direction of the interstate.

8:50 p.m. – The crowd of at least 2,000 begins in the direction of the interstate. Organizers tell protesters to take out their contacts if they’re wearing them and others start handing out goggles in case they encounter police with tear gas again.

A protester with a trumpet leads the way as Mayor Teague addresses the crowd again.

Mayor Teague is speaking. He is urging protestors to stay on the street and not go on the interstate.

“This is going to be the safest night ever. I don’t want anything to happen to nobody,” he says.

Teague tells protesters to stay off the interstate, and some organizers agree.

8:40 p.m. – After the rain stops, the crowd begins heading north down Clinton Street.

The crowd chants, “hell no, we won’t go.” Some protesters carry waterlogged signs and continue down Court Street.

8:00 p.m. – Thunder and lightning appear in the skies over downtown.

Thunder, lighting, and light rain has begun as the crowd reaches the corner of Clinton and Court Street. The crowd is chanting, “I’m going nowhere.” pic.twitter.com/vnIJ7vv1tn

7:50 p.m. – One organizer yells, “Get off the sidewalk, get on the street,” and a few protesters begin to take out spray paint.

7:35 p.m. – Teague says police will not use force against protestors if they head for the interstate again.

The Iowa State Patrol were the ones who made the decision to use dispersal tactics Wednesday when protestors went in the direction of Interstate 80, Teague said in a livestreamed address Thursday.

Things are getting started. Teague is speaking to the crowd on the steps of the pentacrest. Says “what happened last night is disturbing.”

“Our heart is troubled. What happened last night is quite disturbing,” he said. “We as a city council have made it very clear that we will not partake in such an act if you are going toward the interstate again.”

“Iowa City Council hears you loud and clear,” he says.

7:20 p.m. – Before the protest begins, a speaker with Eastern Iowa Community Bond Project speaks to the crowd, asking for donations, especially from white allies, to help bail out anyone who might get arrested throughout the night. Prairie Lands freedom fund made a similar announcement.

An organizer begins by addressing last night’s events, when Iowa City Police used tear gas and flash-bangs on the protesters.