During the third consecutive night of protesting in Iowa City, protesters attempting to march onto Interstate 80 were met with flash-bangs and tear gas after confronting police on Dubuque Street. 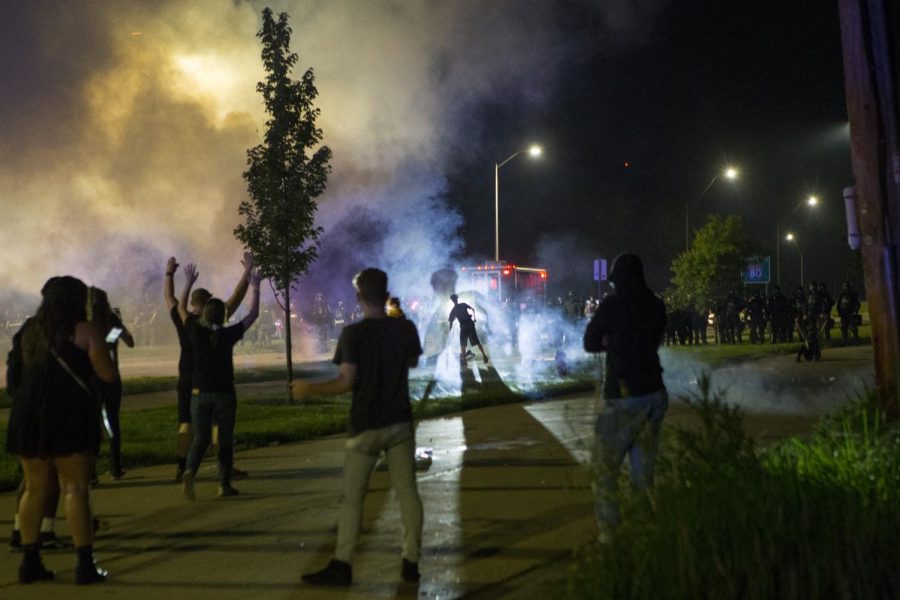 A protestor puts their bicycle on the ground before sitting down in front of police officers. Officers fired tear gas on the crowd after protestors disobeyed an order not to advance. Several protestors reported that none of the protestors made physical contact with officers before being tear gassed unexpectedly. This protestor sat on the ground amid a cloud of tear gas for several minutes.

Law enforcement officers set off flash-bangs and tear gas Wednesday night on protesters who, according to multiple people on the front lines of the protest, had not been physically violent.

A march that began on the Pentacrest at 6 p.m. covered a great distance throughout Iowa City until a standoff with officers on Dubuque Street occurred as the crowd was headed toward Interstate 80. Dozens of law enforcement officers and a few police cars with lights flashing were lined up blocking the road.

The march marked the third consecutive night of protesting in Iowa City as protests against police brutality in all 50 states have sprung up following the death of George Floyd, a black man in Minneapolis who died after a white police officer kneeled on his neck for at least eight minutes.

According to several protesters interviewed by The Daily Iowan, law enforcement officers told the crowd not to advance, and when some people advanced, officers used dispersal tactics on the crowd.

A tense hour followed as protesters ran away from the gas, only to rally when it cleared and return to the line of officers.

One man suffered a seizure after the first round of flash-bangs and was taken to a hospital by an ambulance.

Tear gas and flash-bangs were used at least six times until the crowd disbanded around midnight.

UI student Tina Deng, 20, said the tactics used by the officers were unwarranted since the crowd had been peaceful until then and remained peaceful after.

“It was really messed up because I feel like the only time you should be able to use tear gas, flash-bangs, all that, is when there’s a riot going on,” she said. “But it wasn’t a riot, it was a peaceful protest. And they tear-gassed everyone who was standing there peacefully with their hands up saying, ‘don’t shoot.’”

In 2016, demonstrators marched onto I-80, briefly halting traffic after the election of President Trump.

Here is what journalists for The Daily Iowan reported Wednesday night:

12:30 a.m. – A small number of protesters are still gathered on the Pentacrest, but the vast majority have disbanded.

UI student Tina Deng, 20, was with the protesters when police used flash-bangs and tear gas on the crowd. She says, along with many others who were in the front of the crowd, that there was no aggression from the protesters before the dispersal methods were used.

“The only time a tactic like that should be justified is when the crowd is rioting or attacking the police themselves,” she said. “But if a crowd is standing there with their hands up peacefully saying ‘don’t shoot,’ there’s no reason for those tactics to ever be put in order.”

12:00 a.m. – After being dispersed with flash-bangs and tear gas, protesters disband and leave the police line.

Some told the Daily Iowan they’re going home, while others shouted that they were going back downtown.

11:30 p.m. – Police use more flash-bangs and tear gas to disperse protesters. One protester remains standing in front of police even as most protesters temporarily back away. Others circle the crowd asking if anyone needs medical attention.

11:15 p.m. – Police use flash-bangs and tear gas to disperse protesters on the corner of Dubuque Street and Foster Street.

A protester calls, “stand your ground,” as the crowd chants, “no justice, no peace.” Some protesters wash out their eyes a short distance away while others pass out water and gloves.

The crowd has encountered the police, dozens are lined up in the street with a few cars with their lights on. pic.twitter.com/TSpihLLSJP

While they chant “hands up, don’t shoot,” organizers direct white protesters to move to the front of the line and link arms while they advance toward the officers.

10:50 p.m. – The protest stops in front of Mayflower Hall, and protest organizers tell people to write a number to call for bail on their arms should they get arrested.

Further down the road, organizers tell everyone but people functioning as medics to kneel in order to identify who to go to if protesters get injured.

10:30 p.m. – En route to I-80, the protest stops at Park Road and several protesters spray paint the concrete.

A few people set off fireworks in the street and on the steps of the Beta Theta Pi fraternity house.

Several people are sitting on top of cars behind the crowd. Some wave flags and play music.

10:00 p.m. – Nobody in the crowd disperses, and several protesters indicate they’re moving toward the interstate. They move west down Jefferson Avenue then north on Clinton Street, chanting “No justice, no peace.”

Organizers calling for protestors to head for the interstate. Group is currently on N. Dubuque, a mile and half or so up the road from the I-80 ramp.

One protester with a megaphone says they want to get everyone home safe, and that they’ll give some more remarks and then disperse.

However, another protester with the megaphone says they’re not going to stop, and that things may get tense with the police.

He notes that police have had a bigger presence every night of protesting. He instructs white protesters to form a circle around the others when the police arrive.

9:30 p.m.- The crowd has moved down Iowa Avenue to Dubuque Street after a fair amount of protesters seemed to split off from the main crowd.

People continue to spray paint as the procession moves to the Ped Mall.

At the Graduate Hotel, illuminated by blue lights in front of the building, protest leaders give more remarks to the crowd, and the protest quickly moves north down Dubuque Street.

9:05 p.m. – After several minutes where many protesters were yelling at police, the crowd is back on the Pentacrest, with nearly twice as many people as when marching began.

Police are lined up in front of the Old Capitol, and two protest leaders were let by to stand on the front steps of the building.

One protest leader addresses the new charges brought up Wednesday against Derek Chauvin, the officer who pressed his knee into George Floyd’s neck, causing his death.

Crowd gathered on the Pentacrest – looks like it’s grown since the start of the march. pic.twitter.com/vBBus61D40

“Second degree murder is not enough,” he shouts into a megaphone.

8:40 p.m. – As the procession reaches City Hall they pass about 25 police officers in helmets and vests.

Protesters circle the block, where more officers with riot gear and batons are lined up at entrances to alleys and the parking garage.

Police do not take off their helmets and vests after repeated calls from the protesters. The crowd chants “take off your riot gear, we don’t see no riot here.”

About 25 officers in helmets and vests outside Iowa City City Hall pic.twitter.com/zX5WmmDW8V

8:15 p.m. – Protesters continue down Gilbert Street towards downtown. Traffic follows behind marchers, with some protesters sitting on top of vehicles and hanging out of the windows.

7:55 p.m. – The group stops at the intersection of Gilbert Street and Highway 6. Protesters again spray paint the intersection, while others form a circle around them. A man driving out of a nearby parking lot makes an obscene hand gesture at the crowd, then gets out of his car to film the demonstration.

A few protesters run up to the car while others stay in the circle and shout. After a tense exchange between the protesters and the man, he gets back in his car and drives away.

7:30 p.m. – As they reach Highway 1, protesters clear the street to allow two ambulances with lights on to pass.

Late to Twitter, but I’m covering protests in Iowa City this evening for @TheDailyIowan. Protestors blocking traffic at the intersection of Highway 1 and Riverside Drive. The crowd is parting to let an ambulance through. pic.twitter.com/ZVHzU2nCLc

7:15 p.m. – Many protesters hop a barricade set up on Capitol Street and continue south down the street. Chants of “no justice, no peace” and “I can’t breathe” are constant as the crowd marches.

Police have set up fences 50 feet out from the building, blocking the protesters from getting closer.

Protesters speak into a megaphone to police, who are wearing helmets and holding riot shields. A chant of “take it off” breaks out but police do not remove any of their gear.

The protest then move to the Johnson County Jail.

Police in riot gear move with protesters towards the jail, where barricades are placed in front of the building. Protesters continue to call for police to remove their riot gear.

6:40 p.m. – The march stops at the intersection of Washington and Linn Street. Protesters make a circle around the intersection and some in the middle spray painted slogans on the street and on the walls of surrounding buildings.

The protesters then make their way down Linn Street toward the Iowa City Public Library.

Chanting “Black Lives Matter,” protesters are making their way down Linn street toward the public library. Some along the way are spray painting sidewalks and buildings. pic.twitter.com/QHJSQpuRJB

At Linn and Burlington streets, protesters again circled around the intersection while some spray painted the street.

6:30 p.m. – After organizers rally the crowd on the steps of the Old Capitol with a chant of “no justice no peace,” the protesters march down South Clinton Street and onto Washington Street. Intermittent chants of “say his name, George Floyd,” and “Black Lives Matter” are heard.

A few hundred gathered on the pentacrest now for the third consecutive night of protesting in Iowa City pic.twitter.com/haJGOl04el

6:14 p.m. – A few hundred people gather on the Pentacrest and congregate around an empty chair seated on the University of Iowa seal at the intersection of Clinton Street and Iowa Avenue.

Organizers are handing out water and packaged food.

Xavier Dove, one of the people who helped organize the protest, said he hopes tonight goes more peacefully than previous nights.

“I expect it to be a lot more organized today,” he said. “I don’t expect us to like walk as far, do as much damage as yesterday since we’ve got everybody’s attention.”

*Rylee Wilson contributed to this report.