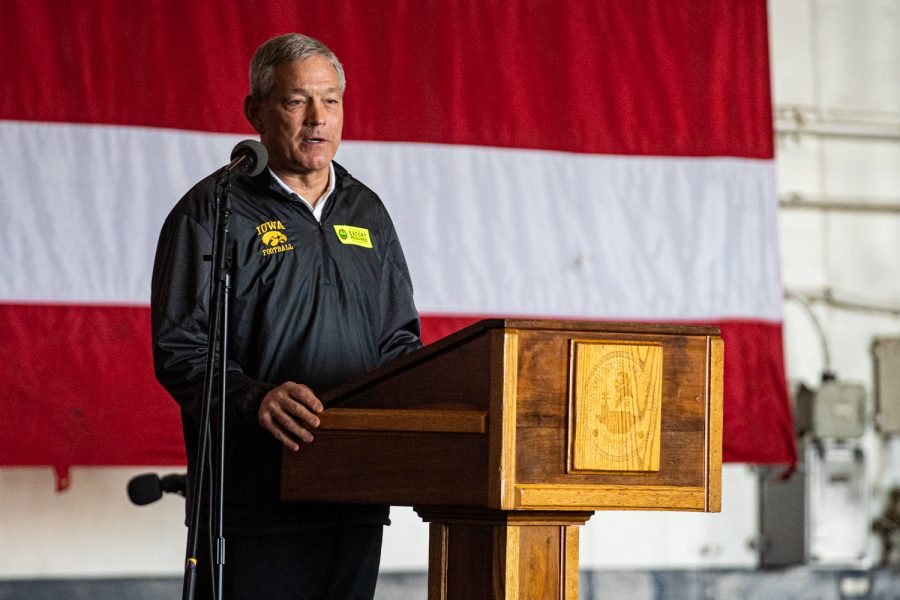 The Iowa football team is allowed to return to team facilities and begin voluntary workouts June 8, but things are going to look different.

A limited portion of the Iowa football coaching staff returned to the team facility June 1. Before entering the facility, the coaches — including Ferentz — were tested for the novel coronavirus. With athletes returning next week, additional measures have been put in place to help mitigate the risk of the virus.

Along with being tested, Ferentz said players and staff will have their temperatures taken before they enter the team facility. Medical surveys will be provided daily and wrist bands will be worn in the building as a sign of clearance.

Ferentz said there is currently only one entrance being used to get into Iowa’s football complex, and that players and staff will also be evaluated before they exit the building.

“A huge component for every one of us is just everybody taking personal responsibility,” Ferentz said. “Really exhibiting a new level of discipline, paying attention to the guidelines that have been set… All this with the understanding that if we do a good job that we have a chance hopefully to play football this fall. That’s something that’s important to all of us certainly.”

Iowa’s veteran players will return to the facility in waves starting June 8. On June 15, 24 first-year players will also join the team.

While inside the facility, Ferentz said everybody will be practicing social distancing and that masks will be provided. Iowa’s weight room is large enough, Ferentz said, that athletes can be spaced out while they work out. Equipment will also be sanitized after each use.

Ferentz is most concerned about what will happen when the team is not inside the facility.

“When they’re in our facility, at least we know there’s going to be good hygiene practice,” Ferentz said. “There’s going to be thorough cleaning. And we can instruct them on distancing and all those sorts of things. So you can really minimize the risk.”

Other athletic programs across the country are also making the move back to team facilities this week. Iowa State announced Wednesday that four student-athletes in two different sports are in quarantine and awaiting COVID-19 test results. Three Oklahoma State football players have tested positive for the virus, the school announced Wednesday, and 247 Sports reported that freshmen football players have been told not to report to campus.

Iowa Athletic Director Gary Barta said last week that he expects there will be students or staff on the University of Iowa campus that get the virus despite the precautions put in place. Ferentz acknowledged that risk and said that the program has a plan if that were to happen.

“We have a tremendous medical facility here and more importantly we have outstanding medical care from the physicians that work with our athletes,” Ferentz said. “So we’ll defer to them. I know the plan is to quarantine those individuals whenever that may happen. And the reality is it probably will happen at some point.”