The Daily Iowan spoke with organizers who were present when peaceful protests turned violent on Friday night. 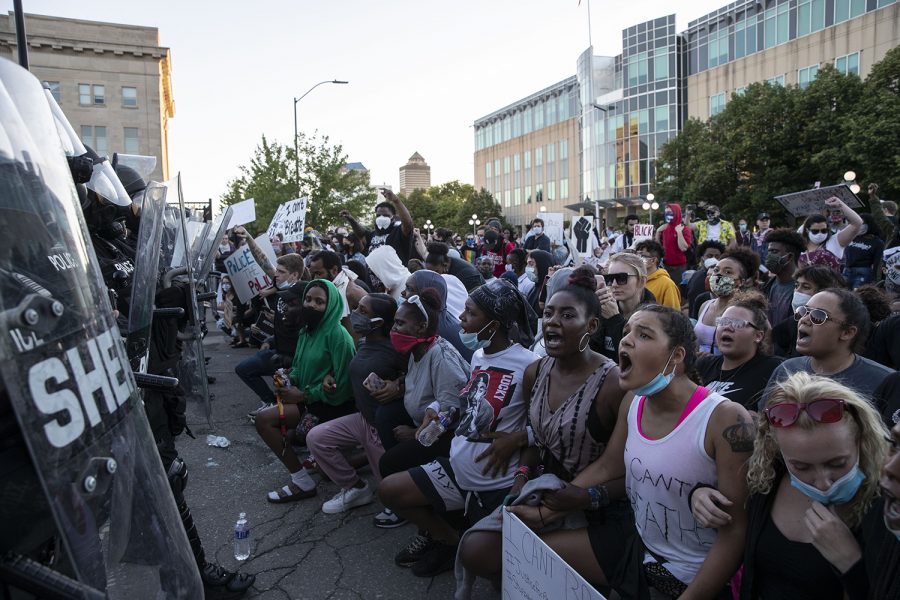 Protesters kneel in front of the police barricade during a protest outside of the Des Moines police station on Friday, May 29, 2020. An organized peaceful rally in honor of George Floyd and other victims of police brutality turned to violence following the event. Protesters threw water bottles at police while police sprayed tear gas and flares were thrown.

Violence followed the conclusion of a peaceful protest in front of the Des Moines Police Department on Friday.

In the days following, Iowa State Rep. Ako Abdul-Samad, D-Des Moines, and Lead Organizer of ‘Rally for George Floyd’ Michael Turner spoke with The Daily Iowan about the peaceful protest and the events that followed.

Turner said the primary goal of the protest he organized was “to show solidarity and support for anyone who has been affected by racism or police brutality in America.”

Turner left at around 7:40 p.m., about 40 minutes after the organized protest’s allotted time had ended.

Many protestors stayed near the police department before approaching squad cars parked at the end of the street.

Those who were there shared mixed feelings with The DI in short conversations among shouting protesters, vandalized police vehicles, and officers in riot gear using pepper spray, tear gas, and flash-bangs.

Abdul-Samad continually adjusted his strategy to disperse the crowd, including selecting five people to speak directly with police officers. He said he estimated that three of the five selected were able to speak to officers before agitators disrupted communication.

Leading up to the protest, the representative has been working with families and looking into hate crime laws following an incident in which two white men assaulted a young black man.

He said two things need to happen after the protests and the violence that followed on Friday.

The second is to work with the Police Department and citizens to facilitate communication, which will include addressing citizens’ concerns.

As a state representative, Abdul-Samad said that in addition to woring with community members and police, he has also been looking into legislation. “So it’s been on several levels here as a state legislator being able to look at different avenues to give Iowans some answers but also provide some resources.”