Marianette Miller-Meeks, who is seeking election to the U.S House of Representatives for the fourth time, won the Republican nomination with 47 percent of the vote. 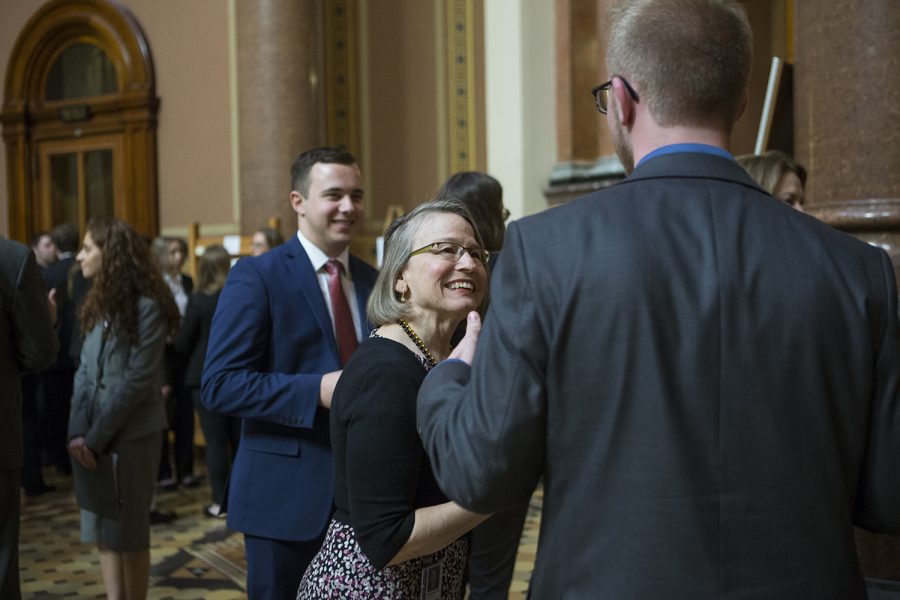 Senator Mariannette Miller-Meeks speaks with a member of UISG during the Hawkeye Caucus at the State Capitol in Des Moines on April 9, 2019. The Hawkeye Caucus provides members of the University of Iowa community to come speak with Iowa legislators.

State Sen. Marianette Miller-Meeks, R-Ottumwa, won the Republican nomination for Iowa’s 2nd Congressional District with 47.54 percent of the vote at press time, after a contentious campaign against opponent Bobby Schilling.

Miller-Meeks spoke to reporters ahead of the polls closing on Tuesday evening. She said though this is her fourth attempt at winning the 2nd district race, she is drawing on experience from previous campaigns.

“The one thing I learned from previous campaigns is that fundraising is important to do early, and that’s a lesson I learned very well,” Miller-Meeks said. “Our fundraising, given that we’re in a top primary, we’re very pleased with what we’ve done and we expect to continue to ramp that up as we go into the summer.”

Speaking with reporters, Miller-Meeks said although Hart did not have to spend campaign funds in a competitive primary, she was able to gain experience for the general election through the primary campaign.

Miller-Meeks was heavily criticized by opponent Bobby Schilling, whose campaign leaked footage of her calling herself pro-choice in 2018.

Miller-Meeks ran several attack advertisements against Schilling, characterizing his move from Illinois to Iowa as an electoral strategy.

Schilling announced he had been diagnosed with cancer less than two weeks before the primary election, and that he would continue to run an active campaign.

Schilling’s son, Terry Schilling, who took over official campaign duties while Schilling recovered from surgery, called for a ceasefire in the contentious campaign between the two candidates, though it was short-lived as both candidates continued to run negative statements against each other in the final days of the campaign.

Schilling released a statement conceding the race to Miller-Meeks.

“I just called Mariannette Miller-Meeks to congratulate her on her victory. I am proud of the campaign we ran. Tonight we came up short,” Schilling said in a prepared statement. “That’s okay. I look forward to supporting both Donald Trump and Miller-Meeks in the fall.”

While polling locations were open for Primary Day, Iowans were highly encouraged to vote by mail to reduce the risk of spreading COVID-19. Voter turnout statewide was reported to be nearly 24 percent at the time of press.

The district has been rated a toss-up by the Cook Political Report, with either party having a solid chance of winning the general election in November.

Iowa 2nd District has been represented by Loebsack since 2007, who’s not running for reelection, and was previously represented by Republican Jim Leach.

“Congratulations to state Senator Mariannette Miller-Meeks on securing the GOP nomination in the second congressional district,” Iowa Republican Party chair Jeff Kaufmann said in a statement Tuesday. “After over a decade of failed leadership from Dave Loebsack, it’s time to flip this district and elect an effective leader.”