A protest in Iowa City that began at the Old Capitol Monday night remained mostly peaceful aside from a shattered glass door at City Hall and some tense moments with city and county police. 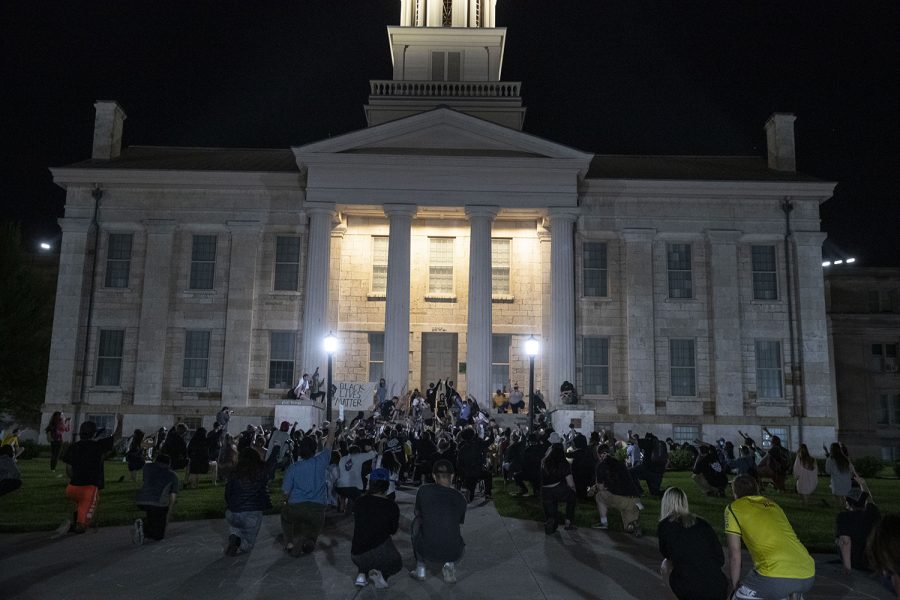 Protesters gather on the Pentacrest for a moment of silence during a protest in Iowa City on Monday, June 1, 2020. Protesters walk through downtown to the Johnson County Jail where they interacted peacefully with the police. Protesters then moved to the Iowa City Police Department where they smashed windows on a door.

A night of protesting unfolded across Iowa City Monday night to protest the death of George Floyd and police violence against black people. The night ended with minor property damage and no major altercations between protesters and Iowa City and Johnson County police.
Old Capitol – 21 N. Clinton St.
A couple hundred protesters first gathered on the Pentacrest. Illuminated under the lights on the steps of the Old Capitol building, protest organizers led the crowd in chants of “black lives matter” and took a knee for a moment of silence in honor of Floyd, a black man who was killed in Minneapolis after a police officer pressed his knee into Floyd’s neck for at least eight minutes.

After the crowd chanted, “take a knee,” the officers kneeled.

Some protesters attempted to facilitate conversation with the police officers. Some people in the crowd interrupted intermittently with shouting and chants, while some would try to quiet the others.

After being given a megaphone by protest organizers, Johnson County Sheriff’s Sgt. Jeff Gingerich said he felt sick watching the video of Floyd’s death. A protester asked him what he would do to stop black men from being killed by police.

“I wish I had an easy answer for you,” Gingerich said. “I think you guys are doing what you need to do to make change.”

Shortly after, the protesters moved on to the Iowa City Police Department, which is connected to City Hall.
Iowa City City Hall – 410 E. Washington St.
Standing on the front steps of City Hall, a few protesters took turns speaking into a megaphone about their experiences with racism, some calling on the mostly white crowd to take their activism into their personal lives and have conversations with friends and family about racist ideology.

A particularly vocal speaker throughout the protest then announced that the night was about to turn violent, and called for people to leave if they did not want to participate.

Some people on the top steps then threw rocks, shattering the glass in one of the front doors of the police station, but no further damage occurred.

RELATED: Hundreds gather at Pentacrest for ‘Say Their Names’ rally against police violence
Johnson County Courthouse – 417 S. Clinton St.
Shortly after, the protest moved from City Hall to the Johnson County Courthouse. At the courthouse, a few protesters spray painted “BLM” (Black Lives Matter) on the street and the side of the building.

Police officers arrived soon after and lined up in front of the courthouse. After calls from protest leaders, white protesters moved to the outside of the crowd and linked arms to encircle the others.

After being asked to disperse by the police, the protesters returned to the Old Capitol. After one last chant of “black lives matter,” the protest ended shortly after midnight.

Darnel Murphy, who attended the protest, said compared to other cities, the protest in Iowa City was fairly peaceful, aside from the shattered glass in the door at City Hall. He said emotions were running high, and that organization and leadership prevented it from getting out of hand.

RELATED: Protesters and police clash after rally in honor of George Floyd in Des Moines

Murphy said he’s not sure whether peaceful protesting is more effective than the rioting that has been taking place in other cities.

“We’ll only know if it was effective at the end of it, what’s the end result,” he said. “We just did a peaceful protest. If we get results from this peaceful protest and they got results in the violent protest, then it’s like, was the violence really needed?”