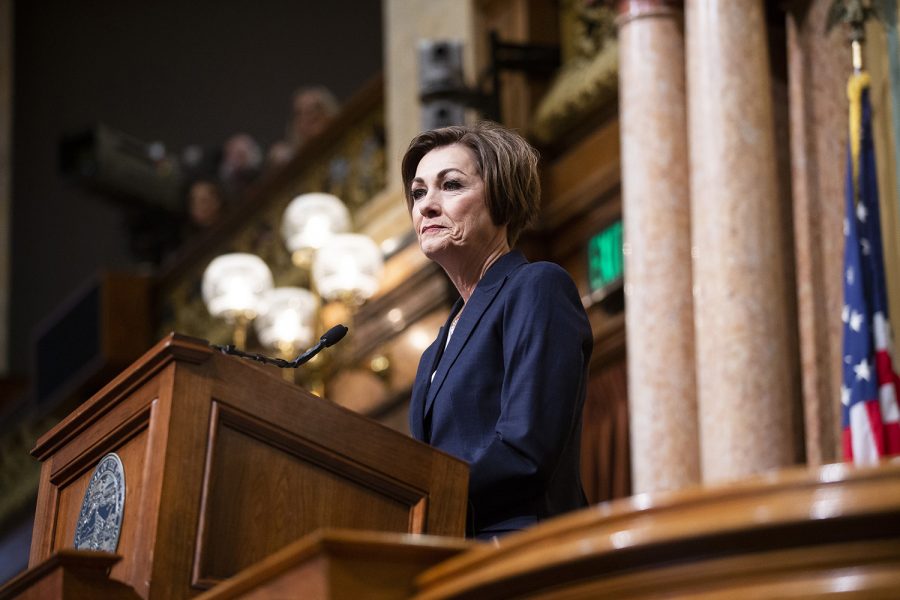 “Under my order, they stand ready to assist and support when and if that time occurs,” Reynolds said of the National Guard at a press conference Monday.

Peaceful protests turned to rioting in several Iowa cities throughout the weekend. On Saturday, 74 protesters were arrested in Des Moines, and police dispersed tear gas into crowds.

A curfew was imposed in Polk County Sunday evening to attempt to curb violence, and will continue indefinitely. Demonstrations at the Merle Hay Mall turned violent, and a Des Moines Register reporter was arrested at the event.

Curfews have also been imposed in Sioux City and Scott County in response to protests. In Davenport, two people were killed, and two others, including a police officer were seriously injured in a shooting connected to rioting.

The city of Coralville set a curfew Monday in response to looting at a Walmart in Coralville Sunday evening.

Reynolds said she thought curfews were effective in calming protests in Des Moines.

“I feel like it deescalated,” Reynolds said. “We’ve seen so many peaceful protests, it’s just when it starts to get dark and you’ve got your distractors that try to escalate and take advantage of a large group of people, it gets harder to control.”

In a call with governors today, President Trump said governors, “have to try and arrest people,” referring to violent protests. Reynolds said she was not on the call.

Des Moines mayor Frank Cownie also spoke at the conference, and was asked about the arrest of reporters in Des Moines.

Crownie said arresting reporters is not the intention of the Des Moines Police Department.

“I think when we’re in the throes of a riot, law enforcement looks at a situation and wants to keep everybody safe. As we want to move people away, sometimes it’s hard to seperate the press from others,” Cownie said.

State Representative Ako Abdul-Samad, D-Des Moines, who has been present at protests in Des Moines, thanked the peaceful protesters who have been come out around the state. Abdul-Samad said that the vast majority of protests were peaceful, and the violence was incited by less than 3 percent of those present.

“They hijacked the message that these young people had. Their motive was to cause disruption and destroy and disturb,” Abdul-Samad said.