An 8 p.m. to 6 a.m. curfew has been imposed in Coralville following protesting, looting, and looting attempts that took place Sunday night. 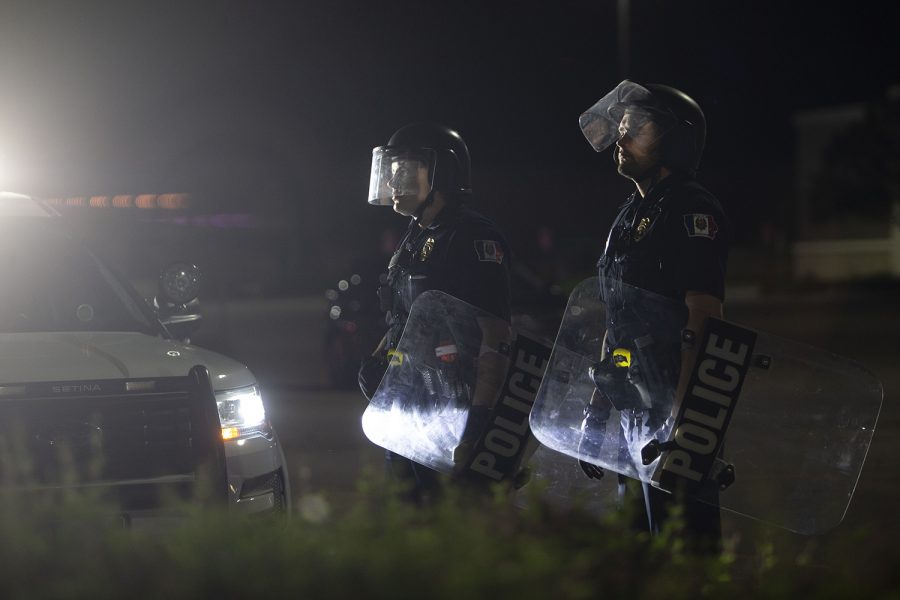 Officers stand with riot shields outside of the Coral Ridge Mall in Coralville on Monday, June 1, 2020. Social media posts circulated Twitter and Facebook encouraging looters to break into the mall at 10:30 p.m. Police blocked the entrances and the crowd became violent as a man rushed an officer and police used pepper spray and flash bangs on the crowd. Several nearby businesses had property damage to windows and some protesters were handcuffed.

An 8 p.m. to 6 a.m. curfew has been imposed for the city of Coralville after city officials stated in a Monday release that looting and looting attempts occurred at several Coralville businesses Sunday night.

The curfew in Coralville prohibits people from walking and standing outside, driving, and parking during curfew hours, unless they are traveling to or from work and home, according to the release. Coralville Transit’s night route will not stop at the Coral Ridge Mall after 9 p.m., but the rest of the route will not be affected.

Coralville Police used chemical irritant and flashbangs to disperse a group of a few dozen people around midnight on Sunday during a protest that occurred in the drive leading to the Coralville Mall. A Facebook post bearing the message “Coral Ridge mall hit loot,” had circled social media the morning before. On Sunday night, Milady Nails & Spa on the 25th Avenue strip had its windows broken, vandalism was reported at Tires Plus on 10th Street, and a dozen calls were received regarding the Coralville Walmart at 2801 Commerce Dr. throughout the afternoon and evening Sunday, though no arrests were made.

Curfews have also been imposed in Des Moines, Polk County, Scott County, and Sioux City in response to protests and violence.

Coralville Mayor John Lundell stated in the release that the city stands with peaceful protesters and demonstrators, but will not tolerate damages to the community caused by vandalism and violence during protests.

“We at the City of Coralville recognize and support the rights of citizens to demonstrate and protest, and stand with those peacefully doing so in sadness and anger over the death of George Floyd,” Lundell said in the release. “We also recognize that vandalism and violence are damaging to our community, as they are to other cities across the country.”

At a Monday press conference, Gov. Kim Reynolds condemned violent actions linked to protests in Iowa, stating that the National Guard is prepared to step in if demonstrations in honor of George Floyd continue to turn violent.