Rally organizers have condemned the throwing of water bottles and bricks at the police, announcing that the peaceful rally was not affiliated with the protests that occurred after they asked attendees to leave the area peacefully. 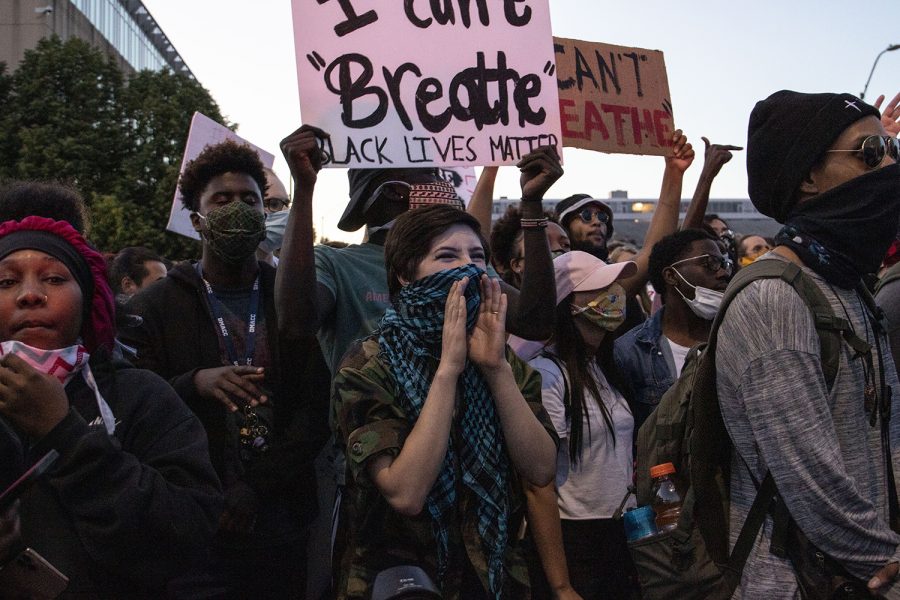 Chloe Bender (center) shouts at police stand in front of the police during a protest outside of the Des Moines police station on Friday, May 29, 2020. An organized peaceful rally in honor of George Floyd and other victims of police brutality turned to violence following the event. Protesters threw water bottles at police while police sprayed tear gas and flares were thrown. Bender was later tear gassed by police.

Face-to-face with a line of Des Moines police officers in riot gear, a group of protesters chanted, threw water bottles at police officers, and engaged in property damage within a timeline of almost three hours following the end of a peaceful protest in honor of George Floyd that took place from 6 p.m. to 7 p.m. in front of the Des Moines Police Department on 25 E. 1st St. on Friday.

Pepper spray was used by police officers after a police vehicle was surrounded, jumped on, and kicked by protesters. At least one individual was handcuffed during the protests.

A medical station was set up before officers announced they would use tear gas to disperse the protesters.

The violent protests began shortly after leaders of the Rally for George Floyd had asked for all attendees to disperse peacefully. A group of protesters continued to chant and wave signs on the steps of the Des Moines police station after the time the rally was allotted had finished. Less than an hour later the group approached police officers stationed along E. 2nd St.

Lead organizer of the Rally for George Floyd Michael Turner announced in a post-rally statement that the leaders of the peaceful rally were not affiliated with the events that occurred after the rally and opposed the violent actions of the protesters, which included a smashed police vehicle window.

“While we sympathize with the feeling of anger amongst many Americans, we are deeply saddened and disappointed that a small group of protesters have stayed on site and begun to damage property and antagonize our police force who gracefully supported our cause without disturbance,” Turner said in a statement issued shortly before protesters officially dispersed.

The peaceful rally was named in honor of George Floyd, a 46-year old black man who died Monday in Minneapolis after a police officer pinned him to the ground beneath his knee as Floyd said repeatedly that he could not breathe. The officer, Derek Chauvin, was charged on Friday with third-degree murder and manslaughter.

Turner said the purpose of the rally was to honor Floyd and stand in solidarity with all black Americans and POC who have faced systematic oppression in America. Speakers, including volunteers from the audience and Democratic Senate hopeful Kimberly Graham, spoke to a crowd of attendees with bandanas, homemade masks, and signs.

Turner had emphasized that the rally would be peaceful in the Facebook post that had been used to organize the event, stating that drugs and weapons would not be allowed, and that attendees were not to stay around the site after the rally officially ended at 7 p.m., an hour after it began. Turner also encouraged groups to maintain a safe distance from one another and bring their own masks and personal protective equipment at the rally.

Des Moines Police Officers had maintained open communication with rally organizers regarding the rally during its organization, according to Turner and public information officer Paul Parizek.

“The majority of the discussion was coming up with a plan to safely accommodate the protesters,” Paraizek had said in an email to The Daily Iowan the morning before the rally.

The Des Moines Police Department did not respond to request for comment on events that occurred after the rally.

A smaller group of protesters dispersed around 10 p.m., encouraged by state Rep. Ako Abdul-Samad, D-Des Moines, who stood at the front line of the protest during the face-off with police officers and encouraged protesters to disperse peacefully after the rally had ended.

Another rally in Des Moines is planned for 1 p.m. Saturday. A rally in Iowa City will be held at noon on the Pentacrest on Saturday.

7:10 p.m. – Some attendees stay, continuing chants started at the rally and introducing new ones as many gather on the steps of Des Moines Police Department. A protest begins as attendees introduce new chants directed at police officers.

7:20 p.m. – Lead organizer Michael Turner follows up with the DI post-rally, addressing his concern for the people who had stayed behind to protest. “You just don’t want things to get bad after such a good event,” he said.

7:50 p.m. – Protesters leave the steps in front of the Des Moines Police Department and approach the police officers on 2nd Street that had been stationed behind the police station during and after the rally ended. Minutes later, a small group begins to jump on, shake, and kick a police vehicle. An officer within the vehicle uses pepper spray on the group.

8:00 p.m. – Protesters begin breaking off pieces of brick lining the sidewalk and throwing water bottles in the direction of a line of police officers that had appeared wearing riot gear. Officers in riot gear and holding tear gas begin to push the protesters back.

9:00 p.m. – Around 9 p.m. Des Moines police officers announce that they will use tear gas on the protesters. A medical station had been set up on E. 2nd Street.

9:20 p.m. – Police officers ask protesters to disperse, and continue until around 10 p.m. when a small group of protesters is encouraged by Iowa Rep. Ako Abdul-Samad, D-Des Moines, to disperse and return tomorrow. The last chant used by the protesters is, “We will be back.”

10:00 p.m. – Rally organizers issue a statement addressing the post-rally protests. “We in no way are affiliated with these events and strongly oppose them,” it stated.