A rally at the Pentacrest was held to protest police violence and honor George Floyd. Several local black elected officials spoke at the rally to highlight racial inequities in Iowa City. 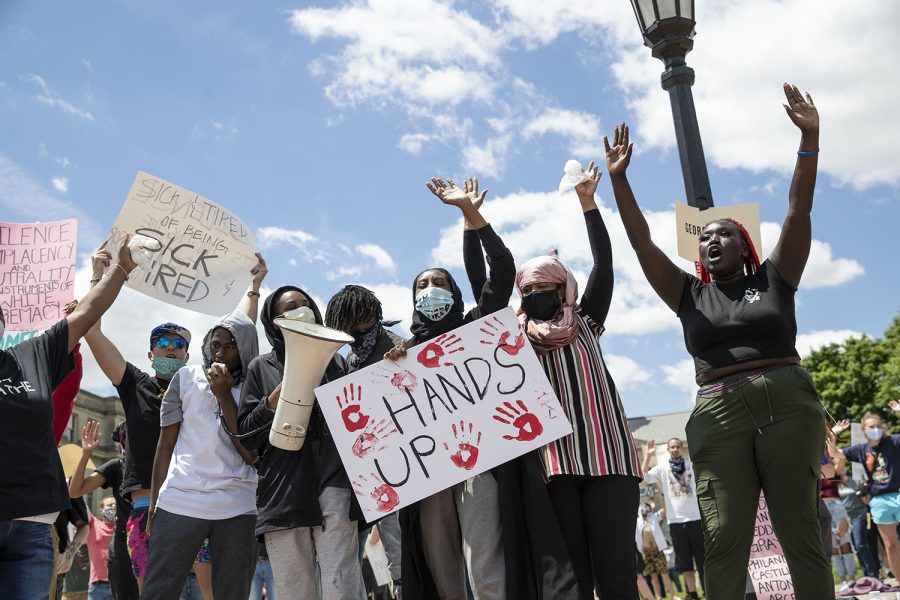 Protesters raise their hands and chant “Don’t shoot” during the Say Their Names rally on the Pentacrest on Saturday, May 30, 2020. Iowa City community members gathered to remember George Floyd, Ahmed Arbury, Yassin Mohamed and others. Money was collected during the event which went in donation to a vehicle procession carrying protesters going to Minneapolis. There were about five vehicles leaving directly following the rally.

Hundreds of people gathered on the Pentacrest Saturday to rally against police brutality and in honor of George Floyd as days of protests, some violent, have taken place across the United States.

Local leaders and protest organizers took turns speaking before the crowd, donned in masks and face shields to help mitigate the spread of the novel coronavirus.

The rally was organized by sisters Lujayn Hamad, 18, and Raneem Hamad, 20. Lujayn Hamad said they wanted to create a safe space for people to express their grievances with police violence and create a dialogue.

Protests have been erupting across the country in response to the death of George Floyd, a black man who died after a white police officer, Derek Chauvin, pressed his knee into Floyd’s neck for at least eight minutes. Video of the incident shows Floyd pleading with the officer and repeating, “I can’t breathe.” Chauvin was arrested and charged with third-degree murder and manslaughter Friday.

Teague said that Iowa City still faces challenges with racial disparity and the police department, but he applauded the city for electing people of color, such as himself, to positions of power.

“The work is not done, it’s far from being done,” he said. “But we should be proud that we have leadership that look like the community.”

Royceann Porter, the first black woman elected as a Johnson County supervisor, spoke about the need to remedy racial inequities in policing, housing, and education. She said the black community in Iowa City is listened to and working to address these issues, but problems still remain.

Porter also addressed the calls to curb the violent protests in Minneapolis and elsewhere. A speaker with Veterans for Peace earlier in the rally was booed by the audience after saying people should not respond to police violence with more violence.

The Pentacrest rally followed a night of protesting that turned violent in Des Moines, where some protesters threw bricks and water bottles at police and police used tear gas on protesters.

Lujayn Hamad said the organizers contacted Iowa City police and told them they didn’t want officers near the protest in order to avoid a confrontation.

City staff placed roadblocks closing off sections of Clinton Street and Iowa Avenue, and the protest remained peaceful throughout.

“We wanted to make a safe space, because people are angry,” Hamad said. “And when anger is boiled up with nonchalantness, frustration will start to happen and people will start to react. And we can’t go around blaming fingers and putting blame on anyone, we just got to take the right precautions from the first place. No police.”

Meghan Malachi, 25, an Iowa City resident and University of Iowa alum who attended the protest, said seeing Iowa City leaders supporting the demonstration was encouraging. She said she thought Teague’s comments stood out and he didn’t shy away from his support for the protesters.

“A lot of cities that are protesting don’t have the support of their leaders, so it’s nice to know that we have some of that here in Iowa City,” she said.