Smith-Marsette: Iowa’s offense has ‘everything we need’

Weapons are all over the field for new starting quarterback Spencer Petras. 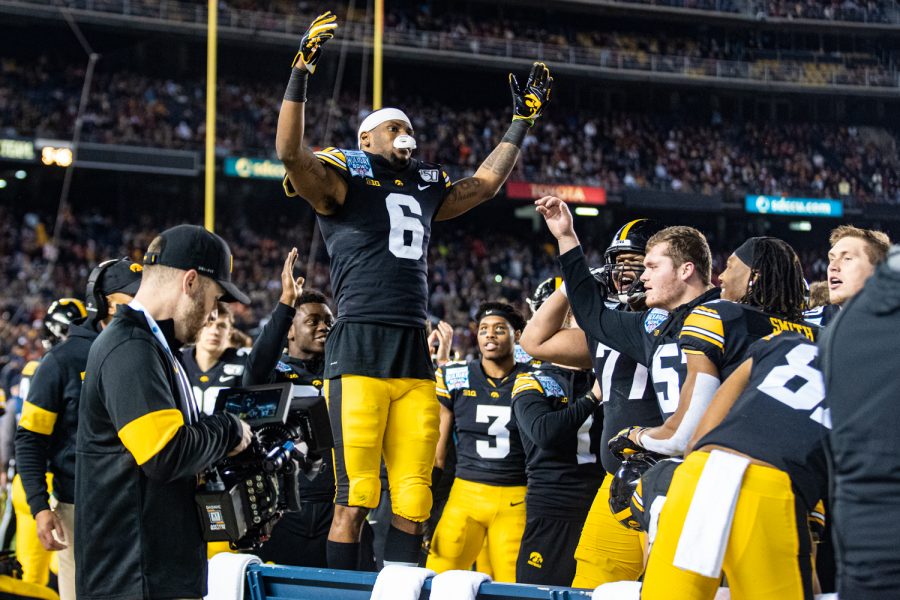 After spending three seasons catching passes from Nate Stanley, Ihmir Smith-Marsette is getting used to having Spencer Petras at quarterback. Along with an occasional deep ball, the senior Hawkeye wide receiver is looking for something else from the new starting signal caller.

“Hopefully this year we become locker buddies,” said Smith-Marsette, who wears No. 6. “He wears the No. 7, so they can move him by me.”

With the loss of spring practices due to the COVID-19 pandemic, Petras hasn’t had a typical offseason to prepare to take over the starting job. Smith-Marsette said that almost every other day, Petras and other offensive players go to a football field or a park to workout.

Adjusting to a new quarterback isn’t always easy, but Smith-Marsette and Petras are developing a chemistry with one another.

“Nate has more of a power arm,” Smith-Marsette said. “So the ball comes a little bit faster with a little bit more velocity. It hits you a little bit harder. Spencer is more of a touch person. He’s got a little less speed on it. That’s mainly the difference between those two. Other than that, both very accurate. Can move around the pocket.”

Smith-Marsette finished his junior season with a three-touchdown performance against USC in the Holiday Bowl. Heading into his senior year, the Newark, New Jersey, native provides Petras with an offensive playmaker who is capable of scoring any time he gets his hands on the ball. And he’s not the only weapon on offense the Hawkeyes will boast out wide next season.

Iowa’s corps of wide receivers is maybe as deep as it has ever been under head coach Kirk Ferentz. Brandon Smith was having a career-year before an injury forced him to miss a final chunk of last season. Nico Ragaini and Tyrone Tracy also proved to be critical components of the Hawkeye passing attack as freshmen a year ago.

A productive year by a position group could lead to complacency. But that’s not the case in Iowa City.

“Nobody is a guaranteed first-round pick, second-round pick, third-round pick,” Smith-Marsette said. “Nobody is guaranteed anything. You still have to work like you’re coming in, like you still need a spot. That’s the attitude we all have. We’re all fighting for a spot. Complacency, I know that’s a big thing when people get their name out there. But we’ve still got a lot to prove. There’s nothing that anyone should be complacent for. It should be easy to continue to stay hungry, and want to fight to do better and be better.”

Smith-Marsette said he is using this offseason to work on gaining separation at the line of scrimmage and getting in and out of the top of his routes. This, he said, will allow him to become an even bigger threat on offense.

“If anybody ever says they don’t need to work on anything, they’re lying, unless they’re Jerry Rice, Randy Moss, or somebody like that,” Smith-Marsette said.

With all of Iowa’s talent out wide, along with a dynamic backfield led by Tyler Goodson and Mekhi Sargent, a breakout candidate in tight end Sam LaPorta, an experienced offensive line, and a big-armed starting quarterback —  the Iowa offense has the potential to put up a lot of points in 2020.

“I’ve definitely thought about how explosive the offense can be,” Smith-Marsette said. “Just look at all the guys we have… We’ve got everything we need.”