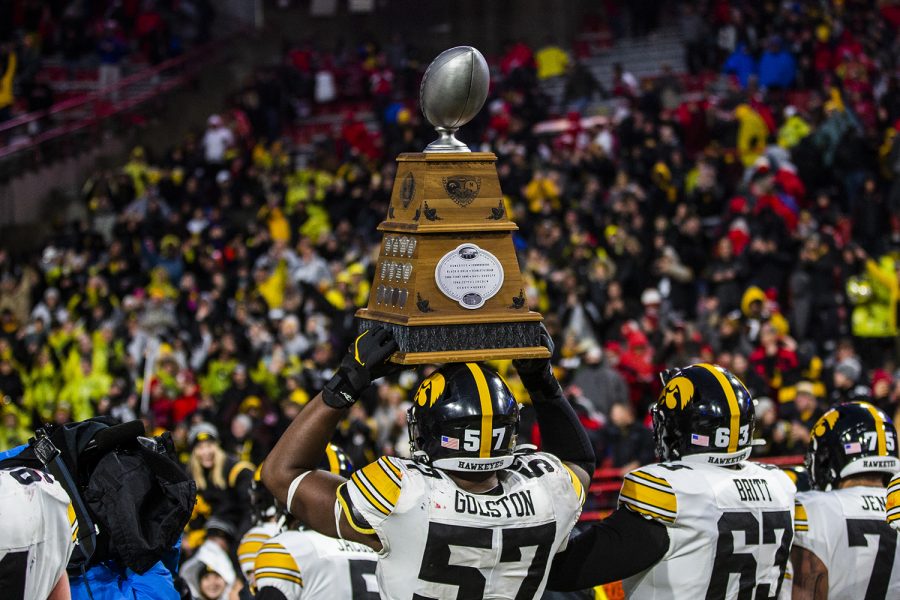 Ever since he joined the Iowa defensive line unit, Chauncey Golston has been groomed to be a top pass rusher for the Hawkeyes. Going into his senior season, Golston is ready to be a leader up front.

“When you get here, it’s all about growing up and leaders creating other leaders,” Golston said. “The guys that came before me, that’s all they were trying to do. Way back when I first got here it was Jaleel [Johnson]. Then down the line to guys like Parker Hesse and Anthony Nelson. And then me taking a bigger role last year with Austin Schulte and A.J. Epenesa… I feel like I’m ready for the added load.”

Golston, a Detroit, Michigan, native, was a rotational player as a sophomore before becoming a starter for the Hawkeyes last season. After the departure of A.J. Epenesa, the only player in program history to record consecutive 10-sack seasons, Golston will be Iowa’s top pass rusher in 2020.

Like those that came before him, Golston knows the little things can be the difference between being a good player and an All-Big Ten performer.

“I remember it was my sophomore year, we were at a defensive meeting and coach [Phil] Parker was showing us Matt Hankins or something,” Golston said. “And then you just see a dude running at full speed past the linebackers and it was Parker Hesse. [Parker] didn’t have to talk about it. You saw it.

“It’s an accountability thing. The linebackers never have to worry about if you’re going to be there. It’s those little things that are kind of hard to talk about, but they’ve been instilled in you.”

That accountability also matters off the field.

Golston said he changed his diet this year. Being away from the facility and without the meals that are provided by the team, Golston has been tested.

“Especially going into this pandemic, I was like, ‘I don’t know if I’m going to be able to do this because sometimes I don’t want to cook. I just want to order a nice pepperoni pizza,’” Golston said. “It’s just been stuff like that.Times like this, they try you. But you’ll come out alright if you just attack things as hard as you can.”

Along with Epenesa, the Hawkeyes will be without Cedrick Lattimore and Brady Reiff next season. Both were starters on the interior of the defensive line a year ago.

Iowa has addressed those losses by adding graduate transfer Jack Heflin from Northern Illinois. Heflin, listed at 6-foot-4, 319 pounds, was named second team All-MAC last season as a redshirt junior and was the Huskies’ defensive player of the year.

With the loss of spring practices due to the COVID-19 pandemic and the addition of Heflin, the defensive line rotation still needs to be sorted out before the season starts. No matter his role, Schulte is just focused on being prepared for when he can get on the field again.

“Obviously that’s a hope for everyone to be a starter,” Schulte said. “I really just want to contribute to the team as much as I can. If that’s a starting role, then so be it. I just need to be ready to play my best football when the time comes.”