The program allows for young writers to hone their spoken word and poetry skills. During the COVID-19 pandemic, the group is trying to maintain some stability through an online format. 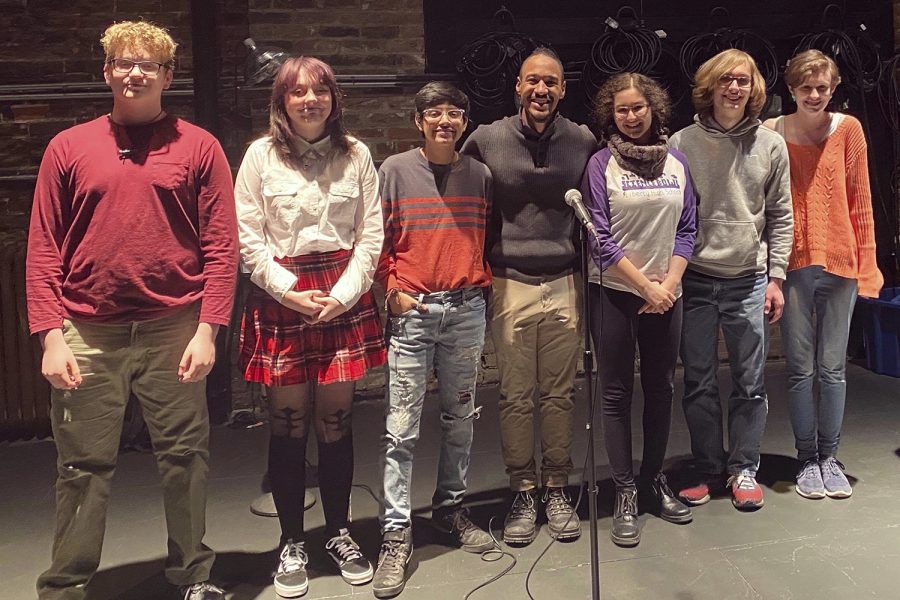 When IC Speaks founder Caleb Rainey was a high school student in Missouri, he lacked a comfortable space to be creative through poetry. His experience inspired him to create a group for high school-aged poets to further develop their voice.

Rainey founded the spoken word poetry group, in 2019, two years after graduating from the University of Iowa with a degree in English and creative writing. To start the group, he partnered with the Iowa Youth Writing Project and The Englert Theater, who helped to put on the in-person events.

In a typical week, Rainey holds one-hour-long writing workshops for the group members at Iowa City West High School, City High School, Liberty High School, and Tate High School. Once a month, students from each of the high schools would meet together at The Englert Theater for a performance workshop, which would give all of the students from different schools a chance to be together, and work together, Rainey said.

“I wanted to create a safe space to be a writer,” he said. “I’m constantly asking what they need from me, and what it means to make a safe space where people are comfortable.”

Spoken word poetry is a powerful and vulnerable form of art for Rainey, who said the local spoken word community is fairly small. COVID-19 has also forced performances, poetry slams, and open mics to convert to virtual workshops, Instagram lives, and videos of performances online and on social media.

Because their spring showcase at Englert was canceled, Rainey came up with the idea to hold an online competition for the group in April, where 10 IC Speaks members volunteered to compete through videos they submitted of themselves performing spoken word pieces they wrote. The spoken-word poetry tournament, named “Post March Madness,” took place on the IC Speaks Instagram page, @ic_speaks.

“The showcase being canceled kind of sucked, so I was trying to get the students out there to get them one, kind of competitive but also getting them to share their work,” Rainey said.

Nancy Nahra, a freshman at Liberty High School, won the Post March Madness tournament. She said that competition had held her accountable for writing even during such an unprecedented time. Nahra said that despite the win, she had been nervous to perform her three poems during each of the eight rounds.

“Winning means a lot to me because I’ve had a lot of people support me,” Nahra said. “I’ve had Caleb and some of my other friends help review my poems. I feel like after all the stress I got confident. I felt happy [winning], knowing that people were really listening to my poetry.”

Liberty High freshman Adi Honaker was the tournament runner-up and has known Rainey since seventh grade when she attended an Iowa Youth Writers Project event in 2018. After participating in the event, Rainey invited her to join IC Speaks.

“[IC Speaks] is a really important outlet for me because even though I write on my own, it gives me an opportunity to share,” Honaker said. “It opens a lot of new windows for me to be able to have people listen to my writing, which helps me write more.”

While the group was created for the students, Rainey said IC Speaks has also changed his approach to writing and supporting young artists.

“As a writer, it’s impacted me because it’s actually forced me to write more,” he said. “I write four days a week, which is not what most writers say. We’re emotional beings, we [write when we] feel inspired, and when we don’t, we don’t. I never ask a student to do something I wouldn’t do. So any time I provide a prompt, I also write it. That’s part of the community feeling — that we’re all in this.”

The program has allowed Rainey to explore poetry and the human experience more deeply. He said that he knows his students will go on to reinvent the new standards of poetry writing and spoken performance, which inspires him to help cultivate their skills.

“I’ve never taught in a high school before,” Rainey said. “Being with a bunch of high schoolers is interesting because it requires you to really ask questions like what it means to be a good person, to grow up. I’m constantly asking myself what I needed to hear when I was in high school.”