The Daily Iowan • May 12, 2020 • https://dailyiowan.com/2020/05/12/university-of-iowa-international-students-navigate-post-graduation-realities-amid-the-covid-19-pandemic/

For international students at the University of Iowa, typical post-graduation challenges have been exacerbated by the COVID-19 pandemic. These disruptions have caused many to question the likelihood they will continue to remain in the U.S. 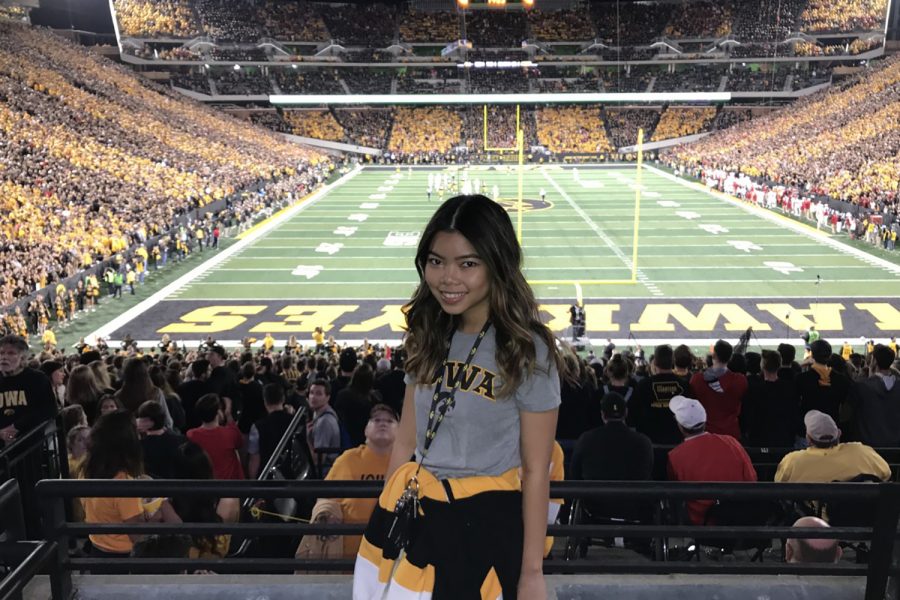 The University of Iowa senior’s parents were planning on traveling to Iowa City this spring from their home in Jakarta, Indonesia to watch their daughter graduate from college, and experience what it means to be a Hawkeye for the first time.

Because of the global outbreak of COVID-19, international travel bans, and a university move to host commencement ceremonies online, Kusnadi’s parents canceled their plans and her plans for the future have become uncertain.

International students traditionally have various options for post-graduation pursuits. Amid the spread of the novel coronavirus, however, many are facing tight documentation deadlines and requirements with added uncertainty about whether they’d be able to return home during international travel restrictions.

Like many other graduating international students, Kusnadi recently received her Optional Practical Training work authorization, which permits international students here on an F-1 status temporary employment in an area of their major field of study for up to 12 months, according to U.S. Citizenship and Immigration Services.

Most international students at the UI are here on F-1 visas, said Michael Bortscheller, UI associate director of International Student and Scholar Services, in an email to The Daily Iowan.

Despite executive orders from the federal government that target certain types of non-citizen and permanent employment, Bortscheller noted that people who come to the U.S. for temporary purposes such as studying are still eligible for work authorization, if they meet all other qualifications.

For international students graduating from higher-education institutions, however, the clock is ticking, and work authorization doesn’t guarantee employment.

“If, due to current circumstances, a student cannot find a job within 90 days of the start of their authorization, then they would have to depart the United States,” Bortscheller said. “The government has not announced any exceptions from these normal application deadlines and grace periods.”

Due to the narrow timeline and an uncertain job market because of COVID-19 mitigation measures and economic closures, Kusnadi said she and many other international students have been scrambling to find employment so they can take advantage of the Optional Practical Training program.

“There’s this whole argument that OPT is a staple for international students and university students,” Kusnadi said. “That’s what attracts them here in the first place.”

Kusnadi, an international-relations major with a minor in business administration, said she has yet to find a job, but has participated in several informational interviews with professionals in her field and UI alumni to scope out potential job opportunities. Kusnadi added that she’s taken advantage of UI resources like the Pomerantz Career Center to guide her in the process.

“You really don’t have the luxury of time and it’s pretty stressful, especially with graduation and finals week, you really have to start early,” Kusnadi said.

Because of anti-immigrant rhetoric from politicians in addition to the stress of the pandemic, Kusnadi said, it’s especially hard to get jobs right now.

Had she known sooner post-graduation employment opportunities would be this sparse, Kusnadi said she would have considered applying for graduate school — another means for international students to stay in the U.S. — but it was too late by the time COVID-19 ramped up nationwide.

Kusnadi said she’s still applying for jobs, however she is also looking into different volunteer or unpaid intern work. Her main priority is to broaden her network and get experience in the U.S., Kusnadi said, even if it means sacrificing an income.

“For international students, your life can turn 180 degrees within months or weeks,” she said. “So, I could be back home in Indonesia like next month or I could stay in the United States for the long [term].”

Since the Trump administration began, Kusnadi said she is less hopeful about opportunities for international students than when she arrived in the U.S. four years ago.

UI graduating senior and international student Allison Kim echoed Kusnadi’s uncertainty about the future, and whether or not she will remain in the U.S.

“They said that we’ll be able to participate in the 2020 fall or the 2021 commencement ceremony, but I have no idea where I’ll be at that time,” Kim said.

Kim spent her middle and high school years in South Korea, where many of her friends and family live. But she was born and spent 10 years of her childhood in Minnesota, allowing her to attend the UI as a dual citizen.

“So, with the citizenship I’m technically a domestic student,” Kim said. “But experience-wise, I’m an international student.”

While she is not facing the same 90-day time constraint as Kusnadi, Kim said she is rethinking her decision to remain in the U.S. because of the depressed job market and racial disparities.

Kim said she is slated to complete a data-analytics internship in California after graduation, although it has switched to a virtual format for its first two months.

Kim’s planned to seek long-term employment and settle in the U.S. after her internship, she said, but she has only heard back from a couple of the nearly 50 positions she’s applied for.

The failing job market led Kim to apply and earn admission to graduate school in South Korea, she said, which was originally her backup plan.

Increased discrimination toward Asian Americans since the outbreak of COVID-19, which she has seen in headlines nationwide, also played a role in this decision, Kim said.

“I’ve always known about that side [of the U.S.], but it was always just like in the back of my head since I’d never really seen it out front,” Kim said. “But with this, it has changed some thoughts of mine about the states.”

Bortscheller said if international students do not seek work authorization, they have a 60-day grace period before falling out of status. To fall out of status is different than being undocumented, he said, because students entered the U.S. with appropriate documentation.

If students do not leave the country within the allotted 60 days or those who received work authorization do not find employment within 90 days, they are advised to depart from the U.S. as soon as possible, Bortscheller said.

Bortscheller said these grace periods should allow ample time for students to make arrangements to get home before falling out of status, and that many countries have been accommodating to international citizens wishing to depart from the U.S.

“[International Student and Scholar Services] does advise students on all of their options after graduation, and we have been contacted by many students who have understandable concerns given the circumstances,” Bortscheller said. “We are also monitoring the many updates that have been coming from the U.S. government, [and] have sent out mass emails if anything is announced which affects our students.”