Miming improved University of Iowa senior Olivia Sandvold’s connection to the STEM fields she studies. After exploring a winding path to STEM, she’s headed to the University of Pennsylvania. 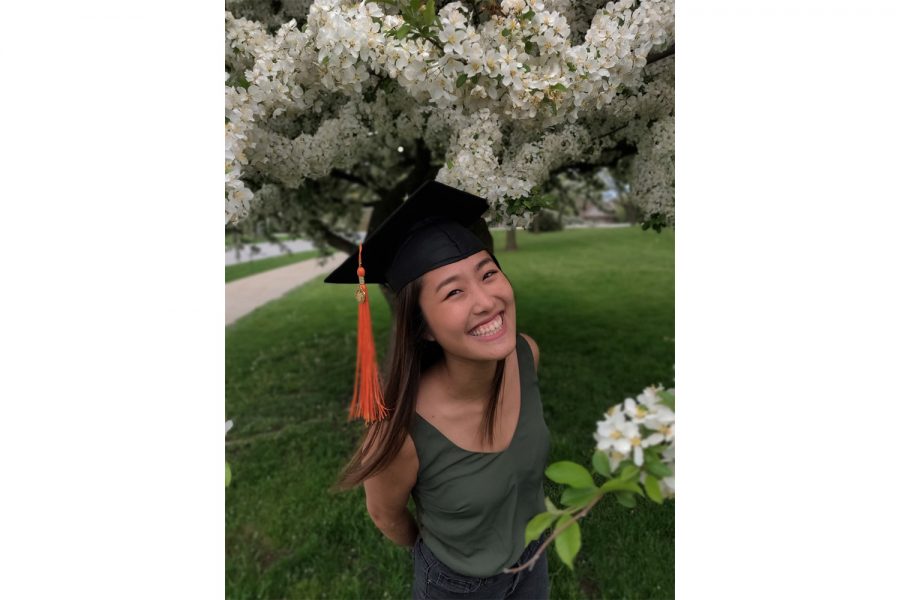 Now, as Sandvold graduates from the University of Iowa with highest distinction, a degree in biomedical engineering, and minors in mathematics and computer science, she recalls her time as a mime — and how that experience changed her life.

What began as a joke between Sandvold and her friends grew into a deep appreciation for creativity and communication that she said supported her as she entered engineering fields.

“I think miming and storytelling in general really connects with engineering and the problem-solving process,” Sandvold said. “And also, the communication of what you are trying to do, because I think that communication in engineering is vital — because you need to be able to say why you are doing something in order for people to be interested.”

While Sandvold did not return to the miming stratosphere in college, her performing experience serves as a reminder of the inherent self expression and creativity involved in engineering.

Sandvold is a major voice among the 2020 graduating class in STEM fields, and her involvement on campus over the past four years is extensive. An Honors Society member, Sandvold is also the co-founder of Hack Iowa, a student organization that promotes participation in Hackathons.

As a freshman, Sandvold volunteered at the Ronald McDonald House, participated in Dance Marathon, joined the Biomedical Engineering Student Society and the UI President’s Leadership Society, was a research assistant, and an Honors Summer Ambassador.

As she continued college, other key acclaims included working as a teaching assistant, studying abroad in Scotland her junior year, and involvement in the national engineering honor society, Tau Beta Pi, as a corresponding secretary, and various other internships and accolades.

“[Sandvold] has a lot of things going for her,” said Addison Woll, UI Honors Program assessment manager and admissions coordinator. “She’s very smart, she’s very driven, and she’s very kind and compassionate, but I think it’s her compassion and her desire to give back that is her greatest strength. It’s what motivates her. In my interactions with her, she always has a smile and she’s always willing to help. And that’s demonstrated through her engagement on campus.”

Sandvold began volunteering in the inpatient child and adolescent psychiatric unit at UI Hospitals and Clinics during her freshman year.

J.P. Claussen, a clinical educator in the unit, said Sandvold primarily assists children with homework and developing a therapeutic rapport with those who had gone through difficult times in their lives.

“She is someone who would jump in with both feet and really work to engage all kinds of kids,” Claussen said.

The work at the psychiatric center was rewarding and enjoyable, Sandvold said, and she loved helping the kids work through problems and feel accomplished.

“I really enjoyed that because I think that many students don’t necessarily get the individualized attention or just someone sitting and listening to the problems that they are having in class or reasons why they are not understanding the material,” Sandvold said.

For someone with such an extensive résumé, however, Sandvold said her biggest challenge on campus was narrowing down what she wanted to do for a career.

“I think honestly, my biggest challenge at Iowa was figuring out what I wanted to do in my future,” Sandvold said. “And I think that is something that a lot of people struggle with.”

Sandvold has always had a fascination with medical-device design and bio-imaging, but there are several paths she could take at the UI, so a large portion of her experiences was exploratory to help her gain a better understanding of what she wanted to do.

As a woman in a STEM field, Sandvold said she has faced incidents where she felt she was not being respected because of her gender or that it affected how professionals perceived her. She said she was passionate about working toward more female representation in STEM.

In 2015, more than half of bachelor’s degrees in biological and agricultural sciences were earned by women, but that share shrunk in physics, computer science and engineering bachelor’s degrees, according to the National Science Board.

“It is my hope that there are many more women leaders in STEM, because I think that having a face and having an icon to look up to that looks like you is incredibly important,” Sandvold said.

While Sandvold says her road to discovery was long and winding she feels now that she is on a good trajectory.

Sandvold will attend graduate school at the University of Pennsylvania in fall 2020 on a Ph.D. track in bioengineering in the interfaces program, which allows her to take a year and a half of medical-school classes while working on one of her key interests — bioimaging research.

Although the global outbreak of COVID-19 created a major interruption in Sandvold’s education and she is disappointed that she will not have an in-person commencement, she knows that she will always love the campus community and her time at the UI.

“With COVID-19, it doesn’t feel like things are tied up neatly with a bow,” Sandvold said. “But it does shed a lot of light on what the people around me have meant to me.”