Though I’m a writer by nature, I find myself grateful for the photos that illustrate a wonderful Daily Iowan-filled life as my time in the newsroom comes to a close. 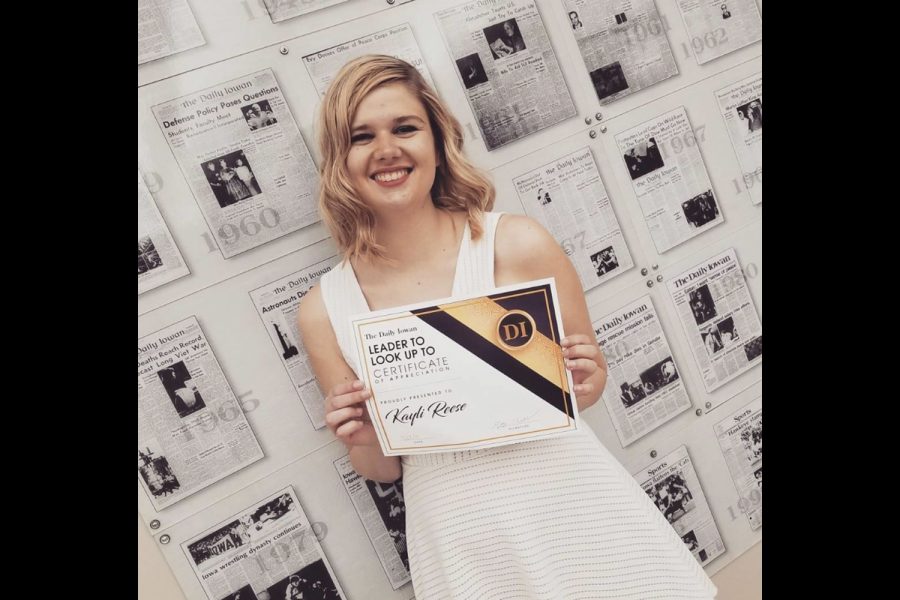 I’ve never really been a picture person, preferring not to miss memories as they happen in real time. However, as I struggled to try to find a way to sum up my experience at The Daily Iowan, I found myself turning to my camera roll.

I have an embarrassing amount of photos of my byline, including my first published piece of writing in the DI. It meant a lot to freshman-Kayli — a shy person who was about to come into her own — to have her voice shared with the world. It means a lot to me now as an imminent graduate looking back on how far I’ve come as a writer.

Pictures in the university police precinct are probably something unique to me at the DI. Through the crime and court beat, I fell in love with the feeling that comes from breaking news first (which usually comes right after the very stressful feeling of typing at superhuman speeds). Crime reporting became a niche that I couldn’t give up no matter what job title I had. I’m so grateful to the beat that gave me confidence in my abilities as a reporter that will not ever leave me, even after I leave the DI.

I’ve got lots of football game pictures, which led me to thinking of the sports boys who let me into their group this past year. Thank you to Robert Read, Austin Hanson, and Pete Ruden for answering all of my (probably dumb) questions about how sports even work and, more importantly, for all of the laughs. I would also like to specifically thank Robert for letting me bother him every single day to talk about movies.

I’ve got a picture I snuck of Shivansh Ahuja after I gave him a $5 thesaurus for Christmas. He’s looking at it like it’s the best thing in the world. I’m thankful for Panda Express runs and our secret language where we only have to look at each other to have a conversation.

I sometimes forget that Aadit Tambe hasn’t been at the DI as long as I have until I look at photos of my freshman year and wonder why he’s missing. He’s my sunshine personified (even when we’re bickering), and writing about him right now makes me wish I could run to Iowa City to give him the fiercest hug.

There’s a picture of Marissa Payne and I wearing what’s almost the exact same blue sundress, because we had molded together as coworkers and roommates. What I wish I had a picture of, though, is the long hug we had after winning the 2020 Newspaper of the Year award, crying into each other’s shoulders after making the journey from two quiet news reporters to lady leaders. I cannot wait to see all the things she’s about to do.

I orchestrated multiple group photos of the reporters on Brooklyn Draisey and my news staff last year. Working as their editor was one of the most rewarding parts of my life thus far. Not only did I find my own voice as a leader, but I had the privilege of watching them all grow as reporters and people. I speak for Brooklyn and myself when I say that the two of us cannot be more proud of them all, look forward to seeing all the great things they will do, and will avenge them if anyone ever dares wrong them (me with a magic wand, Brooklyn with a sword).

And speaking of Brooklyn — how do you sum up your experience meeting your other half in a paragraph? She’s the Mulder to my Scully, the Stiles to my Scott, and the Louise to my Thelma if I ever need one. She’s the best part of my day, every day. I thank whatever force exists out there in the universe we were put together as editors, not only because she’s my best friend but because we take really cute photos together, as the true best DI bromance duo should.

I remember peeking into the DI newsroom at my college orientation with my mom, not yet knowing that I would spend what feels like a majority of my college career inside. I didn’t know then that I would work really hard with the best group of people every day to make an absolutely amazing paper. Sometimes I can’t believe it all happened and that I was part of it.

But I have the pictures to prove it.