In their four years at Iowa, these two women’s basketball players accomplished a lot on and off the court. 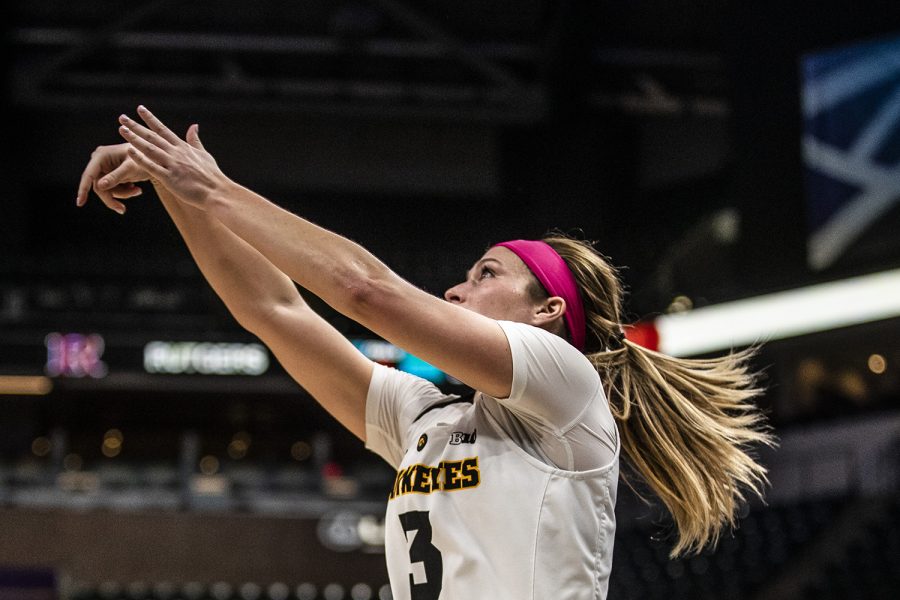 Iowa guard Mackenzie Meyer shoots the ball during the women's Big Ten tournament basketball game vs. Rutgers at Bankers Life Fieldhouse on Saturday, March 9, 2019. The Hawkeyes defeated the Scarlet Knights 72-67 and will be moving on to the championship game against Maryland.

For Iowa women’s basketball seniors Kathleen Doyle and Makenzie Meyer, it wasn’t supposed to end like this. After finishing third in the Big Ten, the Hawkeyes were going to the NCAA Tournament and were set to probably host the first two rounds.

The COVID-19 pandemic erased those plans. But it didn’t erase the experience the seniors on that team got over their years as a Hawkeye.

Last month, The Daily Iowan caught up with two of the seniors on the team who reflected on their experience in the Black and Gold.

“It’s been amazing,” Meyer said. “The best four years of my life. I couldn’t have asked for a better place to play, and I’m just really thankful that I had the opportunity to play at Iowa. It’s always been my dream school so I couldn’t have imagined any better.”

Meyer played an integral role in all of her seasons at Iowa. She steadily increased her point total every season, going from scoring 232 points her freshman season to 430 points her senior season. In terms of assists, she averaged four or more per game in each of her last three seasons.

But that’s not all that she accomplished at Iowa.

Doyle’s accomplishments are well documented. She averaged 18.1 points, 6.3 assists, and 4.6 rebounds per game last season and won the 2020 Big Ten Player of the Year award.

Like Meyer and the other returning players on the team last season, Doyle felt like the team had something to prove after losing many key players from the season before.

“I don’t think people thought much of us going into the year,” Doyle said. “But that sort of was a motivating factor for us that we’re just going to work as hard as we could every day in practice. We had total faith in each other, and I think the chemistry we had as a team and the belief we had in each other as teammates went a long way.”

On April 17, Doyle was drafted in the second round to the Indiana Fever of the WNBA and will try to make their roster when the season begins. Meyer will be taking undergraduate classes in the fall at Iowa before finding out if she got into dental school in December.

After losing another key senior class, the Hawkeyes will look a bit different next season. Doyle and Meyer said they hope that next season’s team continues the Iowa tradition.

“I hope we’ve taught the underclassmen a lot,” Meyer said. “I think both Kathleen and Amanda [Ollinger, another Hawkeye senior] have left such a great legacy on the court and in the classroom. Just being good examples of succeeding in both aspects and just what it really means to work hard.”