With 13 seniors gone from last year's team, there will be many new faces in the 2020 starting lineup. 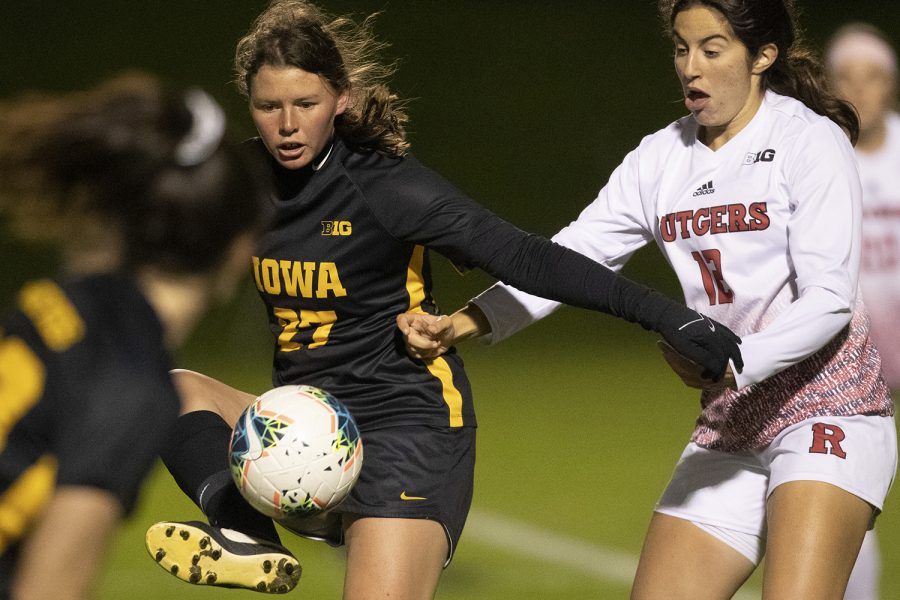 Jenna Galligan for The Daily Iow

Last fall was an exciting time at the Iowa Soccer Complex. The Iowa soccer team went 15-5-1 and earned a berth in the NCAA Tournament for only the second time in program history.

The team’s 13 seniors were a key reason for the Hawkeyes’ success. Forward Devin Burns and midfielder/defender Natalie Winters led the Hawkeyes with six goals each. Emma Tokuyama, a forward, tied for the team lead in assists with five.

Captains Isabella Blackman, a midfielder, and Hannah Drkulec, a defender, showed great leadership that everyone on the team benefited from. Goalkeeper Claire Graves was steady and gave up less than a goal per game.

With all these seniors gone, the Hawkeyes will have many replacements in the lineup but should be suited for another strong season.

Heading into her second season as a Hawkeye, the New Zealand native will look to follow up on her success from last season. Tawharu had five goals and five assists and was named the team’s newcomer of the year.

Having three game-winning goals last season and with Burns graduated, look for Tawharu to lead the group of forwards.

Gourley started last season strong and never looked back. She had five goals and three assists, and she was named to the Big Ten All-Freshman Team at the end of the season, which a Hawkeye had not made since 2016.

With signs of being a prolific striker, Gourley should continue her success and be a regular in the starting lineup.

The last forward spot in the starting lineup could have rotation depending on the matchup, but Cape looks to be the player that gets the most starts here. She started the first 10 games of last season and scored the first goal in the epic Cy-Hawk game.

Junior Skylar Alward could also start some games here. She had two goals and one assist last season in 19 games. If neither is a fit, a potential started is sophomore Daisy Light, who played 34 minutes last season.

The Solon, Iowa, native is ready for a permanent starting role after playing in all 21 games and starting seven of them last season. She scored one goal and had one assist but played a key role in helping the Hawkeyes’ defense be as strong as it was.

She was third on the team with shots at 31.

Like Durr, Rydberg should be ready for a permanent starting role after starting 11 games last season. She had one goal and one assist with 24 shots.

This speedy player is prepared to be an offensive midfielder in the starting lineup, and she can also fit in as a forward. Though she didn’t score a goal, the sophomore had 19 shots and three assists last season.

Defense is what makes Iowa soccer, and Cary is a big reason for that. Last season, she started all 21 games and played 1,667 minutes, which was sixth most on the team.

Cary had one goal and three assists and should continue making the defense strong once again.

Last season, Wheaton had two impressive goals against Northern Colorado and Illinois. She had also had one assist.

Wheaton is known for her defense and played the third most minutes on the team. Having two years of solid experience behind her belt, Wheaton can also make the defense even more threatening.

Arguably the best defender and returning player on the 2020 squad, Whitaker played the most minutes on the team last season and was a tough defender for opponents. She had one goals and three assists with 14 shots.

Replacing Drkulec, the sister of Devin Burns should fill the final starting spot on most occasions. She started one game last year and logged 430 minutes.

Though Riley Burns didn’t have a goal or assist last season, she managed to get three shots on goal.

With Graves leading the position for four seasons, Wilhelm has big shoes to fill. But she should be ready after learning from Graves and being with the team for two seasons. Wilhelm played 99 minutes and gave up one goal last season.