The Daily Iowan • May 5, 2020 • https://dailyiowan.com/2020/05/05/seperate-hearing-date-set-to-discuss-a-new-trial-on-sexual-abuse-charges-for-former-iowa-hillel-director/

The defense's request for a new trial for David Weltman was previously set to be heard at the same time as Weltman's sentencing hearing. 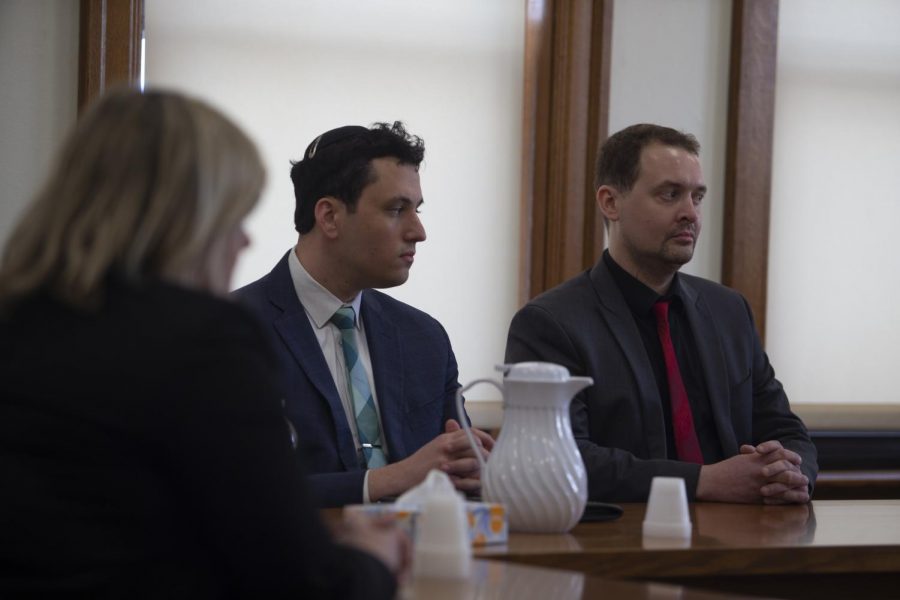 Former Hillel director David Weltman and his attorney Christopher Foster listen to the state’s closing argument during the third and final day of trial on Thursday, 5, 2020, at the Johnson County Courthouse. Weltman was convicted of second-degree sexual abuse, a Class B felony. (Emily Wangen/The Daily Iowan)

A separate date to discuss a new trial for David Weltman — the former Iowa Hillel director who was convicted of sexually abusing a minor during Hebrew lessons in 2019 — has been set.

The hearing will take place by telephone in front of Sixth District Judge Chad Kepros at 1:30 p.m. May 15. The new trial hearing was previously slated to be held in conjunction with Weltman’s sentencing hearing on June 12.

Weltman’s attorney Christopher Foster filed a request May 1 asking for the new trial hearing to be held before Weltman’s sentencing, as the court ruled that the defense could ask to have post-trial motions discussed over the phone as long as Weltman waived his right to be present during the hearing.

Foster requested a new trial after arguing that Weltman did not receive a fair and impartial trial. Weltman was found guilty of second-degree sexual abuse by a jury March 5.

Foster said in court documents that testimony regarding Weltman’s trip to Israel with the victim’s family should not have been including as evidence in the trial. The evidence  involved “improper character evidence, specifically evidence of prior acts, that should have been excluded,” read April 17 documents.

The defense also argued that the state “engaged in prejudicial misconduct” during the trial and that the evidence was not sufficient for a guilty verdict.