Local businesses and restaurants in the city of West Branch opted to stay closed after Iowa Gov. Kim Reynolds reopened 77 counties in the state, including Cedar County. 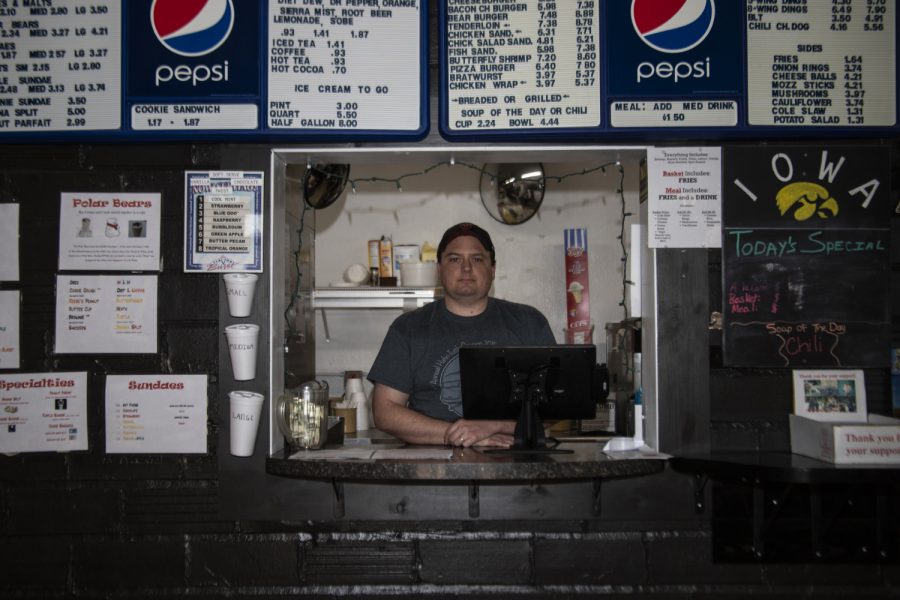 Steven Grace poses for a portrait at Main Street Sweets in West Branch on Friday, May 1, 2020. Grace, co-owner of the restaurant, said as a business owner it is important to be adaptable and as restrictions change “we’ll play it by ear.”

Fifteen minutes west of Iowa City, the city of West Branch straddles the divide between Johnson and Cedar Counties. Although Cedar County is one of 77 counties that were allowed to reopen May 1, local restaurants in West Branch, population 2,200, are opting to stay shuttered to the public amid COVID-19 spread.

Iowa Gov. Kim Reynolds announced April 28 that 77 Iowa counties could reopen restaurants, fitness centers, malls, libraries, race tracks, and certain other retail businesses to reopen at 50 percent capacity at their own judgement at the beginning of the month.

Because of West Branch’s proximity to Johnson County, which remains closed due to COVID-19 concerns, the city’s Mayor Roger Laughlin said local restaurant and business owners have largely decided to continue conducting carry-out and delivery operations only and don’t plan to consider reopening dining areas for another few weeks.

“It’s too soon,” Laughlin said. “They’re worried, because we’ve got a lot of elderly clientele, if you open it up, they’re going to come and [owners] just don’t feel right about opening up quite yet.”

While no formal order from city officials is keeping businesses from reopening, Main Street Sweets Manager Steven Grace in West Branch said his decision to keep the dining area closed and continue with carry-out and delivery options was spurred by the fact that the city is in such close proximity to five of the 22 counties that were ordered to remain closed — Johnson, Linn, Muscatine, Scott, and Washington Counties.

“We’re just going to follow the information that comes from the state and see where we’re at two weeks at a time,” Grace said. “If it looks like it would be worthwhile and safe to do so, we might look at slowly reopening a little bit, but we want to balance that safety of both [our] staff, our customers, and the community with being able to return to some sort of normalcy.”

He said that West Branch residents worry if local restaurants and businesses reopen again that people from Johnson County and other surrounding closed counties will travel to the city to do what they can’t in their own. People want to regain a sense of normalcy that the pandemic took away, he added, and would see neighboring, reopened counties as a way to do so.

As of Sunday, Johnson County had tallied 498 positive coronavirus cases, while Cedar County had just 31.

Laughlin said the city will watch how other reopened areas of the state handle the new circumstances and judge accordingly what West Branch should do moving forward, depending on what those cities experience.

Related: Gov. Kim Reynolds said Iowans must use their best judgement as parts of the state reopen on May 1

Laughlin said he anticipates a two-to-three-week lag time between when cities reopen restaurants and businesses and if those areas experience a “spike or uptick” in positive cases of the coronavirus. West Branch will monitor those changes, he said, and decide its next step depending on the outcome.

Johnson County Supervisor Chair Rod Sullivan said he has similar concerns and was pleased to hear that West Branch’s restaurants and businesses chose to remain closed at this time.

He stressed the importance of public responsibility and said that people should continue to keep enacting safe practices, such as social distancing, regardless of what the reopened counties decide to do.

“I wish that the governor would have kept it that way — but she obviously didn’t,” Sullivan said. “So, hopefully folks will take it upon themselves to behave in a safe manner.”