‘It was horrifying’: Revisiting the Kent State shooting’s impact on the UI campus 50 years later

On May 4, 1970, four students were killed on Kent State’s campus by the Ohio National Guard. Various student demonstrations occurred across the country in the years following, including several at the University of Iowa. 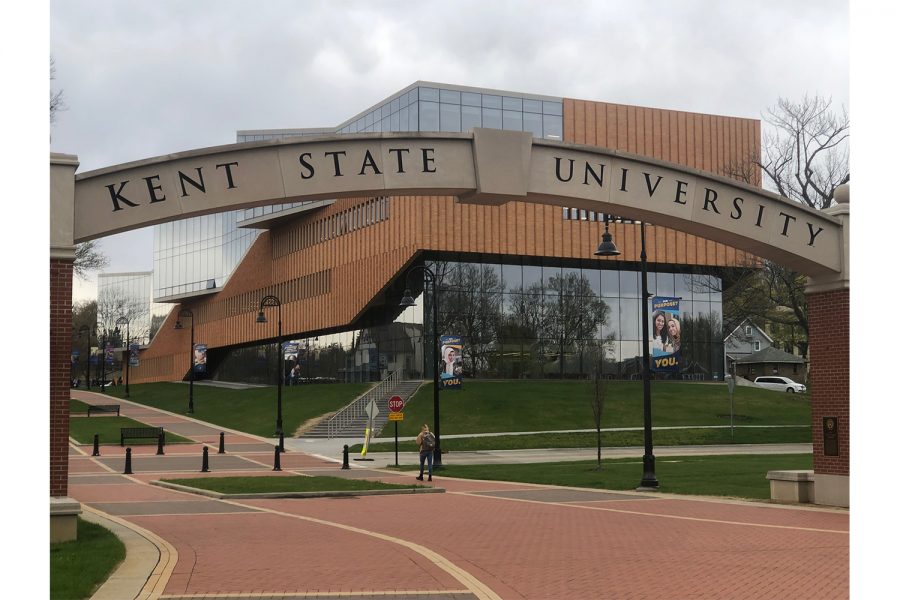 Kent State University has canceled plans to commemorate the 50th anniversary of the May 4, 1970, shootings.

When Willard “Sandy” Boyd became University of Iowa president in 1969, he never expected to receive the news a year later that students just a few states over had been killed on a college campus.

A demonstration at Kent State University against the Vietnam War broke out on May 4, 1970. At the protest, four students were shot and killed by the Ohio National Guard, and nine others were wounded.

The news rocketed around the U.S., and ignited student protests at college campuses, including the UI, leading to a semester cut short and the creation of a new student representative on the Board of Regents.

In a phone interview, Boyd — now 93 — said that he knew tensions were taut on college campuses across the country, beginning as early as 1967 at the UI. But he never expected them to escalate the way they did 50 years ago.

“It was horrifying,” Boyd said, speaking from his room in Oaknoll, a retirement and assisted-living facility currently under lockdown to mitigate COVID-19. “… [I] lived at home, not in the president’s house, and the day after Kent State we came out to four [pretend dead] bodies lying in our front yard.”

Demonstrations swelled after Kent State, Boyd said. Before 1970, demonstrations mainly included peace marches and teach-ins, but the events at Kent State led to the escalation of protests to sit-ins in the president’s office and sleep-ins on the Pentacrest.

Witnessing Kent State’s response turning deadly and the growth in protests’ size on campus changed the way the UI reacted to students’ demonstrations.

“The public sometimes thought there should be only one way of responding, but our position was to watch every situation because they were different,” Boyd said. “We didn’t have a cookie-cutter [solution], but we looked at the situation and we talked to people. Our administration was always accessible to students.”

Following a large protest on May 7, 1970, that lasted until the early morning hours of May 8, The Daily Iowan reported there were mass arrests of protesters by Iowa highway patrolmen on the Pentacrest at Boyd’s request.

On May 9, 1970 Boyd said he regretted the arrests of peaceful protesters and he took full responsibility for the incident.

Boyd canceled the 89th annual governor’s day ROTC observance that was slated for May 9, 1970. That same day protestors burned down the Old Armory Temporary, a building on the UI’s campus that held the writing lab, where the Adler Journalism Building currently stands. Boyd responded by allowing students to leave campus with the grade they had upon departure. Classes continued, but many students opted to leave.

Boyd knew that it was important to keep students safe on campus, especially after the Kent State shooting. The UI administration’s primary goal became ensuring that the Iowa National Guard would never step foot on campus.

“It was [Iowa] Governor Robert Ray who made sure that we never had the National Guard dealing with protests on campus,” Boyd said. “We had the Highway patrol on campus, and they walked around campus and they developed relationships with students.”

Even as the University of Iowa became more accessible to women and minorities in the 1970s, Boyd noted the stark difference in public reaction to incidents at historically black colleges and universities.

“Some nights we had 4,000 people on the Pentacrest demonstrating,” he said. “… After Kent State … there was a similar situation that occurred at Jackson State that wasn’t reported or focused on. It demonstrated the great deal of racism in the country when we were still trying to open up our campus.”

The UI established its Afro-American cultural center in 1968, what is now the Latino Native American Cultural Center in 1971, and a Women’s Studies Program in 1974.

Steve Zumbach, who would become the first student representative on the public universities’ governing board, was an Iowa State University student and a national officer for the Future Farmers of America 138 miles away at the time of the protests. He attended a convention in Ohio directly after the Kent State shooting and was also in Wisconsin when a bombing at the University of Wisconsin-Madison’s Sterling Hall occurred four months later in August.

The Wisconsin State Journal reported on August 23, 2019, the bombing was an anti-Vietnam War protest carried out by four men, killing one researcher and injuring three other people.

Zumbach said it was clear then that the country was divided like never before.

“The country was so divided that many young people were concerned that we would never come back together,” he said. “Tensions were running high. We had witnessed horrors and tragedies. It was something the world had never experienced before.”

Zumbach became ISU’s student-body president in 1971 when tensions were still high across the state. It became clear to him, his fellow students, and their administrators that there needed to be improved communication to ensure the safety of students.

“We needed to develop a mechanism for students to respectfully disagree with decisions that were being made,” Zumbach said. “We had to learn from the mistakes of Vietnam and of Kent State. The 70s taught me that we needed to lead in a different way — a more community-based way.”

David Oman came onto the UI campus as a sophomore in the fall of 1971, just a year and a half after the Kent State shooting. As a student in the aftermath of such historical events, Oman said it sometimes felt like the country was being pulled apart at its seams.

“The country was truly divided and people were scared and sad and fearful because of the Vietnam War,” he said. “All the energy and angst came out in campus-wide demonstrations across the country. When Ohio’s Governor [Jim] Rhodes decided in the heat of the moment to bring the National Guard on campus to deal with protesters, it was a decisive and deadly turn in how the protests were being handled.”

Oman joined the KXIC radio station to pursue a journalism career, which allowed him to cover major events at the UI as a radio reporter — including when students at the university staged a protest and marched towards Highway I-80 in the spring of 1972.

Oman said students planned to create a human blockade and stop traffic on the Interstate, effectively shutting it down at great peril to their safety. The Des Moines Register reported on May 10, 1972 that 3,000 protesters attended.

Almost overtaken by protesters, Oman stood nearby the event with a tape recorder to collect audio for a radio report. He watched as hundreds of Iowa Highway Patrolmen were bused to the location.

“The young people moved up on Dubuque Street and were on the cusp of getting to the interstate,” he said. “The state patrol rolled in buses of troopers. I looked south and saw more than 500 students screaming and yelling a couple hundred yards away. I looked 50 feet away in the other direction and saw dozens of troopers.”

Oman said that he always felt safe on the UI campus, but in that moment on Dubuque Street, he felt scared.

“I made the decision at that point to move behind [the] patrol to protect myself and best report on the story,” he said. “[The patrolmen] were able to block the students from the interstate and keep them safe…The patrolmen and the students talked and in a very tense moment, it was dissolved, and no one got hurt.”

In response to increased student protests following the shooting at Kent State, there was a broad push for more representation of students in university decisions. A primary goal stemming from this decision was to place a student on the state Board of Regents.

Then governor of Iowa, Ray was hesitant to create the position, Zumbach said, but trusted Zumbach to represent the student perspective with his credentials as a former ISU student body president and a current UI law student. The two met for the first time in 1968 when Zumbach was a national officer for the FFA.

He said the governor was under a lot of pressure to give students more of a voice — a pressure Zumbach also felt once he took his seat on the board.

At Zumbach’s first board meeting, the regents were asked to pass the “Parietal Rule” which required students to live in the dormitories during their first two years of college. Zumbach said in the early 70s, students wanted to assert their independence and adamantly opposed the rule.

“At that meeting, I felt the pressure [Ray] told me I would be under as a student advocate,” he said. “We were dealing with students being rebellious and high vacancy rates in dormitories. This led to a loss in revenue that impacted the plans universities had for the future. It wasn’t the ideal issue to deal with as a new regent because Board of Regents institutions are all about access and we needed to maintain a low-cost education option.”

Zumbach said his main goal at the time of his first vote was to ensure higher education was available for students, regardless of the unrest due to the Kent State shooting and the Vietnam War. He said voting for the rule would have ensured an opportunity for a low-cost education for all Iowans, so he did.

When Zumbach left the board in July 1977, the DI wrote that he “showed the governor, regents, and the public that a young person could fulfill board duties.”
Interactive Timeline: Events at the UI Following Kent State

Zumbach, now 70, practices law as a partner at Belin McCormick law firm in Des Moines. Looking back on the shooting at Kent State and the unrest that followed, Zumbach said it’s an important moment for modern-day protests and those who are in leadership positions to remember.

“The 70s taught me that we need to unify voices and I’m still trying to do that in my community,” he said. “…And more importantly, we have to learn from our mistakes. Kent State and what ensued after taught us to lead with a heightened awareness and be thoughtful when we make decisions that impact others.”

Oman, now 67, transferred to the University of Northern Iowa in 1972 and graduated two years later with a B.A. in Speech and Political Science. Later, he worked for Ray, serving as his last Chief of Staff in the governor’s office, then as former Iowa Gov. Terry Branstad’s first Chief of Staff. He now works as a state and federal policy and political strategist.

Oman said the reactions of students to the Kent State shooting was a turning point in U.S. history that still has repercussions today.

“Students are always on the front line of what’s going on in the country,” he said. “We want young people to be aware and understanding. They should express themselves. That’s part of the college experience. Students have a right to protest and comment peacefully … What happened at Kent State, on the Iowa campus, and campuses across the world taught us that there’s a right and wrong way to react. I think the country learned that we should be more guarded about the use of force.”

Fifty years after the Kent State shooting that ignited protests across the country and led to a student seat among the regents that still exists, UI archivist David McCartney said it is important for students now to look back and remember what students in 1970 learned in the aftermath.

“Protest tactics may have evolved, but you still see the tradition of [activism] continue forward today…” he said. “There is greater mobilization now due to social media, but that is the single biggest difference between now and 1970. The spirit of protest remains.”