As uncertainty surrounds how community spread of COVID-19 will continue into the summer, Iowa City, Coralville, and North Liberty officials are determining what their traditional summer youth programs will look like. 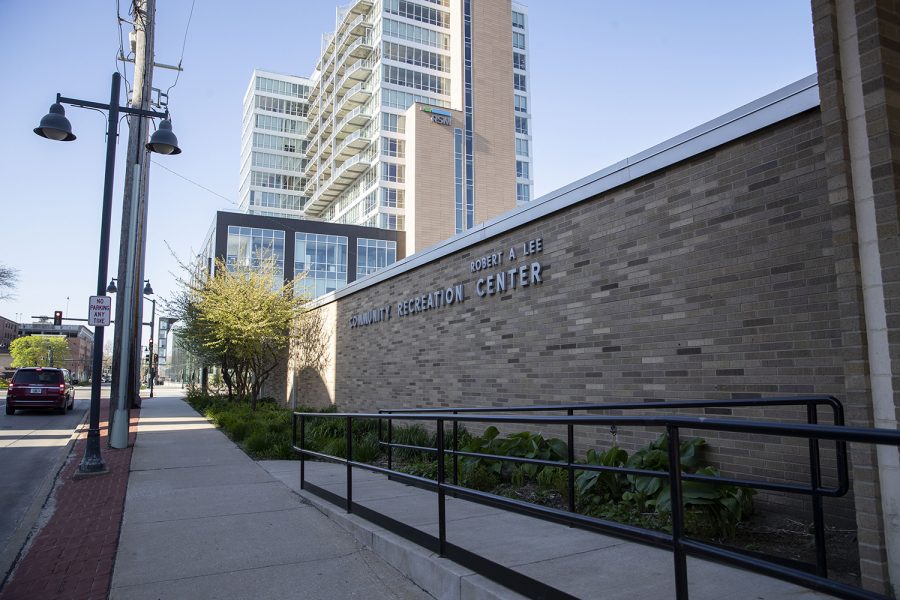 The Robert A Lee Community Center is seen on Thursday, April 30, 2020.

With summer around the corner, local Parks and Recreation departments have canceled summer sports activities, and are discussing options for other summer youth and recreation programs.

Iowa City Parks and Recreation will still have its summer day camp program for school-aged children since it serves as a childcare option for families, but it will be operating on a smaller scale, said Director Juli Seydell Johnson.

Although the department doesn’t have an exact plan in place yet, Seydell Johnson said group sizes for the day camp will be smaller — around eight children per counselor. The smaller groups will be in different rooms around the facility to allow for social distancing.

The camps will set up hand-washing stations and everyone who comes into the building will have their temperature taken, Seydell Johnson said. Equipment the children play with will be cleaned after they’re finished using it and children will be spaced out when doing crafts, she added.

“It’s a very different way of trying to do camp activities, when you think of camp activities there’s usually lots of close-contact games and hugs, and it’s really a close atmosphere,” Seydell Johnson said. “We are trying to have the same type of experience but keep that six feet of distance between each kid and counselor and adjusting as we go.”

Although having less children participate in the program will cause the department to lose revenue, she said it will save money by not going on field trips.

All summer sports activities in Iowa City have been canceled, but Seydell Johnson said her department hopes to have the community’s fields ready for games by Aug. 15 or whenever the school districts have their fall sports. The summer playground program in Iowa City, which is typically held in the mornings for younger children, has also been canceled, she added.

The department hopes to host “Party in the Park” events, a program that aims to bring families in different neighborhoods together, Seydell Johnson said, later in the summer as group-gathering restrictions are loosened.

Pools and splash pads are closed and it’s unclear when the parks departments will be told they can open, Seydell Johnson said. If pools are allowed to open, Iowa City will start by opening one or two, she said, and it will take a few weeks to get them ready.

The North Liberty Recreation Center will remain closed until the end of May and most recreation programs have been canceled for the months of May and June, said Recreation Director Shelly Simpson in an email to The Daily Iowan.

The summer camp program will be the only program offered June 1, she said. The program has been deemed essential to help adults who are returning to work and require childcare.

The program will have 60 participants over ten weeks, she said, and the children will be separated into smaller groups where social-distancing and proper hygiene protocols will be practiced. There will be no field trips, transportation, or swimming during the summer program, Simpson added.

“We will take a phased approach as we are able to add more use and will continue to prioritize what is essential,” Simpson said. “We continue to take a cautious approach for the safety of the entire community and staff.”

Although organized sports are canceled for the summer season, parents and their children are able to use the baseball fields in the parks to practice on their own, said North Liberty Parks Director Guy Goldsmith.

Baseball and softball tournaments are usually hosted at the fields in North Liberty and were booked for the summer, Goldsmith said. Tournaments through June had to be canceled and participants received refunds. The revenue loss for the department doesn’t outweigh the benefits of putting people at risk of getting sick, Goldsmith added.

The Coralville Parks and Recreation Department hopes to offer summer programming, but officials are still working on what those programs would look like, said Recreation Superintendent Scott Prochaska.

Registration for summer programs was supposed to begin last weekend but was delayed until an undetermined date because the department is unsure when the programs can start, he said.

The department is figuring out how many participants will be allowed in the programs, what cleaning schedules will look like, and how to ensure everyone’s safety, Prochaska said.

“On nice days we do still see a number of people out using the parks,” Prochaska said. “Our tennis courts are still open, those get full pretty quickly on nice days — so people are taking advantage of amenities that are still open.”