The virtual format has allowed more readers from all over the world to join in on the event, which will be held on YouTube. 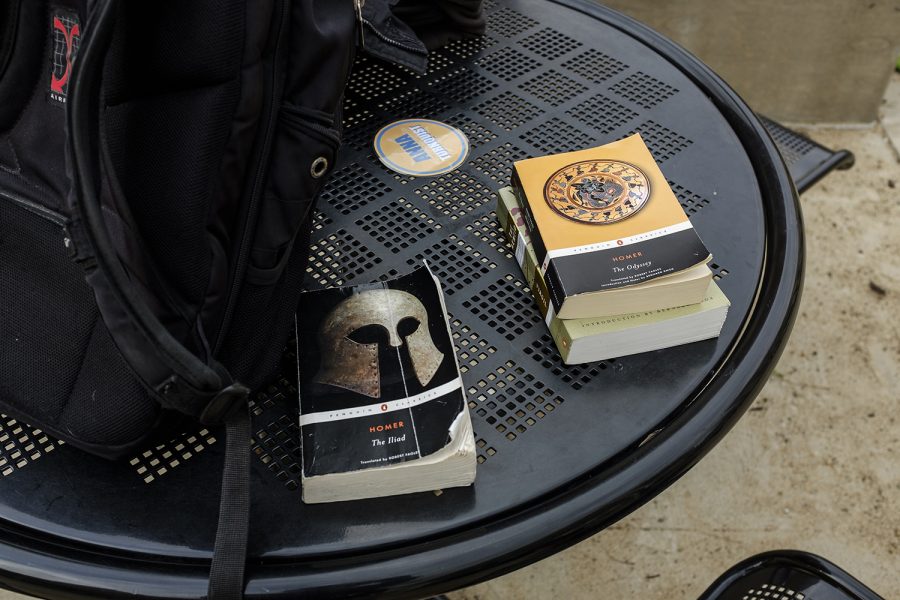 Copies of various works of literature from Homer sit on a table during the Homerathon on the T. Anne Cleary walkway on Wednesday, March 27, 2019.

Last year, students and members of the University of Iowa community gathered on the T. Anne Cleary walkway to listen to volunteers read The Iliad. Their reading took over 24 hours. The event, known as the Homerathon, has been held by the UI Classics Department and Eta Sigma Phi Honorary Society at University of Iowa for over 20 years.

This year, its format has moved online due to COVID-19, and will go live on the UI Department of Classics YouTube channel starting at 10 a.m. on April 30.

The new format comes after concerns that this year’s Homerathon would be canceled altogether. According to Classics Department lecturer Justin Vorhis, the department had originally considered not going forward with the event this year after the COVID-19 pandemic led to the closure of the UI campus. However, he said, the organizers selected to move the event online instead.

In the new format, volunteers were able to record themselves reading roughly 100 lines of Homer’s Odyssey and sent their recordings to an ICON page created specifically for the event, according to the department advisor for the Classics Department Lindsay Vella.

In order to find volunteers, UI director of the Latin Program Marcia Lindgren reached out to the Iowa City community, high schools, and community colleges to gauge interest in the online event. A virtual version of Homerathon was also advertised on Facebook. President of Eta Sigma Phi Honorary Society Amber Conger said her organization was also heavily involved in promoting the event across social media.

The event eventually received 140 responses, with exactly half of the interested participants from UI or somehow affiliated with the university, according to Debra Trusty, the director of undergraduate studies in the Classics Department. The number also includes almost every member of Eta Sigma Phi, volunteers from the Iowa City community and across other states, and even volunteers from outside the country.

“We’ve had people from the United Kingdom, one person from Italy, and one person from Costa Rica,” Vella said. “We’ve also had a lot of people who signed up who are high schoolers.”

Just like last year, UI President Bruce Harreld will give the introduction to kick off the virtual event.

Trusty said the Classics Department had slots for 125 people to read, meaning the response rate was overwhelming. After the readers were selected, Trusty said she took the seven different English translations of the Odyssey that the Classics Department decided to use and started to split them into 100 lines per person. She took photos of the pages on her phone and emailed them to the volunteers to use to send in their recordings.

“We have some really impressive high schoolers,” Trusty said. “We’ve got other [recordings] where people dressed up, we have families reading together.”

The virtual event will replace a Homerathon that was already in the process of undergoing extensive changes to make it bigger, according to Vella. The original event was supposed to take place over two days, with activities run by Eta Sigma Phi at the Iowa Memorial Union happening on the first day, and a live, 12-hour reading of The Odyssey by volunteers on the next, she said.

While Cogner said there had been worries that a virtual event would not gain any interest, the Homerathon has turned out to be a huge success.

“It’s been a really eye opening experience,” Trusty said. “Because you realize how universal the story really is by watching people read it.”