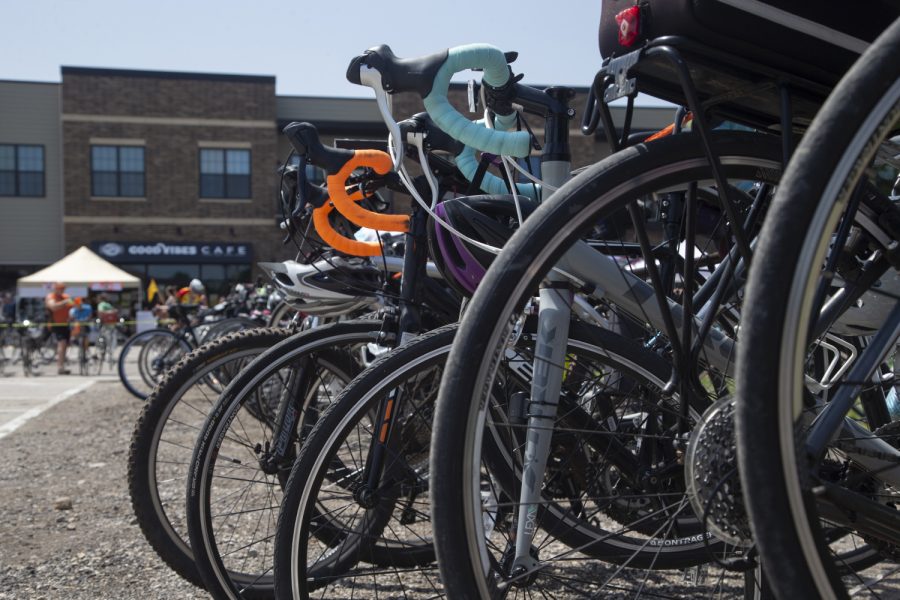 Bicycles are seen in Solon during the Big Rove bicycle event on Saturday, June 29, 2019. The route, which is part of the RAGBRAI training series, was 36 miles long starting in Iowa City with stops in North Liberty and Solon.

Iowa’s Ride has canceled its inaugural bike ride across Iowa to mitigate the spread of COVID-19.

Iowa’s Ride, created in October by former RAGBRAI staffers, was scheduled for July 12-18 to go through eight towns across Iowa, but the team decided it would be in the best interest of riders and volunteers to cancel, Iowa’s Ride announced on Monday.

“We carefully monitored the evolving pandemic and consulted with health and safety officials across the state and country and town leaders to base any decisions,” the Monday press release stated.

Organizers of the Register’s Great Annual Bike Ride Across Iowa resigned Oct. 15, 2019 in protest of its parent companies, the Des Moines Register and Gannet’s handling of criticism of including offensive tweets by “Iowa Legend” Carson King in their reporting. King donated $3 million to the University of Iowa Stead Family Children’s Hospital.

The organizers then announced they would launch their own, alternate bike ride, “Iowa’s Ride.”

Local schools in the bike route were going to be used as campgrounds, but following Iowa Gov. Kim Reynolds’ decision to close schools as well as recommendations from various safety agencies, city managers, and county supervisors, the Iowa’s Ride Director, TJ Juskiewicz, former RAGBRAI Director, decided to cancel the event.

“We knew the ride could not continue as planned. We do greatly appreciate your patience as we explored all possible options and assessed the health risks and the level of stress the event might place on the local health system and emergency services before taking this course of action,” the press release stated.

The Iowa’s Ride organizers kept from canceling the event as long as they could in hopes that the situation would begin to deescalate, the press release stated. Timely requirements such as permits, insurance, and licenses would have had to be secured soon, so a decision had to be made.

The Iowa’s Ride leaders had spent six months preparing for the event and proceeds from the ride were going to be given to charities in host towns and were also intended to bring an economic boost to Iowa small businesses, the release stated.

Iowa’s Ride won’t allow registration to be rolled over to the next bike ride, since it’s the organization’s first year on its feet, the release stated.

The event’s refund request deadline, however, will be extended to May 15. A registered participant is eligible to receive up to 75 percent off of their registration fees.

“As I stated before, a bike ride is never that important,” the press release stated. “We will remain hopeful that the health risks will eventually subside, and our country will get back to doing the things that we all enjoy like riding our bikes by ourselves or at large events.”