After starting their spring season with practices and games, the Hawkeyes continue being together and improving virtually. 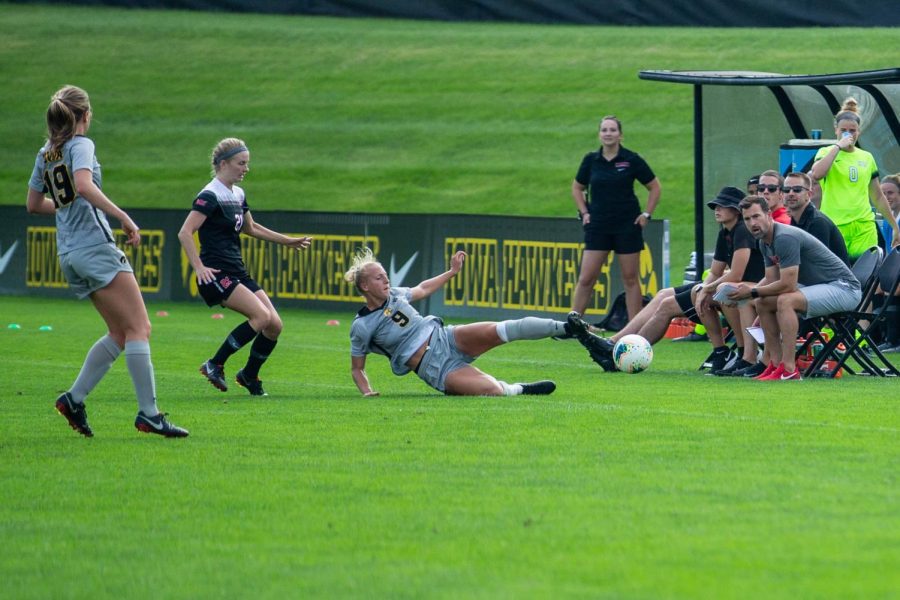 Iowa defender Samantha Cary tries to keep the ball in play during Iowa's match against Illinois State on Sunday, September 1, 2019. The Hawkeyes defeated the Red Birds 4-3.

Lost in the midst of Hawkeye sports missing competitions during the COVID-19 pandemic is soccer.

No, it didn’t miss out on a regular season or postseason like some other sports, but its spring season was cut short. Fortunately, the team got work in from January to mid-March, which included three spring season games.

This came after a historic season in which the Hawkeyes made the NCAA Tournament for the second time in program history. It was the first time that head coach Dave DiIanni took the Hawkeyes to the tournament.

“[The spring season] was good in the sense that the team that came back was very young, but there was still an understanding that there were very high expectations that they had to fulfill both individually and as a team,” DiIanni said. “And it was really nice to see that their effort, both mentally and physically, and their drive to get better was there.”

The team from last fall was led by 13 seniors. Many young players stepped it up during the spring season, DiIanni said. He said that defenders Samantha Cary, Riley Whitaker, Sara Wheaton, midfielders Josie Durr and Hailey Rydberg, midfielder and forward Melina Hegelheimer, and forward Samantha Tawharu — all of whom had good fall seasons — were expanding their role during the spring.

Players that didn’t get a lot of playing time in the fall but were making big strides in the spring were goalkeeper Monica Wilhelm and forward Daisy Light, according to DiIanni. Wilhelm has big spot to fill since she’s replacing Claire Graves — who played in 72 games in her four years at Iowa — and DiIanni said he wishes Wilhelm got more experience during this spring.

When the Big Ten suspended organized team activities on March 13, the team shifted to Zoom meetings. Everyone in the program — including the athletic trainer, academic advisor, and the strength and conditioning coach — meet every well. There are also position, leadership, and freshmen group meetings.

“We thought it was important to help provide as much structure as possible for their everyday lives, but also continuing to get better and giving them the resources and the opportunity to improve, because they deserve that and they require that,” DiIanni said. “They are a hungry group of women that want to get better.”

There is a bright spot in all of this, because it allows the team to focus more on video to see the finer details of the game. DiIanni said they sometimes don’t have the time to spend with each individual player or position group during the regular spring season.

With in-person recruiting banned through May 31 by the NCAA, DiIanni said it has allowed the coaching staff to get more organized and understand their priorities in terms of recruiting.

DiIanni said that the big concern is that in another two to three months if the players can’t come back to campus and work out with their strength and conditioning coach, they will have to go an alternative plan to get them ready for August. Currently, the team has provided virtual workouts that are voluntary.

“Right now, we’re just kind of taking it day-by-day and controlling what we can control, and I’m very happy with both our coaches and our players continued investment to learn and get better,” DiIanni said.