After Iowa Gov. Kim Reynolds announced that public schools statewide would close until the fall, high-school students involved in sports and fine arts are facing a loss of opportunity to compete and perform. 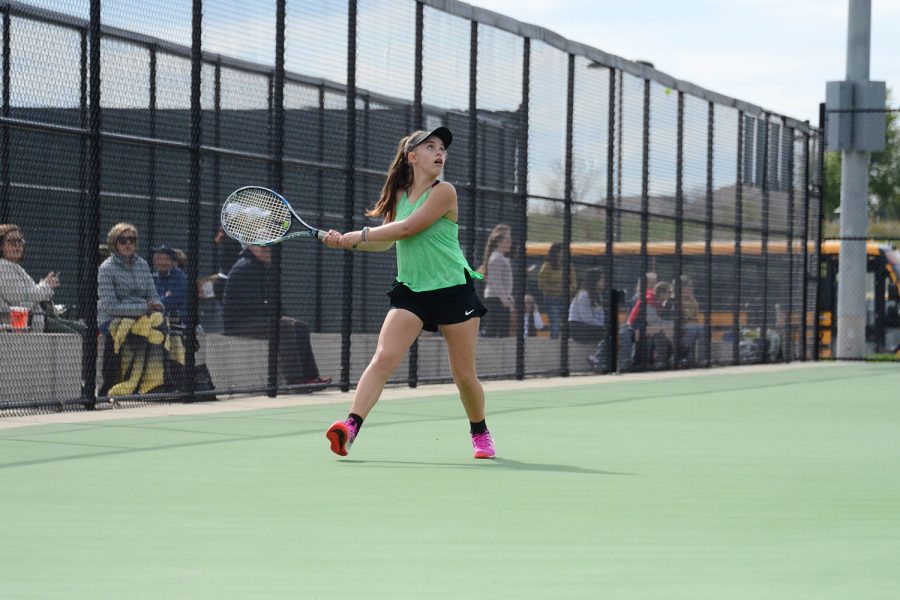 When Jessica Moonjely prepared for her final tennis season at Iowa City West High School, she was ready to create more memories with the team that had played a primary role in her high-school career. The season didn’t go as planned, however.

Iowa Gov. Kim Reynolds and the Iowa Department of Education announced April 17 that schools would remain closed for the rest of the academic year because of the global outbreak of the novel coronavirus. This decision also meant spring sports and fine-arts events would be canceled until the fall — including Moonjely’s competitive tennis career.

Moonjely began playing tennis when she was 9 years old and was slated to be the captain of West High’s team for the second year in a row. She was excited and already planning team-bonding activities before the appearance of COVID-19, Moonjely said.

“My job was to get everyone excited about the season,” Moonjely said. “We had quite a few freshmen who were joining the team and I was excited to welcome them onto the team. I’m sad I couldn’t do that, but I know next year the team will be great and I’m glad I could lead the team even for a little while.”

Moonjely was the only senior on West High’s team, and she plans to continue playing tennis on club teams after graduation. Moonjely said her team and her coach are still trying to do something special for her senior year.

Caroline Chandler, Moonjely’s teammate and a West High junior, plans to continue playing tennis in college, but said that losing her junior-year season made the recruitment process more difficult.

“By junior year, coaches are reaching out to you or you’re reaching out to coaches on your own,” she said. “Junior year is important because it’s the final push for you to get noticed by coaches at the state tournament and it’s your first year playing as an upperclassman and you can really showcase your playing.”

Without a state tournament for Chandler to compete in this year, she said the best she can do is focus on the future, keep practicing, and create a sense of community with her teammates, regardless of where they are.

“When we found out that we wouldn’t have a season, we had a team Zoom call and it really set in,” she said. “What I love about tennis is the chance to compete and spending time competing with my teammates. Now, we’re missing out on a year of that.”

In addition to the sudden end of sport seasons, fine-arts programs in the Iowa City Community School District watched their own performance dates slip away before Reynolds made her final decision to close schools.

Liberty High School’s production of Shrek was something twin brothers Aubrey and Beau Leavenworth were both preparing for when they received news that the production was canceled.

Aubrey was the head of sound at Liberty High and was looking forward to the opportunity to work with new people and equipment in April. He said the technical side of theater has opened his eyes over the years, and he will miss experiencing another opening night this spring.

“Being in a leadership position, it’s really rewarding to teach people on my [sound] team and share what I know,” Aubrey said. “I missed out on teaching the new freshmen on my team how to do certain things because we didn’t have a show.”

The Leavenworths are also involved in their school’s choir program. Beau said that even with the outbreak of COVID-19, his teachers and directors are still making sure students stay connected through arts and music.

“One of our wonderful choir directors, Mr. [Robert] Williams, put together a virtual choir for us to sing in this spring,” he said. “A lot of the people involved in the musical sang and it was a really nice way to still participate in choir while this crisis is going on.”

Beau said it is difficult to miss out on learning more from theater, which has taught him skills that he doesn’t learn in classrooms.

“Theater has really taught me how important it is to balance your life and always be a hard worker,” he said. “It taught me a lot about being part of a team and I’m losing that element of my learning right now.”

Iowa City High School senior Reese Hill was ready to take the stage in her school’s production of Matilda. In her final year of high school, Hill said she helped choreograph some of the scenes for the show and poured her heart into the production. When the musical was postponed until next spring, Hill said she was devastated.

“It really sucked,” she said. “I had spent so much time after school working on the choreography and trying to live up to the standard I wanted to… We also have this tradition on the final show for the seniors to all give speeches about their time in the drama department. We couldn’t do that this year in person, so we had a Zoom meeting and gave our speeches, so at least we had a little bit of closure that way.”

Hill will attend Grinnell College in the fall and plans to get involved in the theatre department. She said that while this transition has been difficult, she knows that her experiences now and in the past are worthwhile.

“I know theater is where I feel the happiest,” she said. “I’m being the best version of myself when I’m in theater. Regardless of [COVID-19], I’m excited for the future.”