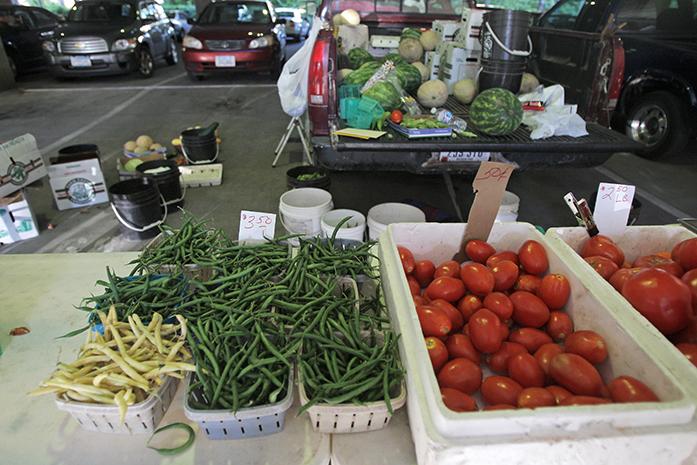 Fresh produce sits out at the Farmer's Market on Wednesday, Sept. 9, 2015. A new study from the UI shows that the number of farmer's markets has gone up and more people are buying their food locally.

Iowa Gov. Kim Reynolds announced a statewide lift on the ban on elective surgeries and farmers market operations beginning on Monday, as coronavirus cases continue to spike amid ramped up testing.

Reynolds called the action the “first step” in the process to reopen Iowa to economic activity, adding that she would make further announcements on Monday relating to closures that are supposed to end by the first of May.

Despite Iowa’s peak in coronavirus cases expected to be two to three weeks away, Reynolds said that Iowa’s ramped up testing measures are the reason she believes the state can monitor outbreaks and is ready to begin lifting closures.

She said that hospitals would need to meet certain requirements to be allowed to continue elective surgeries. Hospitals would have to supply their own personal protective equipment and not rely on state or federal stockpiles, must continue to accept COVID-19 patients for treatment, and reserve at least 30 percent of beds for expected COVID-19 patients.

At farmers markets, she said attendees should continue to stay six feet apart from one another, and people shouldn’t congregate around stations. She added that in order to ensure social distancing, the police would be able to be there to educate and disperse people as needed, and in a last-case resort, ticket someone. Iowa City’s farmers market transitioned to curb-side pickup this month, announcing that the organization wouldn’t resume normal operations until at least July 4.

“While there are some areas in our state where virus activity is still high, we have many more areas where it is manageable and even minimal and this presents an opportunity to reopen Iowa in a phased and responsible manner,” Reynolds said Friday.

However, Reynolds maintained that the spike in cases is due to the state sending more tests to essential workers and “hot spot” areas such as meat-packing plants and long-term care facilities, and are catching more positive cases than the state would’ve before.

One in 98 Iowans have now been tested for COVID-19, she said.

The state’s peak in positive cases, however, isn’t predicted to pass for another two to three weeks, said IDPH Deputy Director Sarah Reisetter. The University of Washington’s IHME database predicts Iowa’s peak in deaths to be May 5.

According to guidelines set by the Trump administration, before entering the first phase of reopening, states’ new COVID-19 cases should be in downward trend and a robust testing system should be in place.

Reynolds said that while the state was working within those guidelines, the state would also be looking at Iowa’s county-by-county data on deciding where in Iowa a relaxation of closures would work best.

Reynolds launched Test Iowa on Tuesday, a testing program contracted between the state of Iowa and Silicon Slopes technology companies Domo, Qualtrics, and NomiHealth that’s meant to deploy widespread COVID-19 testing to regions across Iowa. The company, which has been conducting a similar partnership with Utah was initially brought to the governor’s attention by Iowa native and actor Ashton Kutcher, Reynolds said.

The first testing site is expected to be set up in Polk County on Saturday, Reynolds added.