UI student urges next Diversity, Equity, and Inclusion leader to report to president

Hawkeyes offered feedback for the next associate vice president for Diversity, Equity, and Inclusion to strengthen ties with underrepresented communities on campus in a virtual meeting. 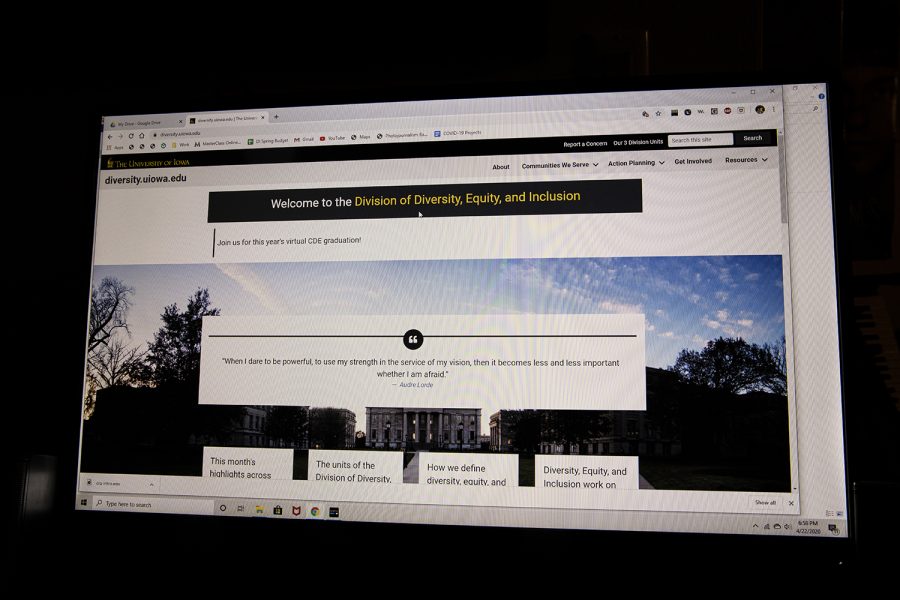 A University of Iowa student suggested the next associate vice president for Diversity, Equity, and Inclusion report directly to the UI president to strengthen connections between Hawkeyes with marginalized identities and those in top leadership roles in a virtual meeting April 22 with search firm Isaacson, Miller.

Isaacson, Miller hosted password-protected meetings via Zoom with three separate time slots for UI students, faculty, and staff April 22 to receive feedback on what a search committee should look for and expect from an associate vice president for Diversity, Equity, and Inclusion. Thirty-nine students attended the section, which marks the early stages of the UI’s second search to fill the position in about a year.

RELATED: University of Iowa to launch another search for associate VP for Diversity, Equity, and Inclusion

UI senior Isabela Flores said she feels that the new associate vice president for Diversity, Equity, and Inclusion should report directly to the president, especially if this person were to sit on the President’s Cabinet and work to improve that core group of administrative leaders who advise UI President Bruce Harreld.

Flores said the Division of Diversity, Equity, and Inclusion leader would be someone who would work to support marginalized students through the recruitment and retention of faculty and staff of color and other marginalized identities, and would presumably also be in communication with students of these identities.

The person in this position would therefore have the most pertinent information that should be communicated directly to the president, Flores said. The associate vice president has the potential to establish a foundation of trust between the President’s Cabinet and marginalized communities on campus, which Flores said has yet to be developed in a concrete way in her time at the university.

“There have been a lot of times where a lot of identities were attacked on this campus, in many different ways,” Flores said.

Donna Cramer, a representative from Isaacson, Miller who hosted the student session, said the person who holds the position will report to the provost.

The three leaders of the Division of Diversity, Equity, and Inclusion units — the Center for Diversity and Enrichment, Diversity Resources, and the Office of Equal Opportunity and Diversity — now report through the Provost’s Office. Georgina Dodge, who held the same role under the chief diversity officer title until the summer of 2017, reported directly to the president.

A Daily Iowan review of the UI’s peer universities’ charts outlining the reporting structure of their administrators showed that those holding similar roles at seven of the 10 comparable schools report to the president instead of the provost or a vice chancellor, as reported September 2019.

Whereas on the issue of tuition, Harreld has advocated for its cost to be at or above the median of the peer group, he said in a September 2019 DI interview the UI felt comfortable straying from the peer group in this reporting structure because “context matters.”

“You have to look at specific situations and you have been careful that you don’t go looking at peer groups, and their context is different than yours, then adopt their structure or whatever policy and apply it to your institution,” he said.

He also said this structure of reporting through the provost would allow the UI to advance the goals outlined in the Diversity, Equity, and Inclusion Action Plan pertaining to faculty, as the provost oversees the institution’s academic operations.

Cramer said the firm wanted this opportunity to talk to students.

“Unfortunately, we weren’t able to come to campus, which would have been our first opportunity to come to Iowa and see the University of Iowa,” Cramer said. “So this is our opportunity to really get a sense of what it is like for students.”

UI student Paul Richards, representative to the Veteran Constituency in the UI Undergraduate Student Government, referenced his feelings of exclusion on campus as a veteran. The veteran population makes up 6 percent of students on campus, Richards said, and they face difficulties.

Richards described the problems between the Veterans Education Transition Services and the Center for Diversity and Enrichment before it was placed under the Registrar’s Office. The veteran organization was initially located in the recently torn down Communications Center, before moving to the second floor of the Old Capitol Mall into a space of 250 square feet for around 2,300 military-affiliated students.

Now, it’s being moved to the second floor of Calvin Hall, another one of the oldest buildings on campus.

“We would just like to ensure that our voices are heard, as we do represent 6 percent of the student population,” Richards said.

Using the feedback from the forum, Cramer said the firm would create a “position profile,” or a six- to eight-page document that will highlight the opportunities and challenges of the position.

“[The document] really tells the story of the University of Iowa — where you are, where you’re going, and where you’ve been, [and] challenges and opportunities for that person and then the qualifications and experiences,” Cramer said.

The UI is slated to announce its new associate vice president for Diversity, Equity, and Inclusion by spring 2021.

The forum comes a year after the university’s initial search to fill the position in April 2019, which resulted in the hiring of former Associate Vice President for Diversity, Equity, and Inclusion TaJuan Wilson, who resigned from the position in August 2019 after a seven-week tenure.

The role has been vacant since Wilson resigned, though he stayed with the UI as special assistant to the vice president for External Relations before eventually taking a position at Georgia Southern University as its first associate vice president for Inclusive Excellence.

Per his separation agreement with the UI, signed before his resignation, Wilson was permitted to telecommute to work and job search during work hours, in addition to keeping his annual $240,000 salary. His agreement stipulated that he “voluntarily resign” from the UI no later than Jan. 31.