As Iowa’s bars and restaurants close, Hawkeyes are drinking from home

Despite the closure of Iowa’s bars and restaurants during the coronavirus pandemic, a recent poll says 47 percent of Hawkeyes are drinking while working from home. 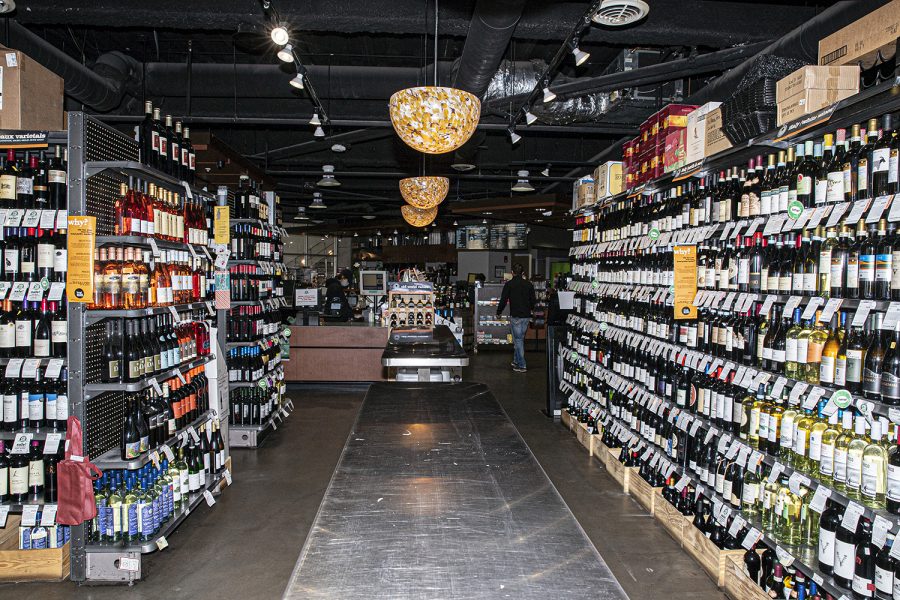 The wine aisle at Bread Garden Market is seen in downtown Iowa City on Wednesday, April 15, 2020.

It was around 4 p.m. on a rainy Tuesday afternoon when I held the Kum & Go door open for a college-aged man holding a half-dozen cans of Four Loko, a caffeinated, liquor-infused concoction that remains a favorite among college students.

“Yeah, man,” he replied. “You’ve gotta be ready for the quarantine.”

As Iowans transition to working from home and downtown bars close to the public, recent surveys suggest they are transitioning their drinking habits as well.

According to a recent poll conducted by alcohol.org, 47 percent of Iowans are drinking alcohol while working from home. Of the 3,000 workers surveyed, beer seems to be their primary choice, with 1 of 5 respondents saying they stockpiled liquor before the state’s dine-in restaurants and bars temporarily closed their doors.

The executive order, which is aimed at bolstering cashflow for affected businesses, applies to any establishment that holds a Class C liquor license. This normally allows bars and restaurants to sell wine, beer, and liquor for consumption on the premises and unopened beer and wine coolers for takeout.

Tom Lally, a sales manager at Okoboji Wines, said roughly half of Okoboji’s sales come from restaurants; although the temporary closures concerned him extensively, he added that individual sales have remained consistent during the COVID-19 pandemic.

“We’re holding steady with our individual sales, which makes me feel confident because you are seeing … restaurants closing their doors for good because of the coronavirus,” he said. “I think that moving forward, curbside pickup and online orders will help save a lot of local business.”

Lally also referenced a recent Neilsen poll that said liquor sales were up roughly 60 percent in March, with a “sweet spot” price of between $11 and $20 for a bottle of wine. As a sales manager at Okoboji, Lally added that he has guided many customers through the exploration of new varieties of wine.

Doug Alberhasky, manager at John’s Grocery, said the community support he has felt during the pandemic has been moving. As a third-generation owner of John’s Grocery, he added that it has been “inspiring” to see people shopping at local grocery stores for their daily needs, including wine, of course.

“People have been stepping up,” he said. “Our business is unique in the fact that in normal times, a large portion of our business is student-related. With that shifted as students moved home, our liquor and beer side of the business has been fairly consistent.”

To Alberhasky, the realization by many Iowa City residents of the important role local businesses play in the community is of the utmost importance. Paired with this, however, is an equally important realization that supply chains have been as impacted by the virus as the establishments they service.

“Especially for a smaller business, supply chains are so important,” he said. “I hope that when this is all said and done that people may avoid shopping at big-box stores more. When we … first learned that there were cases of the coronavirus in Iowa, that was an ominous day. I’m the former president of the Optimist Club, and I tried to be optimistic but I also tried to be realistic.”

Lally echoed this sentiment, adding that he hopes support for locally owned businesses does not diminish once the coronavirus closures diminish. As for the perfect stay-at-home bottle? He recommends something light.

“A pinot noir or a rose maybe,” he said. “We could all use a little relaxation right now.”