The Congolese Health Partnership has started a Protecting Our Community video series in six and soon to be seven different languages to spread information about COVID-19 among refugees and immigrants in Iowa City. 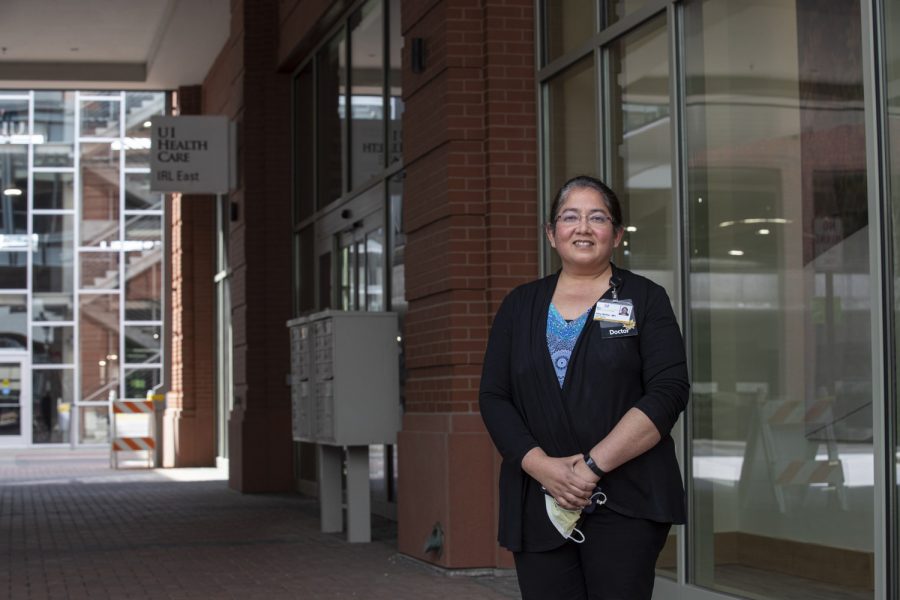 Alka Walter poses for a potrait in front of the UI Health Care Iowa River Landing East Clinic on Wednesday, April 22, 2020. Walter is a clinical assistant professor in the UI Carver College of Medicine and serves as the Congolese Health Partnership co-chair.

An Iowa-based health partnership created multilingual video series to help inform immigrants and refugees about COVID-19 and curtail the spread of misinformation.

The videos were produced by the Congolese Health Partnership, a collaborative effort established three years ago by University of Iowa Hospitals and Clinics, College of Public Health, and leaders within the Congolese community of Johnson County.

The three-part series, shot in six and soon to be seven different languages, is called, “Protecting Our Community” and is posted on the partnership’s website. While the videos were originally targeted toward the Congolese community, additional languages have been added to reach other immigrant and refugee groups.

“I shot a message out to our CHP group and asked what we could do to try to help the community during this time,” Story said. “We basically just started hearing a lot of people talking about misinformation, that there is a lot of information they don’t know how to process, and that there is just a lot of fear and anxiety in the community.”

Alka Walter, the partnership’s co-chair and a UI family-medicine clinical assistant professor, said that Congolese community members of the group shared some of the myths about COVID-19 they had been hearing.

“What was more worrying was that people didn’t think that it was going to affect everybody,” Walter said. “People thought that it was sort of limited to older folks, and they still wanted to congregate to go to church or to funerals.”

Story and Walter both said the video format was very important to get their message out because many people in the Congolese community already get their information through video and audio media.

“WhatsApp and Facebook were the main ways that people communicate because people want information quickly, and they want it in an audio/visual form,” Walter said.

Story said each three-part series uses the same script and information but varies in language. The videos are currently available in English, Spanish, French, Swahili, Kinyarwanda, and Lingala.

The first two videos contain information that anyone can use since they explain what the disease is and how to prevent transmission, Story said, but the third video is tailored to the Iowa City area because it talks about UIHC.

“We’re working with the Iowa Department of Public Health to try to get the first two videos out there, and I have even heard of other people sending them to people in the Democratic Republic of the Congo and other parts of the world.”

Walter said the Congolese Health Partnership has received a lot of positive feedback from its targeted communities about the videos.

“We’ve had really good feedback from folks in the Congolese community who are watching those videos and sharing them on their WhatsApp groups and on Facebook,” Walter said. “On the other side, our videos have been used by the University of Iowa in the respiratory clinic, which was very encouraging.”

Walter and Peter Nkumu, leaders within the Iowa City Congolese community, both said that while these videos are an important step for helping immigrants and refugees deal with this crisis, there is still a lot to be done.

“I feel that it is very important that the city, county, and state leaders involve the local immigrant leaders because they are being affected the most by this,” Nkumu said. “We have to raise our voice and act, and I think they are now starting to get immigrant leaders involved, but we need to have the local leaders really engage with every aspect of the community to try and mitigate this crisis.”