‘Yo no soy un delincuente:’ Iowa agencies call for the release of immigrants from deportation centers amid COVID-19 pandemic

Growing concerns over the spread of the novel coronavirus across prisons and correctional facilities has prompted the Iowa American Civil Liberties Union, and other Iowa agencies to call for different measures in how ICE detains immigrants, and for them to facilitate the emptying of detention facilities, aiming to prioritize the public health of immigrants, staff, and litigators. 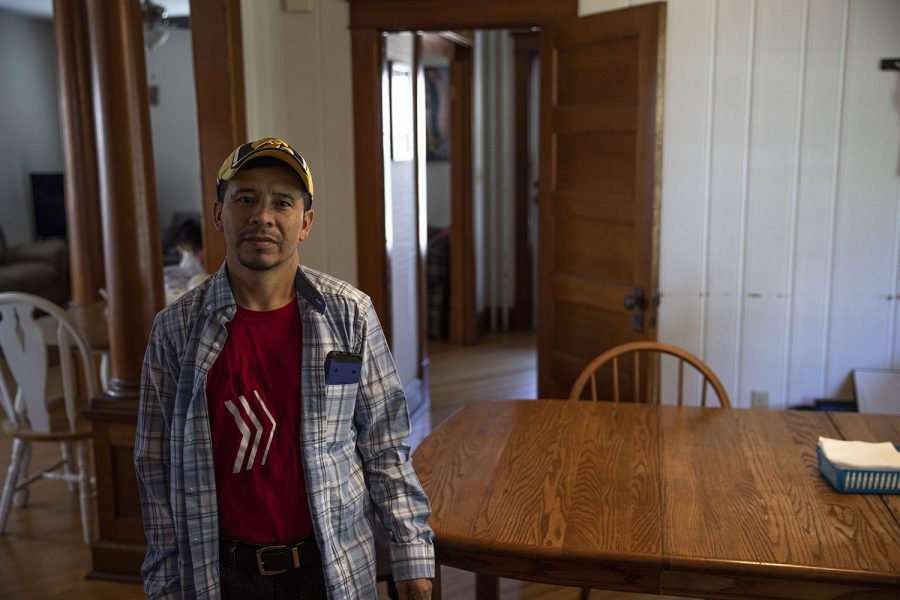 Jacinto Rivera Ramirez poses for a portrait in the dining room of the Catholic Worker House on Saturday, April 18 in Iowa City, Iowa.

Sitting on the attic couch of the Iowa City Catholic Worker House, Jacinto Rivera-Ramirez looked down at the monitor bracelet on his ankle, issued to him by Immigration Customs and Enforcement Officials in Ohio as he waits for his next immigration court proceeding.

Speaking in Spanish, he said he has no intention of becoming rich or staying in the U.S. forever. He said he just wants the opportunity to prove he’s a hard worker and earn enough money to meet basic human needs, support his family, and eventually move back to Guatemala and start a business.

“… More or less for a daily sustenance. Make a little money, do a little business. That is the mentality that I have,” Rivera-Ramierz said.

In recent weeks, there has been an increasing number of COVID-19 cases among U.S. detention facilities. Rivera-Ramirez’s native country, Guatemala, has reported several different cases of deportees from the U.S. returning to the country and testing positive for the virus.

A few days ago, Rivera-Ramirez said he found out that his brother, who was living and working in Cedar Rapids for seven years, has been held at the Linn County Correctional Center for the last 10 months, after he got pulled over for drinking and driving.

Rivera-Ramirez said he thinks people like his brother should be released from detention facilities, because they fail to meet safety standards or mitigate the risk of COVID-19 spreading throughout them.

“I am not a criminal,” Rivera-Ramirez said.

Amid community spread of the novel coronavirus, the American Civil Liberties Union of Iowa and other organizations and immigration attorneys across the state are calling for the release of immigrants detained in Iowa jails, and the temporary suspension of other deportation activity in Iowa.

These organizations are asking Immigration Customs Enforcement and Iowa leaders to prioritize the public health of immigrants and mitigate the spread of the contagious virus among jails and detention facilities throughout the state.

Thirty-seven Iowa legal and advocacy organizations, attorneys, and law firms sent a letter on April 16 addressed to the regional director of the U.S. Department of Homeland Security, urging ICE leaders to halt new detentions and release those already detained in Iowa jails.

“We’re asking them primarily to do four things in order to curtail and hopefully prevent the spread of COVID among immigrant detainees,” ACLU of Iowa staff attorney Shefali Aurora said.

Aurora said the four requests outlined in the letter are:

To ensure there is no discouragement of immigrants seeking medical attention
To review individuals in ICE custody on a case by case basis and identify based on health conditions who should be released immediately based on health conditions
To ensure immigrant detainees have free access to health care, hygiene products, and communication services, with contacts such as lawyers
For the office of the chief counsel within ICE to stop the practice of resisting bond requests and work with attorneys representing immigrants to “facilitate the emptying of all facilities”

Aurora said it’s important to take action before COVID-19 spreads among immigrant detainees. He added that a lack of action would jeopardize not just the health and safety of immigrants, but also ICE officers and facility staff.

“At the end of the day, the bottom line is that we hope that ICE understands that this is important to keep the immigrant community as well as the ICE Officers and jail staff safe,” Aurora said.

According to a statement from the U.S. Immigration and Customs Enforcement emailed to *The Daily Iowan* by public-affairs officer Shawn Neudauer, ICE reviews decisions to release individuals every day on a “case-by-case basis.”

“Due to the unprecedented nature of COVID-19, U.S. Immigration and Customs Enforcement is reviewing cases of individuals in detention deemed to be at higher risk for severe illness as a result of COVID-19. Utilizing CDC guidance along with the advice of medical professionals, ICE may place individuals in a number of alternatives to detention options,” the statement said.

As of April 10, 693 individuals have been released from ICE custody during COVID-19, according to the statement. USA Today reported April 7 that ICE holds more than 34,000 detainees, and of those individuals, 60 percent have no criminal record and are detained over a civil immigration violation.

There are no detention centers in Iowa, said Jessica Malott, immigration attorney and partner at Vondra & Malott PLC, but there are various jails throughout the state that have contracts with ICE to house detainees.

Malott said she thinks the reasons motivating the ACLU’s letter are pretty apparent. Adding detainees to existing prison populations that already live in such close quarters means an outbreak is very likely to occur.

A lot of people have been urging ICE to release low-level offenders and people with high health risks, Malott said.

In addition to the ACLU, the list of those calling for the release of certain detainees includes the Congressional Hispanic Caucus and thousands of medical professionals, according to NBC.

“… ICE really does have the power to do that. They do not need to keep people detained, there are other alternative ways that they can keep track of people if that’s their ultimate concern, which it is,” Malott said. “They can give them an ankle monitor, they can have them call and check in, they can also do an order of supervision, where they require them to check in personally at a later date.”

Malott said based on her experience throughout the COVID-19 pandemic, the immigration courts have been quite accommodating to attorneys, but she thinks that ICE should consider stopping or postponing deportation proceedings to prioritize the health of everyone.

“…ICE should make determinations and go through peoples cases case-by-case and determine whether the can be released because it’s certainly — I mean yes, the attorneys perhaps can appear on the phone — but you have the judges, and the court staff, who are all physically there sometimes with the respondent in close quarters, other times the respondent is allowed to appear on video, and each court is a little bit different, but certainly, just the health of everybody should be the most important driving factor,” Malott said.

Visiting clinical Professor Geoffrey Heeren, interim director of the immigration clinic at the UI, said that — although he would be surprised if President Trump’s administration released immigrant detainees — at this point, he thinks ICE releasing immigrants from detention is the right thing to do for public-health purposes.

Immigration detention is not criminal incarceration, Heeren said. Its purpose is civil detention — to assure that people attend their immigration court hearings.

“I think that there are a lot of options other than detention,” Heeren said. “At this point in time, the public-health reasons for releasing people greatly outweigh whatever justification there is for holding people.”

Rivera-Ramirez said his brother recently received the news that he was going to be released, but he didn’t know whether that meant staying in the U.S. or going back to Guatemala. He said if it’s the former, his brother would come and live at the Iowa City Catholic Worker House with him and his son.

If immigrants were released from detention centers, Rivera-Ramirez said the majority of people being held there now — especially those facing less serious charges — would not flee or try and escape persecution.

Like him and his brother, Rivera-Ramirez said, most of these people just want to be safe and the ability to work.

“For me, I don’t want to violate the law … nor do I have any intention of escaping,” Rivera-Ramirez said. “I want to comply with the law.”

Editor’s note: Jacinto Rivera-Ramirez’s interview with The Daily Iowan was done in Spanish with an interpreter present. English translations are in italics.