University of Iowa students grapple with how, whether to pay rent after classes transition online

Classes transitioning online and businesses shuttering has left some students wondering how they’ll pay rent in the final months of the online school year. 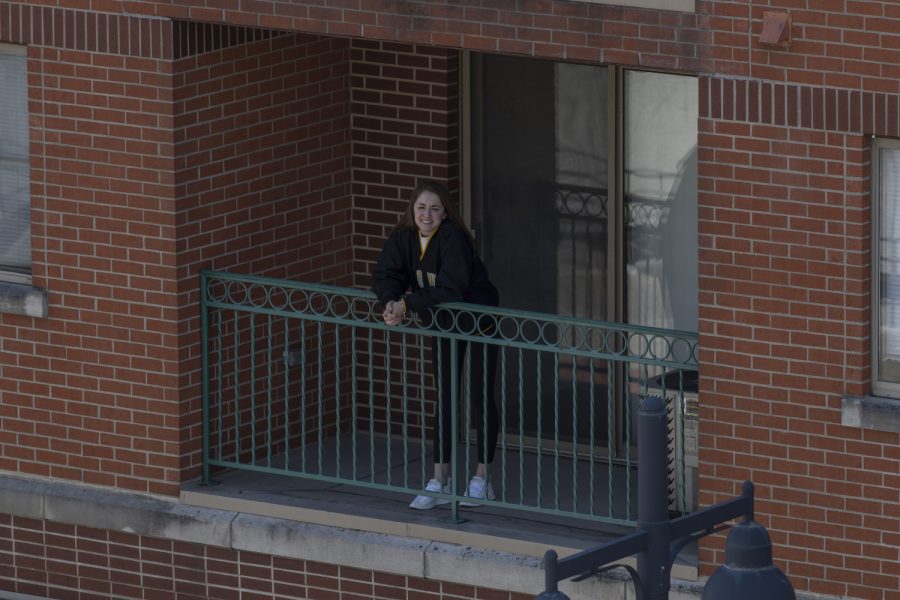 Nina Grover, a third-year UI student, poses for a portrait on the balcony of her apartment on Monday, April 20, 2020. (Jake Maish/The Daily Iowan)

University of Iowa junior Nina Grover was used to paying her groceries, rent, and insurance on time. She kept her finances minutely organized, maintaining one account for personal spending and another for her school expenses.

After spring break, she found out she wouldn’t be able to return to her part-time food service job in Iowa City because of novel coronavirus mitigation efforts, and her carefully planned budget suddenly unraveled.

She applied for unemployment benefits, but unsure of when those would kick in, she emailed her landlord a day before the first of the month asking about rent deferment options. She needed to stay in Iowa City, she said, as staying with her family in Illinois meant conducting online classes in a small apartment while sharing a room with her sister.

They worked out a plan to delay $300 of her roughly $600 rent payment, adding that as long as she paid it by June 1, her landlord would waive any late fees. She also applied for the UI’s Student Emergency Fund, which has doled out over $200,000 and received roughly 1,200 applications since spring break.

“It’s a decent amount of stress that’s lifted,” she said. “…when you’re 18 or 19 you don’t think that you’re going to have to offer unemployment.”

When classes transitioned online, on-campus facilities closed their doors, and most downtown businesses closed to the public, some students have had to grapple with how or whether to pay the cost of off-campus housing, and landlords whose tenants are predominantly students are delaying or doing virtual property showings while waiting on the university to concretely declare students will return to campus in the fall.

However, that doesn’t mean that renters are completely off the hook for rent, UI Student Legal Services Director Amanda Elkins said.

“Yes, you still need to pay rent — you’re just not going to be evicted for it,” she said.

She said her office, which provides free legal services to registered UI students and operates under the umbrella of the Dean of Students, received an influx of appointment requests, calls, and emails just before April 1 to ask for advice on topics ranging from terminating leases, to subleasing, to complaints of landlords showing units in-person while public-health experts are urging people to practice social distancing.

Some students who moved back home are wondering how to pay for housing now that they can’t use it.

One UI exchange student from Scotland, Aaron Burns Lee, returned to the United Kingdom on the first Monday of the UI’s spring break, leaving his soccer ball and skateboard at a friend’s place before cramming his things into two suitcases and boarding a flight home.

The now 21-year-old enrolled in the university in August 2019 and planned to return home in May, though decided to leave Iowa City early as international travel warnings escalated. By March 23, Burns Lee and his family in Liverpool were stuck in a nationwide lockdown order.

Not planning to return to the UI for the remainder of his lease — which runs until August — Burns Lee asked for a lease termination. His property manager denied the immediate request, saying in an email Burns Lee shared with The Daily Iowan that the company would put him on a subleasing waiting list and would release him from his rent obligation once the spot was filled. The manager offered to set up a payment plan.

But Burns Lee said he thought the offer was insufficient and insensitive, and he was anxious about still paying another four or so months of rent — at nearly $900 a month — for space he wasn’t living in.

“In theory, I would be able to pay, but it would cost basically all the money I have,” he said in an email to The Daily Iowan, adding that he was seeking legal advice on his next steps. He said he’s afraid if he elects not to pay, and the properties pursue a lawsuit, he could permanently damage his credit score.

“It’s really hard to know what the best thing to do is. I really do believe it is unfair to be charged in such extreme and unpredictable circumstances.”

Elkins, the UI Student Legal Services director, said landlords could still file suit for unpaid rent in the courts as soon as May 1 under Reynolds’ current order, although the Johnson County Sheriff won’t file evictions until May 4 and hearings couldn’t take place until June 15 per the Iowa Supreme Court.

She added that the issue of unpaid rent could spill over into fall and winter as property managers look for ways to collect unpaid dues.

“I’m worried about debt collection, to be honest — those students who for whatever reason can’t pay,” she said. “I’ve been working with other SLS offices to see, ‘Are there arguments we could make that the tenant shouldn’t be responsible for rent at this time?’ And because it’s an unprecedented situation, it’s not like we have prior experiences to draw on… The big question is, ‘How are the landlords going to deal with those deficits in the rent amount?’ ”

Kyle Vogel owns Keystone Property Management, which has about 500 properties in Iowa City and North Liberty, roughly half of which are student-rented, he said.

He said he hasn’t gotten any requests for rent deferment from residents in the properties he manages, but that some tenants emailed him early into the COVID-19 response in mid-March with questions.

He said he’s preparing to field more inquiries about rent leading up to May 1 since people were employed for around half of March.

University officials have said they’re planning for classes to resume in the fall, but Vogel said the college’s final decision will have the greatest impact on how many of his properties are full.

“The university and the student population are absolutely what drives everything in this town,” Vogel said.

He’s also conducting virtual showings instead of in person, as he normally would. From March 16-27, Keystone Properties canceled 60 hours worth of showings, he said.

“Normally we’re at probably 20 to 30 hours a week of scheduled showings, down to seven or eight hours of video showings,” he said.

But he said he thought that once the university was back in session, the lack of showings wouldn’t translate into more vacancies because housing would always be needed — unlike luxury goods industries.

The biggest change, he said, may be that showings that would’ve been done before May could be backed up into summer and early fall depending on when social-distancing recommendations are relaxed.

“We may end up Aug. 1 with, you know, 5-10 percent of our properties still vacant. And then suddenly have a two-week period where we’re just showing 24 hours a day in order to find people places,” he said.

Although Vogel’s transitioned most of his showings virtually (except for vacant properties), Community Health Manager Sam Jarvis said the Johnson County Public Health Department has been receiving complaints of some landlords entering apartments in-person.

The department is drawing up recommendations for both property managers and tenants to respect the public-health crisis, he said.

“I believe our kind of advice or guidance will be to, one, have people be reasonable — you know, tenant and landlord — and just recognize that right now we are currently in a pandemic, and we are asking people to socially distance, and so if they can just find some middle ground or have that ability to coordinate reasonable access,” Jarvis said.