After the cancellation of its scheduled Pride celebration for mid-June, Iowa City Pride is joining the movement of LGBTQ organizations around the world to encourage the community by participating in InterPride’s virtual Global Pride. 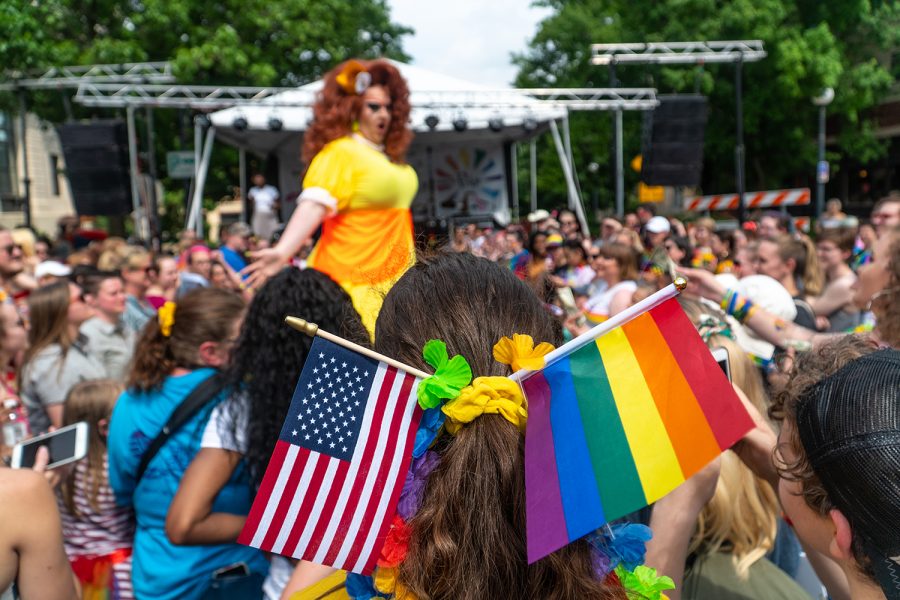 A crowd member watches the royalty show in Iowa City during the pride weekend on June 15, 2019.

After the cancellation of Pride events this summer, Iowa City and University of Iowa LGBTQ organizations are planning to move their celebrations online.

Iowa City Pride canceled its in-person summer festivities in an announcement on Monday, but the organization’s leaders plan to join peer organizations around the world in InterPride’s virtual Global Pride.

Iowa City Pride President Tony Sivanthapanith said the organization made the decision to cancel the in-person celebration after discussing logistics with health-care professionals and city officials.

While he is disappointed the organization couldn’t host the event in-person, Sivanthapanith said such a large-scale event, which attracts a 15,000-person crowd, didn’t seem like the “brightest idea” amid the rising number of COVID-19 cases in the state.

“I think a lot of people are very well aware of the situation and know what’s going on out there. So, there’s a lot of understanding that this is the best choice,” Sivanthapanith said. “And there’s obviously a lot of disappointment that’s going to come with it, as Pride is really important to a lot of people.”

He said Iowa City Pride plans to join the virtual Global Pride celebration that will be hosted by InterPride, an international nonprofit organization that guides and assists prides across the globe, June 27. Sivanthapanith said on Tuesday he reached out to InterPride and is waiting to hear back.

InterPride announced the live-stream event in a news release April 1, and invited people across the globe to join in for musical performances, speeches, and key messages from human-rights activists.

“We need community and connection more than ever. This gives us an opportunity to both connect and celebrate the LGBTQIA+ community’s resilience in the face of this pandemic and the true spirit of Pride,” InterPride Co-President Andrew Baker said in the release. “Pride 2020 represents a milestone for Pride events, with many honoring the 50th anniversary of their first gatherings and marches … and we would not let that pass without recognition and celebration.”

Iowa City Pride Vice President Cassie Mutum said the decision to cancel was heartbreaking knowing how much the community looks forward to the celebration. The organization is currently looking for smaller, alternative events to host throughout the year, she said, while still maintaining a safe environment amid the pandemic.

UI Pride Co-Chair and Pride Alliance Center Coordinator Emma Welch said the university planned to participate in Iowa City Pride, but because of the cancellation it will also move its plans online.

The virtual-contingency plan is still in the works, she said, but the goal is to provide opportunities to show the university’s pride for the LGBTQ community.

The Pride Alliance Center is working to keep a sense of community during this isolation period, Welch added, by using social media and online platforms to keep members engaged and connected. Zoom has become a major tool that creates a semblance of community and brings some face-to-face contact back, she said.

There is, however, an issue of accessibility for some members who don’t have internet, a stable WiFi connection, or their own computer, Welch said. The center is doing what it can to connect with those individuals, she added, but there’s only so much that it can do without its entire student and staff in-house.

Welch said the most important thing right now is to be there for students and work to keep a safe-space community available in every way possible. Not all students have an inclusive environment to go to when they leave the university, she said.

It’s sad to consider the inevitable reality that there are students who are currently existing in spaces that are not inclusive to those with LGBTQ identities, Welch said.

“College is such a great time where a lot of students are away from their family for the first time and can gain a lot of independence, navigate [their] identities, and really be comfortable in who [they] are,” Welch said. “And this pandemic is putting a wrench in this time of exploration and identity development.”