After getting drafted by the Indiana Fever, the guard seems to fit right in line with what the team wants. 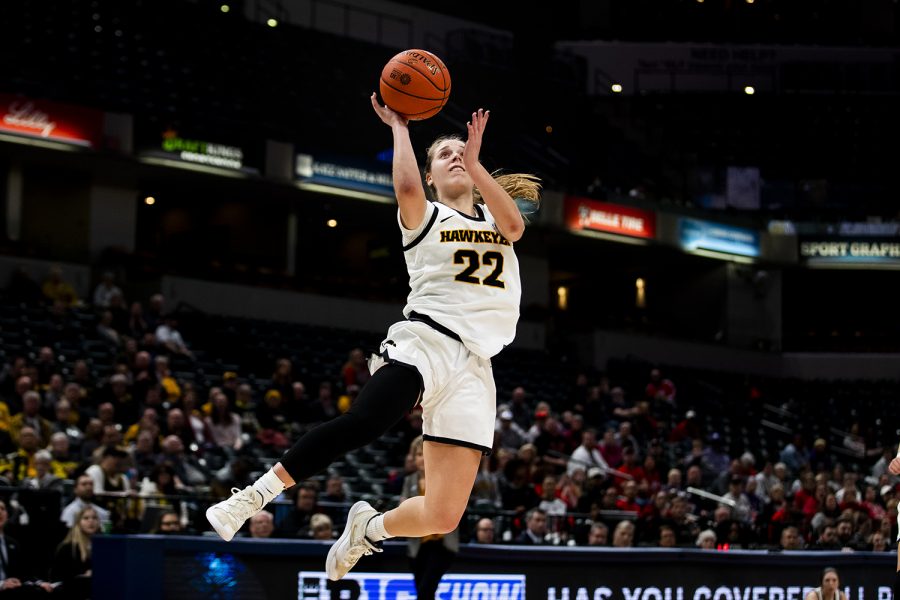 Iowa guard Kathleen Doyle jumps for a lay-up during the Iowa vs. Ohio State Women's Big Ten Tournament game at Bankers Life Fieldhouse in Indianapolis on Friday, March 6, 2020. The Buckeyes defeated the Hawkeyes 87-66.

The Indiana Fever seem to be on the same page as Kathleen Doyle.

Doyle, who was drafted by the Fever in the second round of the 2020 WNBA Draft Friday night, had good communication with the team before the draft. Indiana selected her with the 14th overall pick, much earlier than many expected.

“I don’t know if surprised is the right word,” Doyle said. “But I had a good interview with the Fever heading into the draft, and it was really exciting to see my name get called for sure.”

The Fever didn’t talk to Doyle any more than any other teams did, but her passion while playing — which has caught the attention of the nation — did resonate with them.

“We feel her energy,” Indiana Fever General Manager Tamika Catchings said. “I am an energy person. I am an energetic person in my role. I feed off of energy. Having the opportunity to talk to Kathleen during the interview process and even [Friday] night, we were just waiting and waiting and hoping that she would still be available at 14.”

Indiana Fever head coach Marianne Stanley described Doyle as one of the most competitive players in the draft and said that she’s a combo guard that fits the style that the Fever want to play, as she can be a great facilitator and make big shots.

“She just brings so much to the table that I’m very excited to see how she is going to fit in with what we already have, and she’s going to be somebody that I think that going to get people fired up when they see us play,” Stanley said.

The tempo that the Fever want to play at fits right in line with what Doyle said she wants.

“I know that coach Stanley wants to play at a fast pace tempo, so that works in favor of me and my game and what we did at Iowa,” Doyle said. “We like to get the ball up and down the court so that’s something that will be similar, and I have experienced doing [that] and I’m looking forward to that.”

The Fever are in a rebuilding mode. After finishing with a 13-21 record last season, the team made some staff changes, bringing in Stanley as the head coach and expanding Catchings’ role to general manager. Catchings is one of the best women’s basketball players in the history of the game and will be inducted into the Naismith Memorial Basketball Hall of Fame this year.

When the WNBA season starts, it will be at Hinkle Fieldhouse, which is located on Butler University’s campus.

Doyle celebrated draft night with her family. After she was drafted, Hawkeye great and current Dallas Wings player Megan Gustafson called Doyle to congratulate her.

Still, Doyle is not a guarantee to make a roster in the WNBA. She said that playing in the Big Ten and against high levels of competition is exactly what you want to have confidence moving forward.

“It’s just going to be another challenge, the biggest challenge I’ve had yet,” Doyle said. “But I’m really excited about it. I like to push myself, and I like when other people push me, so I’m just hoping to get better. I’m going to learn a lot, I know that, so I’m looking forward to it.”