For nearly 30 years, generations of Hawkeyes have entered through the doors of The Union Bar in Iowa City. After a 27-year run, however, the often boisterous party spot has closed its doors. 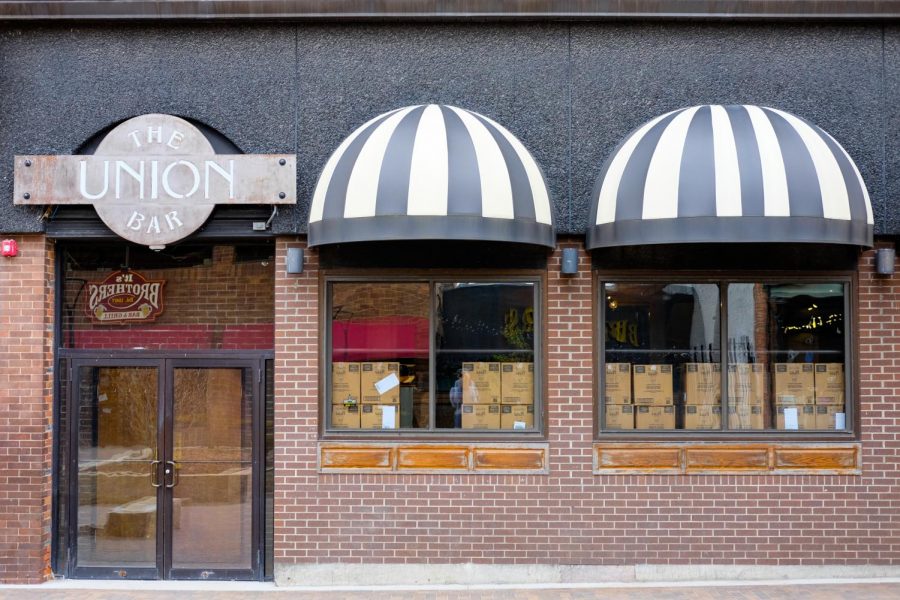 The Union Bar is seen on Thursday, April 9, 2020. After 27 years of operation, the party spot, described as "the biggest in the Big 10" on its website, has closed its doors.

Since 1993, generations of students have filtered through the doors of The Union Bar in Iowa City, located at 121 E. College St. But after a 27-year run, the party spot known for its bright lights, boisterous music, and crowds of Hawkeyes has closed its doors.

Famous for its live music, birthday pitchers, and frenzied atmosphere, the building that houses the bar was purchased in 2017 by the Minnesota-based Tailwind Group, which built The Quarters in Iowa City and other housing developments across the Big Ten.

Iowa-based Backes Commercial Auctioneers shared a Facebook post Thursday stating that “the Union Bar, one of Iowa’s largest night clubs located in Iowa City, has closed.” The company is auctioning of remnants of a once-congregated dance floor and bar, including audio equipment, lights, and beer taps.

Although the bar’s management could not be reached for comment, former Union bartender Brent Tunelius said the bar’s closure is a “bittersweet ending” to a much-loved venue.

“I loved working [at Union],” he said. “That experience taught me work ethic because everything is so fast-paced… Things would go from zero to 100 real quick.”

For Tunelius, a typical night on the job started at around 8 p.m. After making sure everything was ready — on some nights, the bar saw hundreds of visitors — the zero-to-100 adrenaline kicked in.

Jordan Strong, who worked as a Union bartender for two years, echoed this sentiment.

“You really can’t beat that environment — that’s what I thrive for,” he said. “When we had the group meeting where they said it’s closing, I thought it was an April Fools [joke]. The news kind of hit everyone at once.”

He said the spread of the novel coronavirus across the world may have sped up the bar’s closure, but it was anticipated to shut its doors soon before the pandemic prompted closures of nonessential businesses.

In an email to The Daily Iowan, Tailwind Director of Operations Reggie Reed said the group continues to make progress on the downtown development.

“There are currently many variables affecting the timing of this project and we hope to have further updates in 30-60 days,” he said.

According to data from the Iowa City Assessor, the assessed value for both properties is $893,000 and $1.53 million, respectively. Currently, the parcels house Union and clothing store Revival.

Nearly two years after its initial purchase, the group presented the $65 million proposal to the Iowa City Council Economic Development Committee in August 2019 to construct a nine-story apartment complex on the site.

Iowa City Economic Development Coordinator Wendy Ford said in a summation of the Tailwind Group’s proposal that the project would “ensure the historic preservation” of the buildings in question.

“Behind the historic buildings, and separated by a walkway, the developer would build a 9-story, 170-unit apartment building (with studios, one and 2 BR units totaling 186 beds) with 2 levels of parking accessible from the alley,” she wrote in her summation.

Tailwind asked the city for $9 million in tax-increment financing during its presentation. This designation grants a developer a rebate of, or exemption from, a percentage of property taxes for a set period of time. Because the structure falls outside the four to six-story limit for Ped Mall construction, the development does not meet full requirements for TIF funding.

Although the development’s future is still up in the air, Tunelius said one fact will ring true whenever he walks by the site in the future.

“Even if an apartment building goes there, that’s the heart of downtown,” he said. “When I see that spot, I’ll always see Union.”