West Music delivered keyboards to piano students left without access to their instruments, allowing students to continue learning during the online portion of the spring semester. 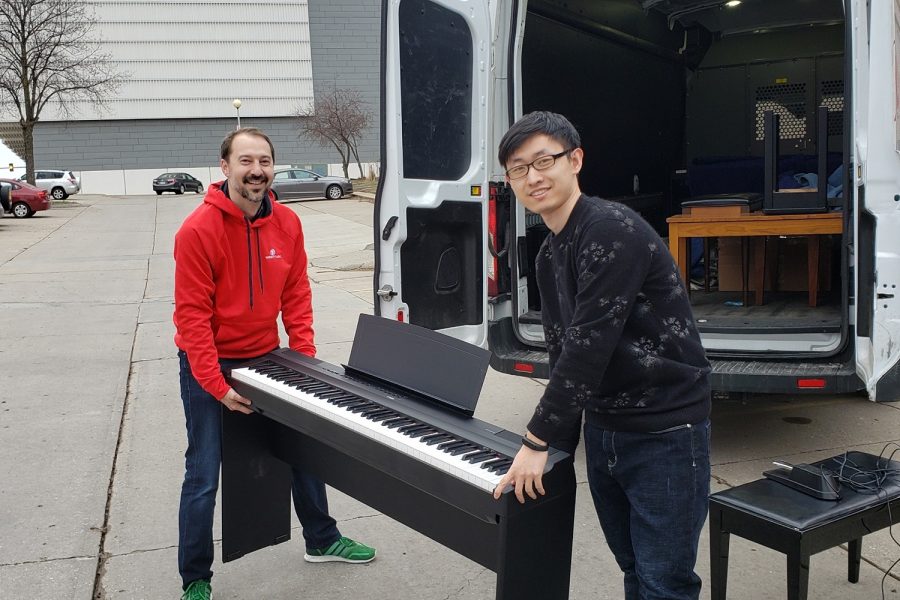 Hawkeyes studying music can end the semester on a high note thanks to a partnership between the University of Iowa and a local instrument store.

A crew of movers from West Music in Coralville delivered the final set of electronic keyboards to UI students practicing piano from home Monday afternoon as part of a project to deliver the instruments to students without pianos at home. This way, students have a way to practice during the UI’s shift to virtual instruction for the remainder of the spring semester because of COVID-19 mitigation measures.

Brennan Plummer was one of 12 UI students to receive a keyboard because of West Music’s project with the UI School of Music. For the sophomore double majoring in piano performance and music composition, the news about the UI starting virtual instruction had hit hard.

“I was honestly really, really bummed out and disappointed,” Plummer said.

After the UI transitioned to online instruction, he and many other pianists in the School of Music suddenly found themselves unable to participate in recitals, chamber ensembles, and one-on-one lessons.

According to the UI School of Music website, the Voxman Music Building is home to 130 pianos and 65 practice rooms for students to use. In response to classes moving online, the UI School of Music’s original plan was to give each piano student their own practice room within Voxman Music Building, Plummer said. However, with the closing of university buildings, a new plan was needed for students who no longer had guaranteed access to a piano.

“You just have the feeling of being lost,” Plummer said of losing access to the provided instruments. “My life is the piano at this point.”

While UI School of Music faculty prepared for the transition to online classes, a Facebook post from the University of Memphis helped spark an idea, School of Music Director Tammie Walker said. The post showed keyboards being delivered to students so that they could continue their studies.

“We worked with the School of Music during the flood of 2008 to try to save as many pianos as possible prior to flooding,” West said. “We also worked with them to help envision and equip the new music building and its reopening.”

West personally joined in to help deliver pianos to the 12 students. Plummer said receiving his keyboard from the company has had a big impact on him.

“It has definitely improved my mood significantly,” Plummer said. “Now I can actually have lessons with my professor.”

While Plummer said piano lessons over Zoom aren’t the same as face-to-face lessons, he is grateful to at least be able to play and learn piano with his professor. Without the keyboard that was delivered to him, he said he isn’t sure what his lessons would have been like, or how his learning would have been impacted.

“I just want to say how grateful the piano majors, myself included, are to the people who organized this,” he said. “It means a lot that they were thinking about us.”