College students claimed as dependents will not receive a direct payment from the government’s COVID-19 relief package, creating a gap as some students struggle to make ends meet. 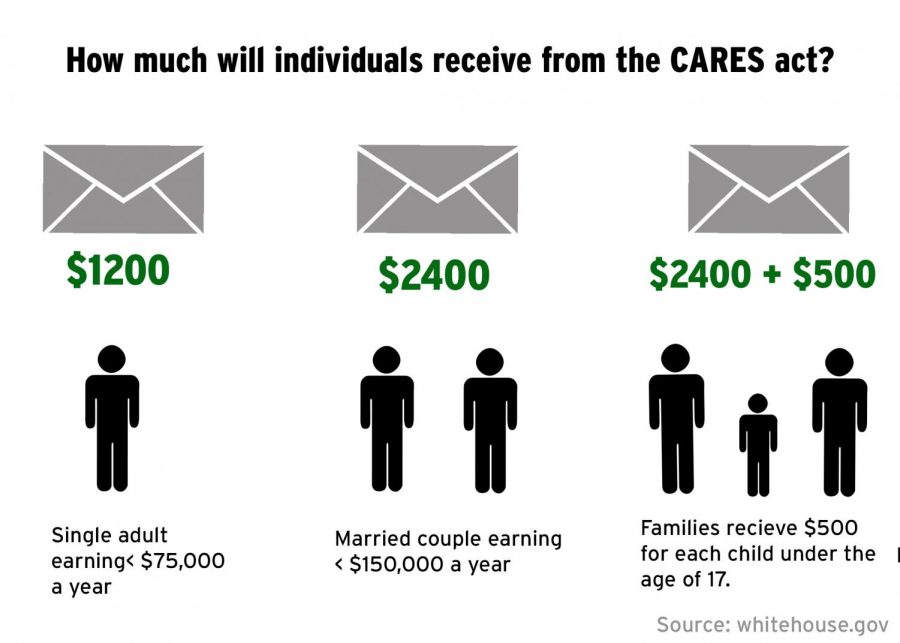 While 22-year-old Kaylie Wilson works full-time during the summer and part time during the school year to pay for rent, groceries, and other day-to-day expenses, she is not financially independent in the eyes of the government.

President Trump signed the largest economic stimulus package in modern history March 27, approving $2 trillion in federal relief to industries and small businesses in the wake of a global pandemic. Within that package is about $300 billion in direct cash payments to adults and children across the U.S.

However, with some college students still claimed as a dependent on their parents’ taxes, many young adults will not receive a direct payment after falling into a gray area where they do not qualify as an adult or child.

“It’s a really big blow to just assume that all students that were claimed as a dependent are getting 100 percent financial aid from their parents who may now, even if that is the case — those parents might be laid off,” said Wilson, a UI senior studying political science and public policy.

The Coronavirus Aid, Relief, and Economic Security Act, or the CARES Act, was part of the third wave of relief voted on by both chambers of Congress and signed by Trump. Individuals earning less than $75,000 a year will receive a one-time payment of $1,200, married couples will each receive a check, and families will receive $500 per child.

Wilson interns at Iowa City Area Business Partnership, clocking between 10 and 20 hours a week tracking bills in the Iowa Legislature that are pertinent to the partnership. She said that on a good month, her internship will cover rent.

“A lot of places, for good health reasons that I totally support, are closed, and a lot of hiring has been slowed down … so, yeah, definitely not expecting to get any kind of career job anytime soon,” said Wilson, who will graduate in May.

The CARES Act does provide some relief for student-loan borrowers and gives payments to colleges and universities, including additional financial aid to those who need it. The act provides more than $30 billion to local school systems and higher-education systems, which includes the additional financial aid and work-study payments to students who cannot work because of COVID-19.

It provides flexibility to universities to use financial aid as emergency grants to continue paying students through Federal Work Study, but each campus would have to take that step individually, according to the office of Rep. Cindy Axne, D-Iowa.

“The university, in coordination with the Board of Regents, is currently reviewing the provisions and will share more details when available,” UI Media Relations Director Anne Bassett said in an email to The Daily Iowan.

The act will defer all federal student-loan payments until Sept. 30, including interest, and there will be no negative credit reporting or involuntary collections during this time.

UI freshman Caleb Slater is in the Army reserves and was supposed to be deployed to South Carolina in May for basic training. With his deployment suspended, Slater will not be receiving any paychecks from the Army and has been trying to schedule some shifts at Hy-Vee in Des Moines.

Slater is among the many college students who will not qualify for a direct payment, but said that since the UI will continue to pay him up to 80 hours for his job in the Catlett dining hall, he will be able to pay for things such as his U-bill and car insurance.

Ian Mariani, Axne’s communications director, said that while this was the largest economic relief package, members of Congress are still working on legislation to provide additional relief during this pandemic. He said for college students who are frustrated with not receiving a direct payment, they should voice their concerns to their representative.

“This is the time for them to use that voice and try and make sure that that’s understood to be a priority for them in this next round of negotiations, and something certainly we’re looking at in terms of what we can do to help more and more folks, because we know this affects everybody,” Mariani said.

When UI freshman Isabella O’Connor learned she would not be receiving a stimulus check, she took to Twitter to voice her frustrations about her current financial situation and encouraged other students to reach out to their representatives. More than 25,000 people shared her Twitter thread, responding with similar concerns about college students being left out.

O’Connor has applied to four different grocery store positions in her hometown of Des Moines but hasn’t received a job offer from Trader Joe’s or Whole Foods. She said she was able to pay off her U-bill this semester through aid she received from the UI’s student emergency relief fund.

O’Connor’s main source of income this year was from her internship with Massachusetts Sen. Elizabeth Warren’s presidential campaign, and once that ended, she began working as a server at Goosetown Café where she was ultimately laid off because of COVID-19 closures. She said she has paid for most of her own things since she was a freshman in high school.

“People need relief, and I don’t think our politicians realize how financially independent college students have to be,” O’Connor said.