University of Iowa Health Care leadership said Wednesday the health-care system is preparing for the event of a surge of patients testing positive for the virus. 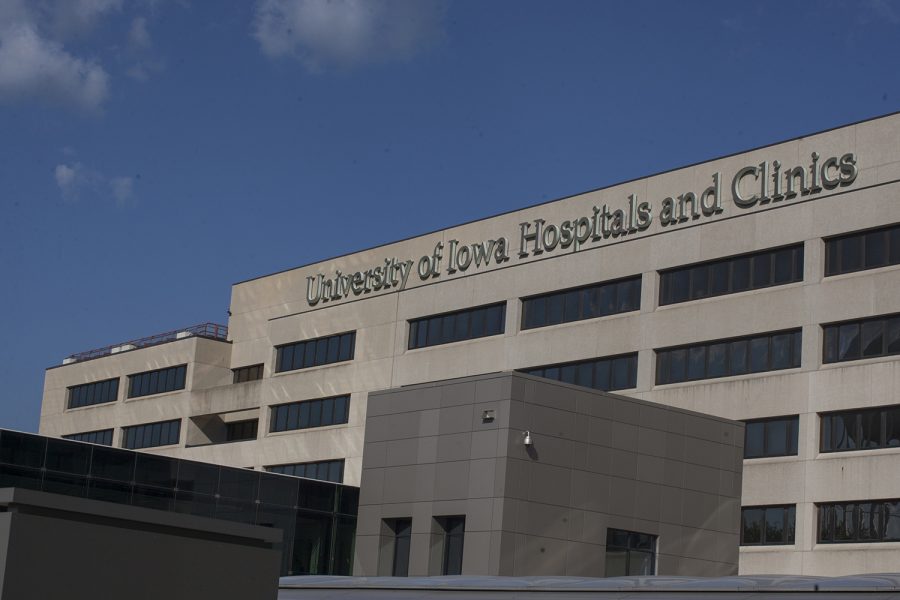 University of Iowa Hospitals and Clinics is seen on Sept. 17, 2018.

University of Iowa Health Care leaders said Wednesday that the enterprise’s response to combatting COVID-19 is expected to take a financial toll of around $50 million, but they’re committed to maximizing resources and staff to deliver the care that’s needed.

UI Vice President for Medical Affairs Brooks Jackson said Wednesday at a virtual state Board of Regents meeting that there are clinical trials already in place for remdesivir, a drug known to have in vitro activity against the virus and that was initially developed to treat Ebola.

Hopefully within the week, he said, the hospital will begin convalescent plasma protocol to take plasma from recovered patients who may have built up antibodies against the virus that could treat new patients.

“I think many [donors] will be very willing to give some plasma that we can give patients that are hospitalized to see if that can really lessen the severity of their disease,” Jackson said. “This concept is not a new one. We have used it for many other viral infections before, with some success. So there’s a lot of hope that this will get people out of the hospital faster.”

Jackson said the UI State Hygienic Lab should soon be able to test between 700 or 800 patients a day. UIHC should be able to double its number of tests every week, he said, because it now has access to three different testing platforms.

The hospital is currently only testing symptomatic patients, he added. Experts and public officials have voiced a need to test asymptomatic patients as well because they may still be carriers of the virus and unknowingly transmit it to someone who may be at greater risk for severe illness or death. This would also help people understand the full scope of the virus and potentially better contain its spread, as South Korea accomplished with a comprehensive testing system.

If the number of coronavirus cases continue to expand for an extended period of time, it could be a real challenge in terms of finance and capacity, Jackson said. Instead of paying 50 cents per protective mask, UIHC now pays $8, and the hospital estimated that the pandemic will ultimately cost it about $40 to $50 million, he said.

RELATED: Iowa City hospitals ramp up efforts to test for and treat COVID-19 ahead of potential surge

UIHC CFO Bradley Haws said that as rules and regulations — particularly those involving funding at the state and federal level — are rolled out, UIHC will be certain to take advantage of any opportunities.

“I can’t sit here today and tell you that I know specifically how much money we might get, or where it may come from,” Haws said. “This will evolve over a significant amount of time.”

UIHC CEO Suresh Gunasekaran said the hospital has cut down two-thirds of its surgeries and 100 percent of its elective procedures, so that only a third of its surgery volume remains. While there may be a built-up demand of patients who need care once the COVID-19 crisis passes, he said, they also may have had a change in employment or health-care benefits by then.

As a result, there will be a need for the hospital to catch up both in terms of care for its patients and in finances, Gunasekaran said.

“I’m not sure the second this is over that our community will be back to what it was the day before this all started,” he said. “That being said, we are looking at multiple ideas to increase capacity, including operating on weekends and nights and other things.”

A major factor in the hospital’s decision to cut down its surgeries so dramatically is to conserve resources and ensure a safe staff, Gunasekaran said.

Among those resources UIHC is monitoring is personal protective equipment. Gunasekaran said consumption goes up and down each day as the patient population constantly changes.

“All staff that are coming into contact with COVID-positive patients, or COVID-suspected patients, are given all of the equipment that they need, every single time, all the way through,” he said, adding that he understands there to be no cases of patient-to-staff transmission of the virus at UIHC at this time.

UIHC officials’ primary concern right now, Gunasekaran said, is the anticipation of a surge of positive cases in the coming weeks and months.

Jackson said that of more than 1,000 patients UIHC has tested, about 7 percent were positive for the novel coronavirus. Many of those tests proved positive for influenza, he said, with the number of flu cases remaining higher than COVID-19.

Thirteen inpatients have been treated for the novel coronavirus at UIHC, and seven have been discharged. As the temperature outside increases, Jackson said he is hopeful that the number of cases will decrease. Heat and humidity slow the spread of the flu, he said, so experts are hopeful that the coronavirus could be affected similarly.

The University of Washington’s Institute for Health Metrics and Evaluation projects 1,367 deaths from COVID-19 in Iowa by Aug. 4, though the model does not account for Iowa’s closures of schools and nonessential businesses.

Gov. Kim Reynolds on Wednesday afternoon challenged the accuracy of this model because it didn’t take those mitigation measures into account.

The estimated surge date for when the number of cases is at its peak is April 30, though state health officials estimate a surge in the next two to three weeks.

In that case, Gunasekaran said he doesn’t want the staff to have to ration its protective gear and resources.

“Today, and this week, are not the worst week that we are going to face,” Gunasekaran said. “So we have to go into a PPE conservation model … but I do feel as though we are doing our best and are definitely beating industry standards for safety and our staff.”

The UIHC Intensive Care unit is typically at a 90 to 95 percent occupancy with 850 beds, but because of the cut to its surgical volume, now has capacity for Iowans in case of a surge. The hospital’s plan is to add up to 150 more beds to serve Iowans by converting various recovery spaces into ICUs.

RELATED: Johnson County Board of Supervisors, Board of Public Health discuss local response to COVID-19

Many of its anesthesia machines can also be converted to additional ventilators to act as assisted-breathing devices, Gunasekaran said.

“The big thing is, it’s not so much about having the space or the equipment,” he said. “It’s having the qualified staff to do this.”

Despite a significant amount of fear, Gunasekaran said hospital morale continues to be high among faculty, staff, and leadership.

While some hospitals nationwide have begun making furloughs to staff, Gunasekaran said UIHC leadership is trying to “do right” by the health-care workers.

“We think that every one of our staff is going to be needed in a surge,” he said. “And so, this is not the time for us to figure out other financials … We’re figuring out how to get patient care done in the most effective way to serve the most Iowans with the resources we have.”