The honor comes after winning the Big Ten regular season and tournament titles and advancing to the Elite Eight. 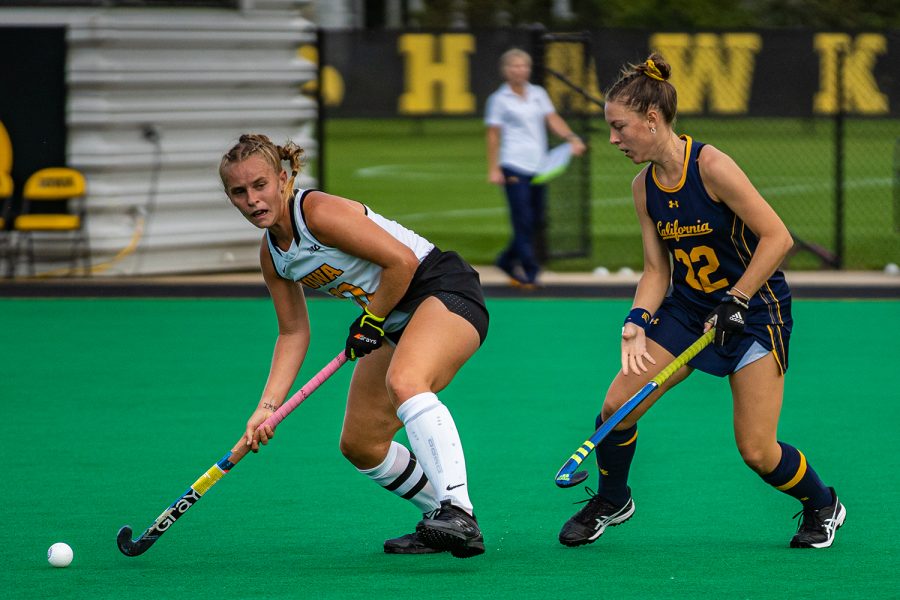 Iowa midfielder Katie Birch looks to pass during a field hockey match between Iowa and California on Friday, September 13, 2019. The Hawkeyes defeated the Bears, 4-2.

After a conference title, a Big Ten Tournament championship, and a trip to the Elite Eight, Iowa field hockey is The Daily Iowan’s 2019-20 Women’s Team of the Year.

The 2019 season was promising from the start for the Hawkeye field hockey team. Iowa was ranked in the top 10 in the nation from the start of that season and remained there. In the first regular-season competition for the Hawkeyes Aug. 30, the team took down No. 10 Wake Forest in the ACC/Big Ten Challenge.

After completing the majority of its non-conference slate, Iowa opened its Big Ten schedule in Iowa City Sept. 27 against No. 14 Ohio State. Against the Buckeyes, the Hawkeyes won 2-1 in the start of a four-game win streak on the home stand. Three of those victories came against ranked conference opponents.

To end the regular season, Iowa won two conference games to clinch a share of the Big Ten regular season title. Against Northwestern Oct. 26, Iowa came back from a 1-0 deficit at halftime to win 2-1 on Senior Day. In the following game against No. 8 Michigan in Ann Arbor, Iowa won 1-0 behind a goal in the 18th minute by sophomore Lokke Stribos.

The regular season conference title was the 13th by the Hawkeyes in program history. It also set the team up as the No. 2 seed in the Big Ten Tournament.

When tournament time came, Iowa made a run.

The Hawkeyes won rematches with Ohio State and Northwestern to advance to the Big Ten Tournament championship game. In the final game, an unexpected opponent was waiting.

Fifth-seeded Penn State was Iowa’s final hurdle before a conference tournament title. The Nittany Lions used upsets to get to the final game and finished the 2019 season with a record of 8-12.

That didn’t prevent a thrilling championship game, however.

At the end of regulation, the contest was tied 0-0. Junior Maddy Murphy scored the game-winning goal 23 seconds into the overtime period to clinch the tournament championship for the Hawkeyes.

The win made it the first time Iowa field hockey had ever won a Big Ten regular season title and a Big Ten Championship in the same season. Only four other Big Ten programs have ever accomplished that feat. It was Iowa’s sixth Big Ten Tournament title in program history.

In the NCAA Tournament, Iowa defeated No. 8 Duke in the Sweet Sixteen, 3-2. The victory came after the Blue Devils defeated the Hawkeyes Sept. 15 in Iowa City. In the Elite Eight, Iowa fell to top-ranked North Carolina, 2-1, to end a stellar season.

Following the season, Birch was named the NFHCA West Region Player of the Year. That honor came after already being named the Big Ten Player of the Year and a unanimous first-team All-Big Ten selection. Birch notched seven goals and 10 assists in 2019 for the Hawkeyes.

She wasn’t the only award winner for the Hawkeyes.

The NFHCA named the Hawkeyes the West Region Coaching Staff of the Year. Iowa head coach Lisa Cellucci had also been named the Big Ten Coach of the Year in her sixth season with the Hawkeyes.

For these accomplishments and many more over the course of the season, Iowa field hockey is The Daily Iowan’s 2019-20 Women’s Team of the Year.