Iowa’s neighbor to the east ordered its residents to stay at home, setting a precedent for other states in the Midwest. However, levels of cooperation vary among residents in Chicago, the state’s and Midwest’s largest city. 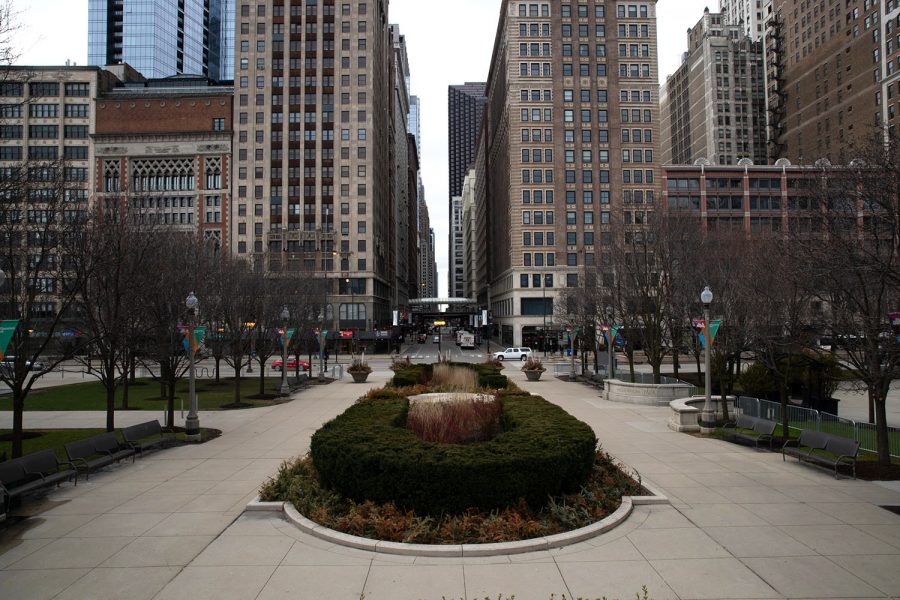 This empty plaza in Millennium Park sits adjacent to the sparsely populated intersection of Madison Street and Michigan Avenue.

On Tuesday, three days after the statewide implementation of a shelter-in-place directive, residents of and visitors to the Wicker Park neighborhood of Chicago walked their dogs, carried overflowing shopping bags, and chatted with friends and partners along the streets.

“Life is different,” said Edvern Daniels, a Chicago resident. “The things that you would normally be able to just get up and go and grab are obviously a little awkward. Dating is at a standstill. You can’t go out.”

Illinois Gov. J.B. Pritzker announced the first statewide shelter-in-place directive in the Midwest on March 20 to prevent the spread of the novel coronavirus. As Iowa contemplates its own stay-at-home order, residents are looking to what’s happening in neighboring Illinois.

Per Pritzker’s directive, which went into effect at 5 p.m. March 21 and will last until at least April 7, “nonessential businesses” aren’t allowed to operate in Illinois and residents are discouraged from traveling outside of their homes, except for necessities like food and medicine.

“I don’t come to this decision easily,” Pritzker said during the press conference when he announced the order. “I fully recognize that in some cases, I am choosing between saving people’s lives and saving people’s livelihoods. But ultimately, you can’t have a livelihood if you don’t have your life.”

Iowa Gov. Kim Reynolds has closed restaurants, bars, salons, swimming pools, bookstores, and a long list of other businesses. She said Wednesday that Iowa was already under the “equivalent” of a stay-at-home order and has maintained that data from the Iowa Department of Public Health doesn’t warrant a complete halt to nonessential travel.

In Iowa City on March 25, a warm afternoon, people were splayed across the steps of the Old Capitol building and walked in twos and threes along the Iowa River as the sun set. Some kept the recommended six feet away, others didn’t.

“This is not a vacation,” she said in a tweet Thursday night announcing the closure.

This is not a vacation.

While most of our residents understand this, some have refused to listen. So for the good of the city, we are immediately closing high-traffic areas of the city until further notice. #StayHomeSaveLives #FlattenTheCurveChi pic.twitter.com/6sN7kSEoWM

The popular trail that was closed as a part of this measure, The 606, runs through Wicker Park and most of Chicago’s 1st Ward, which is represented by Alderman Daniel LaSpata.

“The first afternoon we had above 50 [degrees], had crowds of people out there on the trail… the mayor, I think, wisely realized that parks, by their nature, create these congested spaces,” LaSpata said.

He also said he thought Chicagoans were largely adhering to the order, however, adding that Chicago’s automobile and public transportation levels have been reduced by more than half — train ridership alone, he said, was down 86 percent.

Daniels was out on a shopping run March 24 while trying to maintain normalcy amid the outbreak of coronavirus.

Other residents of the area have taken a more cautious approach, electing to stay indoors as much as possible. Ian Sutherland, a resident of Humboldt Park — one neighborhood west of Wicker Park — stayed mostly indoors last week after a weekend trip to the grocery store.

“I’m lucky enough to have been given the ability to work from home,” he wrote in an email. “I’d just logically rather overreact and be wrong than underreact and get very sick, or worse get others very sick.”

Sutherland said the area’s most popular places had seen a dramatic decrease in foot traffic in the days prior to the shelter-in-place order largely due to their dependence on the service industry. Take a walk down Milwaukee, Damen, Ashland, North or Grand Avenues and it becomes obvious how much this is true. The mostly local hodgepodge of eateries and watering holes has collectively pivoted to carry out and delivery options only.

Antique Taco, a small Mexican restaurant chain in Chicago, saw roughly a quarter of its business come from carry-out and delivery prior to March 17, and they now must conduct all business in this manner. Along with many other places that have had to undergo the same shift, there was a number of temporary layoffs.

The front of house manager currently at the Milwaukee Avenue location, Emma, said she believes that ownership has showed exemplary care for their employees during this difficult time. They conducted an educational session on unemployment and how to apply for benefits. She said they also check in with employees on whether they feel comfortable working.

“If anybody would prefer to stay home because of Corona, they’ve made that possible,” Emma said.

However, that decision backs some service workers into a corner when choosing between income and safety.

“In a broad sense, the COVID-19 crisis is exposing a lot of weaknesses in our cultural and economic safety nets and presenting a lot of challenges,” LaSpata said. “Hopefully when we get on the other side of this, we can think about thoughtful legislation that makes sure that we’re all in a much more stable position.”

Pharmacies and convenience stores like CVS have seen a dramatic increase in business as people stock up in preparation for sheltering in place and self-quarantines. The CVS on Ashland Avenue in Wicker Park has seen “an unsettling influx and people not truly cooperating with things that are beyond us,” according to a shift supervisor, Aeriale Williams.

Multiple signs posted to the front of the store and the entryway warned customers of a limit on items-per-customer for high-demand household items such as toilet paper, paper products, and hand soaps.

“This is not about us. It’s about making sure everybody has what they need when they need it,” she said.

Similar limitations have been put in place across the city over the course of the last couple weeks, as people have rushed to stores to stock up for a potential lockdown.

He also said that the previous week had been hectic at times with rumors swirling of a potential shut down of the city. Now with more direction and knowledge of the situation, he thinks the store rushes should dwindle.

One of downtown Chicago’s most popular areas, the New East Side, which contains a large portion of South Michigan Avenue and parks like Millennium, Maggie Daley, and Grant, has been drastically affected by the coronavirus outbreak. The area relies largely on tourism and now is one of the quieter areas in the city.

One resident of the Aqua Building on Columbus Drive, Jan, said she noticed the drastic shift in traffic recently.

“I can see Michigan Avenue from my apartment and usually it’s like a steady stream of cars. In the morning it’s eerie to look out and there’s maybe a taxi or a bus and that’s it.”

“Cloud Gate,” a sculpture in Milennium Park colloquially referred to as “the bean” due its shape, has been enclosed on all sides by a short fence about 50 feet away. Usually enveloped by throngs of tourists taking selfies in its reflective surface, it now stands alone in the center of a mostly desolate park.

Some tourists still made the trip to Milennium Park in the hours before the shelter-in-place directive went into effect on Saturday to take advantage of the free time they had in the city.

Illinois State University-Bloomington student Alejandro Cuellar-Mayoral stopped to see Millennium Park with his friend Julio Rosabal after flying into O’Hare airport from their home in Miami.

With a two-week notice to remove his things from the residence halls, Cuellar-Mayoral had to make a hasty but cheap trip to Chicago. A round trip ticket from Miami to Chicago only cost $40 each for the two friends.

As far as life after returning to Florida, which hasn’t ordered its residents to stay home, Cuellar-Mayoral suspects that it would be pretty similar to life in Illinois.

“I’m pretty sure our governor is gonna do the same precautions that J.B. Pritzker has done, so we’re all gonna just kind of stay home,” he said.

Another two visitors to Milennium Park on Saturday, Nabeel Amer and Hayley Barron, both Southern California natives studying in Chicago, took the time to sight see amid an unknown work schedule as medical students doing rotations at Mount Sinai Hospital.

“We got to do about two weeks in the hospital. And now we’re not sure if we’re gonna get to do our next rotation. They might shut that down next month and if they do, I guess we’ll just go home,” Barron said.

Amer had never been to Chicago before the start of his rotations and hadn’t had time to be a tourist so he looked to make the most of the time that he now had to explore. “I know we shouldn’t be out but it’s nice to see the city without all the hustle and bustle,” he says.