As the state dials up efforts to contain the novel coronavirus in Iowa, hospitality and consumer industries are seeing massive layoffs and unemployment. The long-term economic effects are still unclear, and largely depend on how long business closures last. 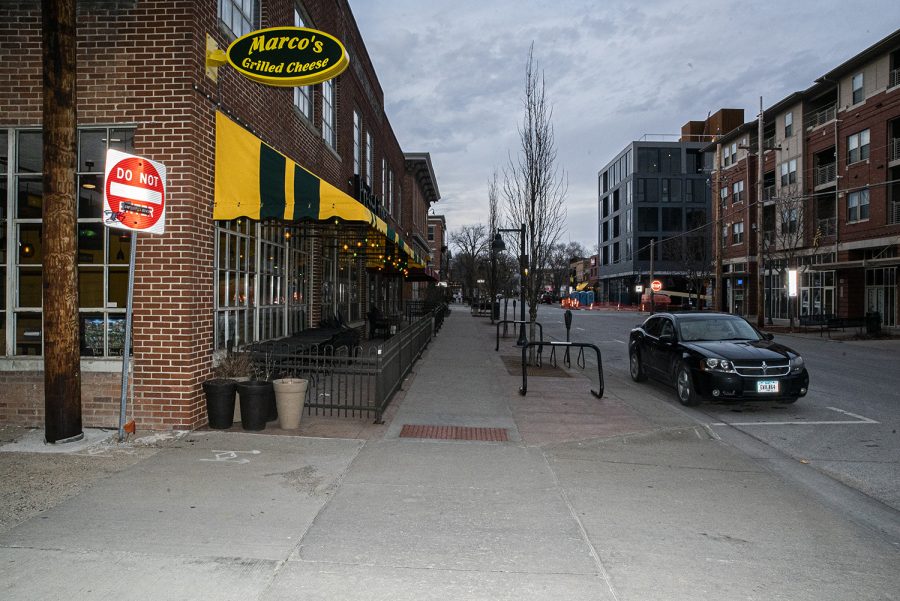 North Dubuque St. is seen on Tuesday, March 17th, 2020. The spread of coronavirus in Johnson county has been named a public health emergency.

Iowa may be one of the less densely-populated states in the U.S., but consequences from state efforts to contain and mitigate the spread of the novel coronavirus has taken a toll on some of the state’s largest industries.

Iowa, along with the rest of the country, saw a massive increase in new unemployment claims last week. Data released by the U.S. Department of Labor on March 26 show that unemployment claims in Iowa reached 41,890 for the week that ended March 21, up from 2,229 the week before. 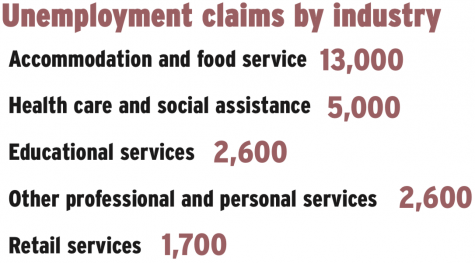 The largest share of new unemployment claims — more than 13,000 — came from the accommodation and food service industry, Iowa Workforce Development Executive Director Beth Townsend said in a press conference with Reynolds this week.

A historic $2 trillion federal stimulus bill passed both chambers of Congress and was signed by President Trump on March 27, providing direct cash payments to Americans and extending unemployment benefits.
Restaurant industry devastated
A survey done by the Iowa Restaurant Association found that 35 percent of food service establishments in the state are closed, and 82 percent of restaurants and bars have laid-off employees. Revenues across all types of restaurants are down 84 percent compared to March 2019.

According to Iowa Workforce Development, 137,200 people were employed in the leisure and hospitality industry in January, about 9 percent of nonfarm jobs in Iowa.

“It’s grim, there’s no two ways about it.” said Jessica Dunker, President and CEO of the Iowa Restaurant Association.

Dunker said that even with state and federal aid to help people keep their doors open or reopen later, she’s expecting at least 15 percent of Iowa’s 6,300 bars and restaurants to close permanently.

“That would be best case scenario,” she said. “If this goes on and on, we could see upwards of a third, or 2,000 to 2,500. And that would be completely devastating to the industry.”

Dunker said that in larger metro areas, like Des Moines or Iowa City, new restaurants will likely open to replace those that go bankrupt, but that may not be the case in rural areas, which sometimes have only a few restaurants that don’t see large profits.

“I worry in the long term about what happens to the communities in rural Iowa, when we see what could potentially be hundreds and hundreds of these locally owned, Main Street businesses close,” she said.

Aid for businesses affected by coronavirus-related closures has come from both the state and federal governments, but Dunker said more action is needed to help restaurants weather the crisis.

On the state level, Reynolds has set up a Small Business Grant Relief fund, which will provide grants of between $5,000 and $25,000 to businesses with less than 25 employees. Some taxes have been deferred for restaurants and hospitality establishments as well.

This bill is the largest economic stimulus package passed in modern history. Trump signed the third and final phase on March 27 after a week-long partisan battle in Congress.

Still, putting money in Americans’ pockets may not be as effective as it would be in a traditional recession, Kanago said. With large swaths of consumer businesses shut down, people don’t have as many places to spend their money.

Because of the nature of the current economic crisis, Kanago said the economy may recover more quickly than in a traditional recession. Previous recessions saw a gradual increase in unemployment rather than a single spike in specific industries, and the recovery was gradual as well.

“It probably means that the recovery will be more sudden,” he said. “Assuming that eventually it gets to a point where social distancing is not so necessary, then the economy will likely rebound much quicker.”

Interactive Timeline: Governmental action in regards to the coronavirus

Flatten virus curve to flatten depression
As for the long-term effects of the pandemic, it’s too early to tell, Iowa State University Professor of economics David Swenson said.

Businesses report earnings on a quarterly basis, so the effect on businesses and GDP won’t be known until well into the second and third quarters, Swenson said.

The largest determinant for how bad the damage will be is how long it takes to get the COVID-19 outbreak under control and get back into normal economic activity, Swenson said.

Swenson said the biggest concern is a collapse in consumer spending, which accounts for around 70 percent of the economy. Consumer spending includes things like real estate payments, health care, food, and retail shopping.

“We’re right now at the initial crisis period, and how well we manage this crisis period really determines the magnitude of economic contraction to expect down the road,” he said. “If we can flatten the curve on the coronavirus, we flatten the depression that we dig into the economy as a consequence of it.”