Many student employees at the UI left campus to make other arrangements to remain financially stable. Now, the UI has announced it will keep students on their regular payroll through the end of the semester. 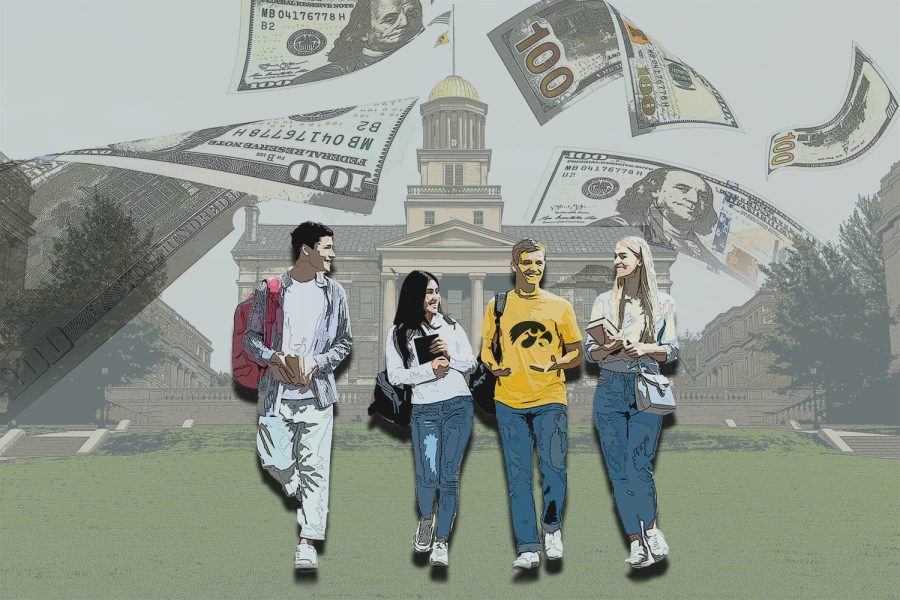 When the University of Iowa announced March 18 that classes would remain online for the semester, many student employees packed up to go home or began looking for other jobs in an effort to remain financially stable.

However, the UI announced March 27 that students with a fixed term of employment, such as resident assistants, and student employees who work hourly and receive biweekly pay will continue to get paid throughout the semester, even if the COVID-19 outbreak prevents them from doing their jobs.

Hourly student employees who cannot work will receive pay for up to 80 hours of the time they would have been expected to work, and students who qualified for federal work-study will continue to be paid, in keeping with the Federal Work Study Electronic Guidance, according to a university-wide email.

Saige Kolbe, a first-year student studying linguistics, was set to start her job swiping student IDs at the Hillcrest dining hall after spring break to save up for a down-payment on her new apartment. She moved home to Sioux City, Iowa with the intention of looking for a job at HyVee, despite the seriousness of the pandemic.

“It stinks because I don’t exactly know who to point a finger at,” Kolbe said. “It’s not like there’s anyone really to blame, but it just feels unfair that all this is happening.”

Kolbe was under the assumption that she would not be compensated for lost hours because she had not heard anything from the UI. She said she was willing to work in a public space such as a grocery store because she knows she is in a lower-risk category for contracting the novel coronavirus, and because she needed the money for a security deposit.

“Luckily, I was able to work it out,” she said. “I’m in a position where I could take care of it, but it was really frustrating.”

Before delivering the news about continuing to pay employees, the three regent universities set up emergency funds to aid students and health-care providers at the UI Hospitals and Clinics during the pandemic, which are open to donations. Students can receive funds to help ease food insecurity, travel and technology expenses, or other challenges students might have.

UI media-relations Director Anne Bassett wrote in an email to The Daily Iowan that campus leadership and University Human Resources conferred with the Critical Incident Management Team and the state Board of Regents, and “reviewed relevant state and federal law,” to determine whether or not students would maintain their paid status.

“Leadership’s discussions and decisions on pay practices were guided by agreed-upon principles, which included but was not limited to keeping all employees in paid status, maintaining the safety and well-being of employees, and providing employees with the opportunity to continue to contribute to the university’s mission,” Bassett said in the email.

The email did not outline the chain of communication of information about worker pay to employers during this time period.

Ashlyn Neppl, a UI senior studying psychology and criminology, worked as a student clerk in the UIHC cancer center, along with a research position at the Public Policy Center. Neppl moved to her home in Ames to save money on groceries and other day-to-day expenses under the impression she would be without pay for a portion of the semester.

“Our main panic came from that first day,” Neppl said, adding there was some confusion and anxiety among her coworkers while they waited for more information from the UI after the initial announcement.

The UI initially announced before spring break that classes would move online for only two weeks. For many students on campus, this created a level of uncertainty as other universities across the country were making the early decision to go virtual indefinitely. The UI announced the permanent move to online classes March 18, five days into spring break.

Farino said this was a relief, because he will still be able to afford his rent and utilities in Iowa City. He said that if he had lost his job — a reality many students were living in for the last several weeks — he would have turned to his parents for financial help.

But with a shelter-in-place mandate in his home state of Illinois, he said there could be some gray area with his parents’ employment statuses.

“For a brief period of time, I was kind of in shock and a little worried about paying utilities every month and making sure that I would still be able to keep up with my payments and everything,” Farino said.