To reduce the risk of spreading COVID-19 within the Johnson County jail, the Sheriff's Office is trying to reduce the number of inmates the jail holds at a time. 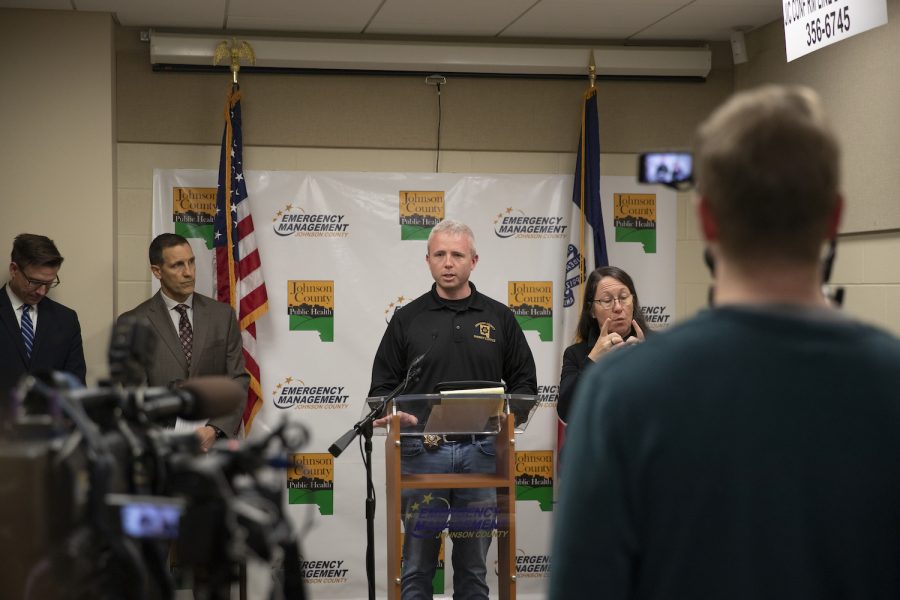 Johnson County Detective Sgt. Brad Kunkel during a press conference about COVID-19 at the Joint Emergency Communications Center in Thursday, March 12, 2020. Kunkel said that jails are screening inmates and arrestees and are watching for signs of COVID-19 that would warrant further screening. (Hayden Froehlich/The Daily Iowan.)

Johnson County Sheriff Detective Sgt. Brad Kunkel said in a press conference Friday that the county jail is taking steps to house less people to reduce the risk of COVID-19 spreading among the close quarters. The jail is currently housing 28 people, down from the mid-30s last week, Kunkel said.

“Every day we seem to be pushing that number down a little bit,” Kunkel said. “We’ve had a great relationship working with the courts and with the Department of Corrections to try and release some of those folks that we can to keep that census number down.”

He said the jail’s daily intakes were also going down as more people are staying in their homes.

In addition, he said, officers are looking for alternatives for those arrested so they don’t need to be held in jail and at close quarters with other people, such as changing the day of their initial court appearance, or issuing a citation and release instead of housing them in the jail.

“Law enforcement has undergone a pretty large change in operation, and a lot of that has to do really with just exercising discretion and evaluating those instances — does someone need to go to jail or is there another alternative to begin with?” Kunkel said.

Part of this effort to reduce the number of people in the jail is because of the jail’s size. County officials have pushed for an expansion to the jail for at least the last decade — Johnson County rejected a $23 million jail expansion in 2010.

“Social distancing in a jail is hard to begin with, particularly our jail, because it’s old and has been overcrowded for a long time,” he said. “This is about as good as it can get to distance people as we can, again because the population is so low.”

He said the jail screens inmates for symptoms as they come in. If they are symptomatic, they would isolate that person and ask for a test.

“We tested one person in the last week, I believe, and that person tested negative,” Kunkel said. He added that one Sheriff’s Office employee — unconnected to the jail — also tested negative.