The Iowa City City Council and Johnson County Board of Supervisors are transitioning their weekly meetings online after closing government buildings to the public. Councilors and supervisors hope the “ease” of virtual access will encourage more public participation, despite opposition from community members about technological literacy. 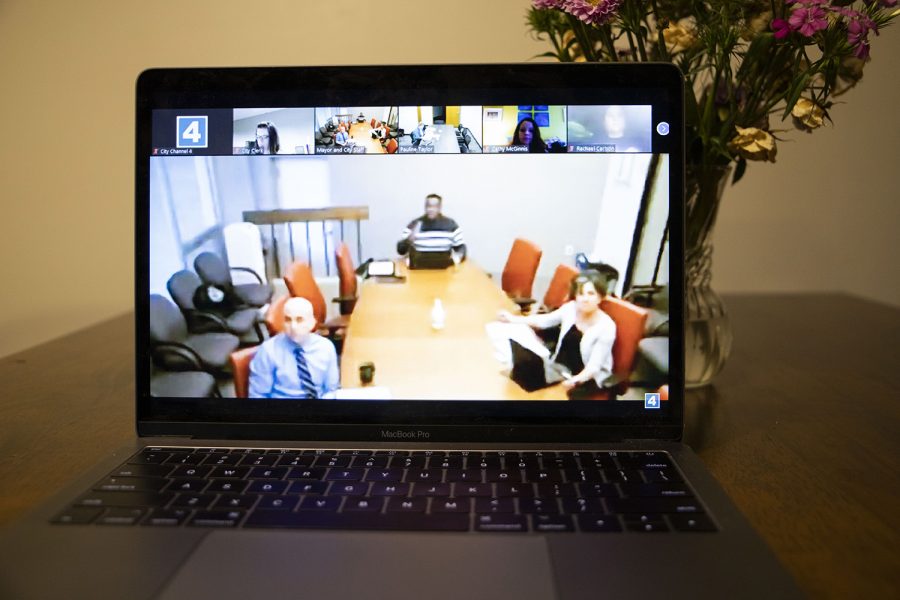 City Council convenes virtually on Tuesday, March 24, 2020. Iowa City residents could tune in on several online platforms and write in for public comment.

The Iowa City City Council and Johnson County Board of Supervisors are transitioning their regular meetings to a virtual format in an effort to allow for public access and participation amid the COVID-19 outbreak, which has closed public buildings for staff and community safety.

The city council had its first meeting since the change on Tuesday and operated through the video-conference application Zoom. Each city councilor and staff member called in from their remote locations — some with backdrops of kitchen cabinets or decorative wall hangings — except for Mayor Bruce Teague and two staff members who attended the meeting from a conference room in City Hall.

As everyone adjusted to the new online format, sometimes city councilors accidentally turned their mics off or leaned in close to the camera, faces filling the screen.

“This is kind of the new way of the world across the globe,” said Teague during the Tuesday meeting. “So, we’re very cognizant of the challenge that it may be for some to join us via Zoom and we’re going to be careful as we navigate tonight. If [someone from the public] wants to speak, we want to make sure that [they] have that opportunity.”

A March 20 declaration by Iowa Gov. Kim Reynolds put into writing that local governments were allowed to meet electronically as long as they gave the public ample notice and a way to participate.

The livestream could be viewed on City Channel 4, YouTube, and Facebook. To participate in the public-comment sessions, community members were required to email or call ahead of the meeting, state their full name and the agenda item they intended to comment on, and wait for a Zoom invitation.

City Councilor Janice Weiner said it’s important the council does everything it can to keep government and all public services running. It’s also especially important to have good communication with the public, she said.

Community member Jerry Laufer called in to comment on a lease agreement with MidAmerican Energy Company for a solar-energy system at Waterworks Prairie Park and voiced his opinion on the council’s transition to Zoom.

“Clearly the council and citizens have far more important matters that are demanding their attention now and require action by the council, and this technology is — for all of its virtue and for how seamlessly it so far has worked — it is new and deeply unfamiliar and challenging to most of us,” Laufer said. “It stands as a considerable impediment to public participation.”

The Johnson County Board of Supervisors has live-streamed meetings in the past, and its first remote formal meeting in response to coronavirus will take place March 26.

The board had a transition period during its March 19 meeting where they limited the number of people in the room to 10 per a mandate from Iowa Gov. Kim Reynolds banning gatherings of groups larger than 10.

With five supervisors and two support staff members, only three members of the public were allowed in the audience at a time while others waited in the hall until their contested item appeared on the agenda, Supervisor Lisa Green-Douglass said.

Moving forward, Green-Douglass added, meetings will be strictly virtual for public participation. Members of the public can call in to participate directly during public comment or send in emails, which can be sent until the beginning of the meeting, about what they wish to discuss during the public comment period.

The only in-person aspect of the meeting will be the two supervisors and two support staff members present in the boardroom per Iowa Code, she said, which requires at least one person to physically be at the location of a meeting in situations requiring that it be remote. Supervisors will rotate the in-person duties weekly and the remaining supervisors will call into the meetings remotely.

Green-Douglass said the supervisors haven’t received many complaints about access since the public building closure, with the exception of two men at their March 16 meeting who voiced their frustrations about the closure of the sheriff’s office, which caused a delay for issuing gun permits.

Because of public-comment rules, she said, the board couldn’t respond because it would be in violation of open meetings and waited instead to address what the pair had said.

“The very next item on the agenda was the county’s response to COVID-19, and so I said, ‘We have a certain amount of authority — we don’t have any kind of authority whatsoever over other elected offices [such as the] sheriff, treasurer, auditor, recorder, [or] attorney,’ ” Green-Douglass said. “But that was the only negative response we’ve had.”