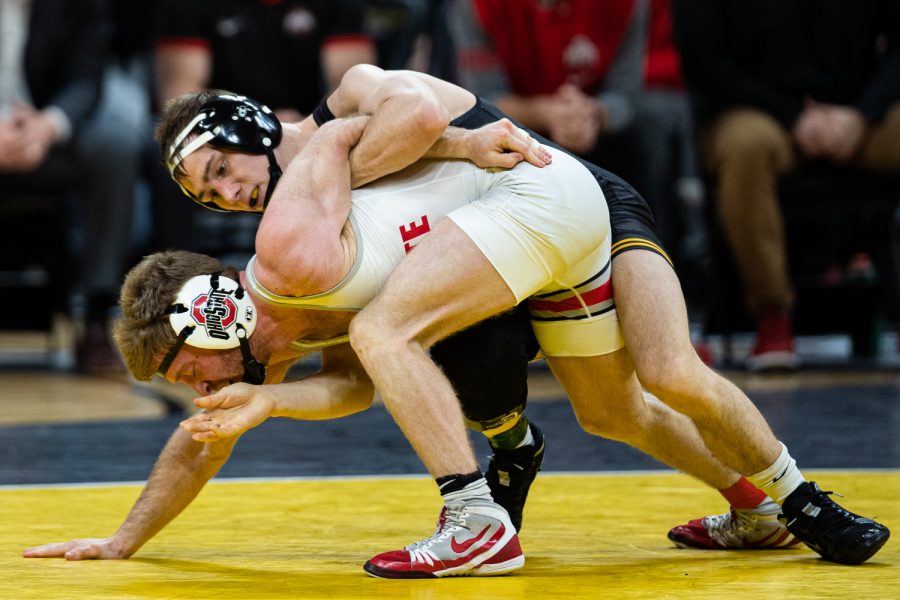 Iowa’s 125-pound Spencer Lee wrestles Ohio State’s Hunter Lucas during a wrestling dual meet between No. 1 Iowa and No. 4 Ohio State at Carver-Hawkeye Arena on Friday, Jan. 24, 2020. No. 1 Lee defeated Lucas by technical fall in 2:32, and the Hawkeyes defeated the Buckeyes, 24-10.

The NCAA announced the winners of its postseason wrestling awards Tuesday morning. Among those honored was Iowa’s Spencer Lee. The 125-pound junior was named Most Dominant Division I Wrestler.

Lee earned nine technical falls and four falls this season, scoring bonus points in 17 of the 18 matches he wrestled on his way to a Big Ten title at 125-pounds.

In addition to Most Dominant Wrestler, the NCAA handed out awards for most falls and technical falls. Lee’s nine technical falls are the most registered by a Hawkeye wrester since 1999 and good for second-most in the NCAA this season. George Mason’s Alex Madrigal finished in first place with 14 technical falls.