Iowa hasn’t issued a shelter-in-place order. What is it?

Johnson County is largely looking to the state for whether to put in place a shelter-in-place order. 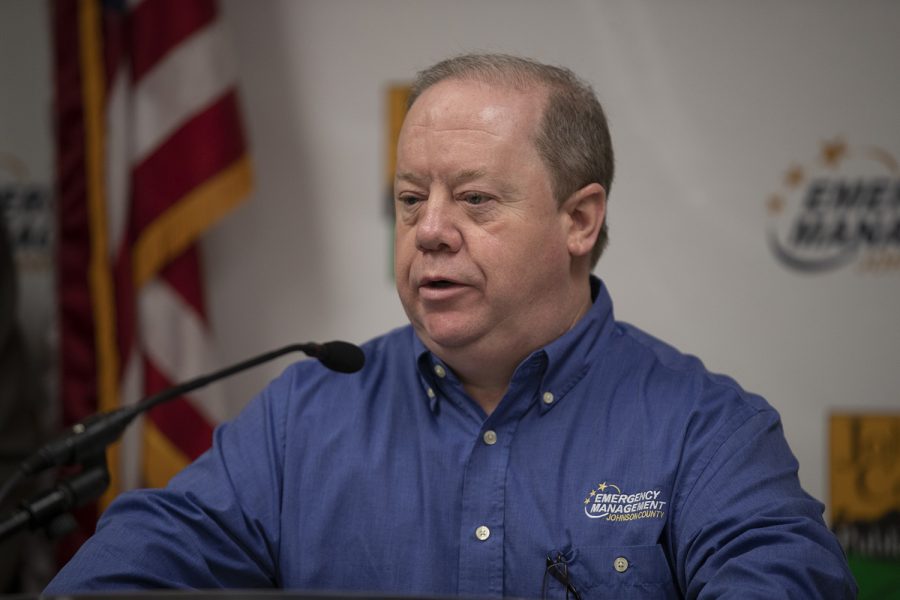 County and city governments are looking to Iowa Gov. Kim Reynolds on whether to issue a shelter-in-place order as neighboring states put in place mandatory bans on nonessential travel, while some are weighing declaring one on their own.

Reynolds has said she’s not considering a mandatory stay-at-home order, citing metrics such as Iowa’s hospitalization rates, the rate of Iowans sick from the novel coronavirus, and how many people may be most at-risk from COVID-19.

The governor indicated on Monday that localities have the power to declare their own stay-at-home orders. However, in interviews with The Daily Iowan Tuesday, officials in Johnson County, which has nearly one-third of Iowa’s COVID-19 cases, said they were largely following guidelines from the state.

“If we’re going to do it, I would hope it would be done by everybody,” Johnson County Supervisor Chair Rod Sullivan said Tuesday, adding that in previous discussions with mayors and public health officials, there have been a lot of questions surrounding the order, and how it would work.

At least 12 states, including Illinois and Wisconsin, have issued statewide, mandatory stay-at-home orders in order to stop the spread of COVID-19. As hospital officials prepare for a possible surge of patients, community mitigation efforts such as limiting interactions with others alleviate pressure on a health-care system short on personal protective equipment and respirators to treat patients.

In Illinois, the Chicago Tribune reported that the shelter-in-place order, put in place after the state reached 585 positive COVID-19 cases, was “a dramatic-sounding move, to be sure, but one that largely codifies the previous recommendations and rules issued by state officials.”

Residents can still go outside for groceries, medical care, or to get fresh air, but must stay home otherwise.

Banks, gas stations, grocery stores, hardware stores, medical offices, and pharmacies remain open in Illinois. Residents can still go outside to exercise, get medical supplies, groceries, or conduct work for essential businesses. Playgrounds and state parks are closed, but local green spaces remain open at the discretion of the jurisdiction.

In some states, local governments ordered residents to stay home when a statewide directive wasn’t issued.

In California, six bay-area counties declared a “shelter-in-place” order for residents before the state mandated all Californians to stay home. Despite not having a state-wide order, St. Louis and Kansas City, Missouri both ordered their residents to stay home unless absolutely necessary.

On Sunday, the mayors of Iowa City, Coralville, and North Liberty on Sunday urged their residents to stay home except for necessities.

However, that wasn’t a mandatory stay-at-home order like Illinois has in place, Iowa City City Manager Geoff Fruin said.

He added that Mayor Bruce Teague does have the authority to declare a stay-at-home order for Iowa City. According to the Des Moines Register, Teague said he would like partner with the governor in giving the order for Iowans to stay at home, though hasn’t ruled out setting a shelter-in-place directive for Iowa City.

“Through this entire crisis there’s been a number of ideas,” Fruin said. “Pretty much everything’s been on the table and the mayor, the elected officials, and staff were consulted with health officials and other agencies working on this and trying to vet all those decisions. You’re talking about facility closures, program suspensions, service modification, travel guidance and shelter-in-place.”

Des Moines Mayor Frank Crownie and Cedar Rapids Mayor Bradley Hart have called on the governor to issue a statewide decree to keep Iowans home according to the Register and the Cedar Rapids Gazette respectively.

However, she emphasized that Johnson County officials were “really not there yet,” in terms of ordering residents to stay at home.

“We are not doing that right now, we are still at the place of just really encouraging everybody to stay in for their safety and their neighbors and their friends and family and everybody else’s safety, but we don’t have that in place right now,” she said. “It (shelter-in-place order) is something that really scares people, I think.”

She added that Johnson County supervisors have a curfew ordinance that they could enact in case of an emergency, as well as an evacuation order that came about from the 2008 floods.

Johnson County Emergency Management Director Dave Wilson said the county and state health departments were developing “triggers” such as rates of hospitalization that, if met, public-health officials would declare a shelter-in-place order.

However, he said it was difficult to compare Iowa, and even populous Iowa City, to metropolitan cities that have heavy use of shared public transportation and dense clusters of individuals.

Iowa Department of Public Health Deputy Director Sarah Reisetter reiterated that sentiment in a Tuesday press conference, emphasizing that the department was using several different metrics in conjunction to decide whether a shelter-in-place order was necessary.

“We do not believe it is a mitigation measure that is necessary in Iowa at this time,” Reisetter said. “It is important to understand that sheltering in place for two or three weeks will not cause the coronavirus to go away.”

She said the department was assessing the following four criteria every day on whether to make a shelter-in-place decision, though she didn’t specify thresholds for any of the categories when pressed.

“We would look at all those factors together,” she said. “It’s not just, for example, if we have 15 hospitalizations in a particular county. We look at all four of the factors in conjunction with each other to make those sorts of recommendations.

Percent of population that is over the age of 65. She said that metric tells the department how many members of a particular community may be vulnerable to the virus.
The percentage of identified cases that require hospitalization — this tells the department how critical the cases of the virus are. On Monday, the most recent update, Johnson County health officials said just one person in Johnson County was being treated for the coronavirus. Statewide, Reynolds said there were 23 people in Iowa who were being treated in the hospital as of Wednesday.
Rate of infection per 100,000 Iowans in the past 14 days — two weeks is the incubation period for the virus, she said, so this shows how many active cases there are for the state.
Number of outbreaks in long-term care facilities or other places with vulnerable people — clusters of illness that occur in facilities with vulnerable communities.

Iowa has had 23 hospitalized for COVID-19 and one death. In Johnson County, one person remained in the hospital as of Monday. Iowa’s case count is at 145, with 43 of those individuals residing in Johnson County. Twelve people in Iowa have recovered and been discharged from the hospital.